Since the start of the year, I’ve been participating in a weekly photography challenge in an attempt to improve my photography. Although I shared them on Flickr, I wasn’t blogging about them. Perhaps it was because of a lack of confidence of their quality, not liking their originality, or just fear of ridicule. Overcoming all that, I’d like to share last week’s photo. It’s all about fun! 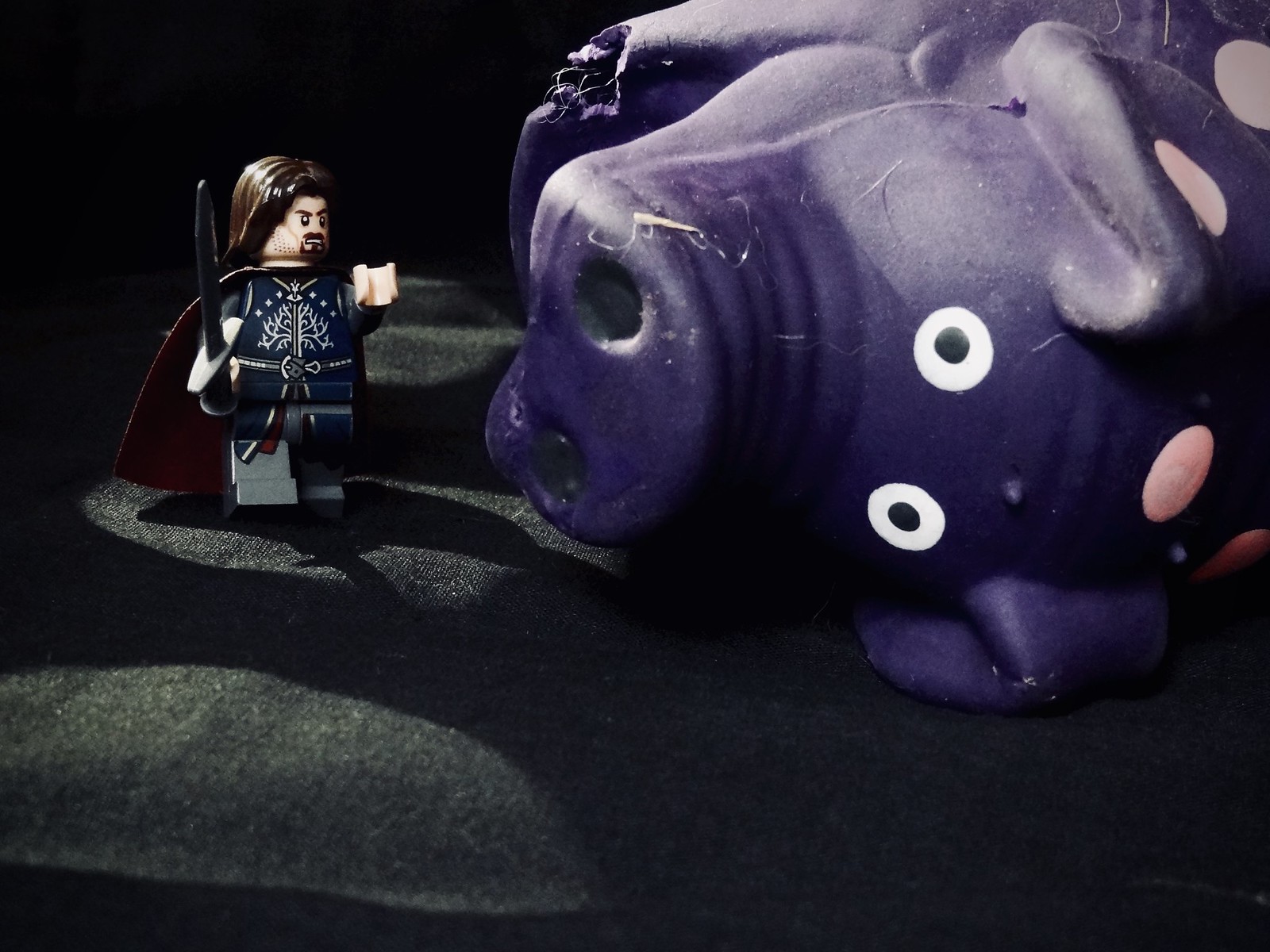 Seeking inspiration.
The challenge I’m using is from Dogwood Photography. It is a 52 week challenge, their third year running. The goal of last weeks photo was vision: alternating rhythm. The challenge was to use alternate patterns of light to bring depth and rhythm to the photograph. I was lost for awhile, trying to figure out what to do. I actually took a couple of different photos, but wasn’t happy with the result. Then, while playing with the dogs, I came up with an idea.

The cute purple and pink polka dotted pig was the prefect beast to use in a scene. I was planning to leverage one of many LEGO mini figures as the key to the scene. I landed on this Aragorn from an old Hobbit set. Yet, the scene wasn’t the key. it was the lighting.

In my head, I wanted a darkened scene with circles of light illuminating the battle. I had the idea pretty well thought through, but wasn’t sure how to light the scene. Again, inspiration struck. This time, I was doing laundry. While folding the clothes, I wondered about the holes in the basket and if they would work. Although they aren’t quite circular, they’ll do for what I need.

Setting the Scene.
I’m kicking myself of not taking a picture of the setup. But, I’ll do my best to describe it. I started by creating a base and covering it with a dark blanket. This will become the floor for the fight. I then placed the beast—aka pig—on it, and then positioned the warrior.

The next step was to setup the lighting. I positioned the laundry basket on a box to give it height. I used my iPhone’s camera flashlight to light the holes. I attached it to an tripod and positioned it until circles of light matched what I wanted.

The last step was the hardest. Placing my Sony camera on a tripod, I starting snapping pictures. Nothing looked quite right, so I kept moving things around. I tried different angles, different lighting, different positions. In the end, I landed on the image above. A bit of fun, a bit silly, and it fits the lighting challenge I was given. Mission accomplished. Now, about this week’s photo.