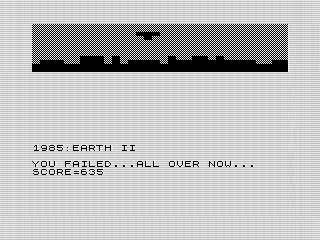 October’s program is one of my later games from 1985 which is aptly named 1985. It has decidedly simple game mechanics. Set in an alternative reality, the Earth is gone in this version of 1985. Humans are colonizing Earth II, but you need to clear the mountains for agriculture needs. Yes, your job is to hit any key to clear the land. Things couldn’t be easier, right?

Wrong. To shake things up a bit, you are in a ship that is flying over a moving mountain range. You need to carefully clear each mountain, one layer at a time. If you try to clear already cleared land, you’ll breach the planet and cause your game to end. On top of that, there is some air turbulence that shakes your ship around from time to time. Simple mechanics, but a lot harder than you’d think. Note that you only get a 100 moves, but you only need to clear 20 mountains. I did it once just to prove that you can. Think you can do better, then go give it a try.

From a programmer stand point, the game actually works well because of its simplicity. I don’t have to poll the keyboard much. Moving the land is a simple string manipulation that is pretty fast when only moving a single line. A simple random routine bounces the ship around. Because there is no missile to display, the graphics are smooth with only the cleared land to show you that things are working. Short, sweet and actually a bit fun!

Until next month, enjoy the game!