Last year is over, but it was one of my more prolific years for LEGO renders. I ended up sharing 67 renders on Flickr, plus a few other renders I did only for Mecabricks. I even have a few test images squirreled away I won’t be sharing. As we close out 2017, here are the last of the images from December.

31075 Outback Adventures—fun with decorations.
Starting us off is this great little build released in November. Although on backorder at the time, thanks to matthieu, I could still render it! 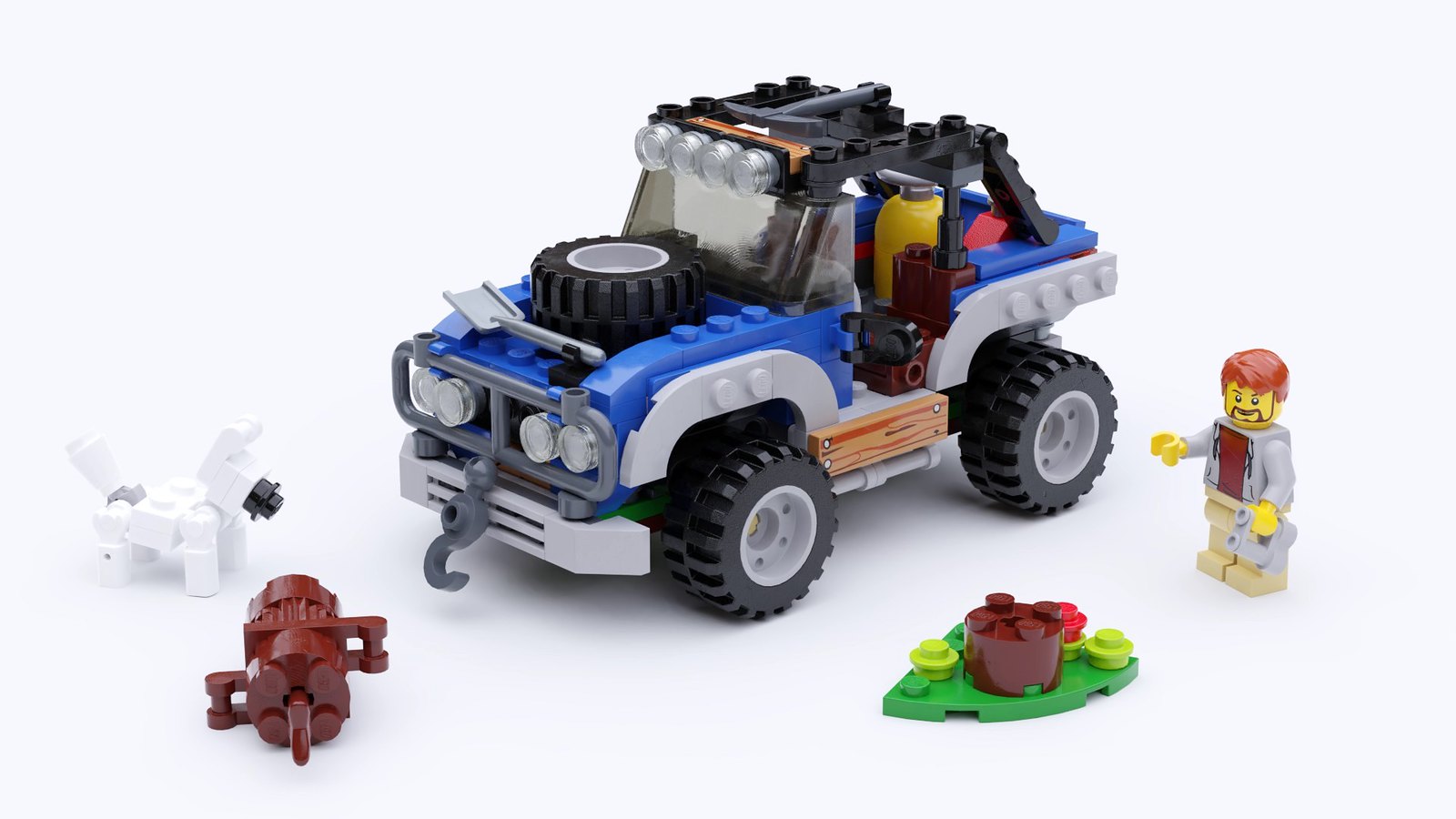 I spent some time tracing the wood grain for the missing printed tile brick. After a few corrections, I uploaded the final decoration to Mecabricks, allowing mattieu to complete the set.

1590 Breakdown Assistance—adding a new plate.
Looking for something different, I ran across this promotional release from 1982. Built in Mecabricks and rendered with Blender, I tried a new HDRI to see how it would improve the image. I fixed the curve plate, building a new image to replace the version in Mecabricks. Unfortunately, the studs aren’t quite right. 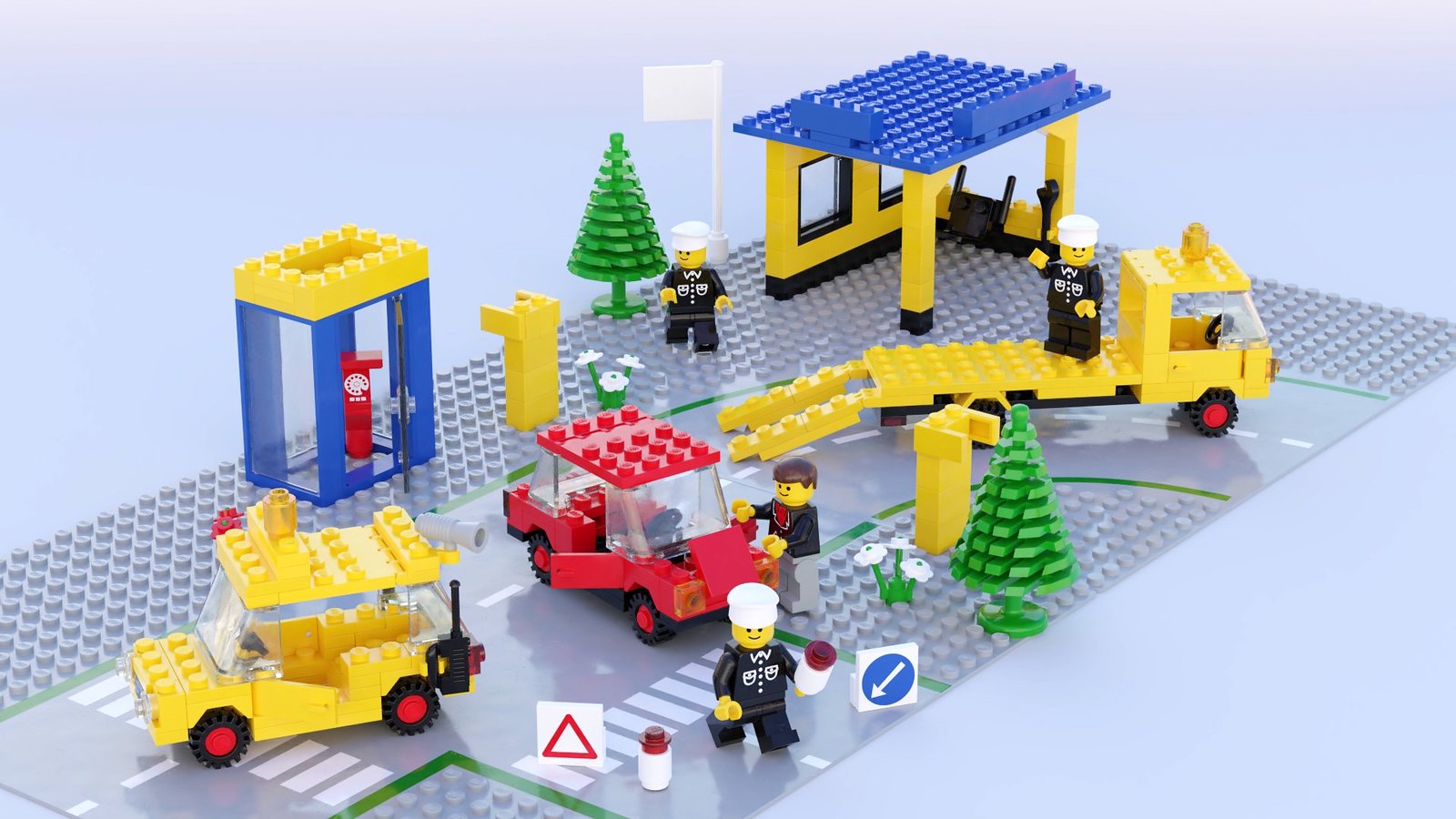 Scrubs was nice enough to provide me the base plate, so I built a correct version of the 609 plate. I’ll work to update this image again with the new plate, along with the missing stickers, in the new year.

1607 Helicopter—adding motion.
I new going in that I was missing pieces to complete 1607, a simple helicopter from 1987. I created a few faux pieces using Mecabricks. As my Blender modeling skills get better, I’ll try to add in the real ones. But, the results are pretty close. 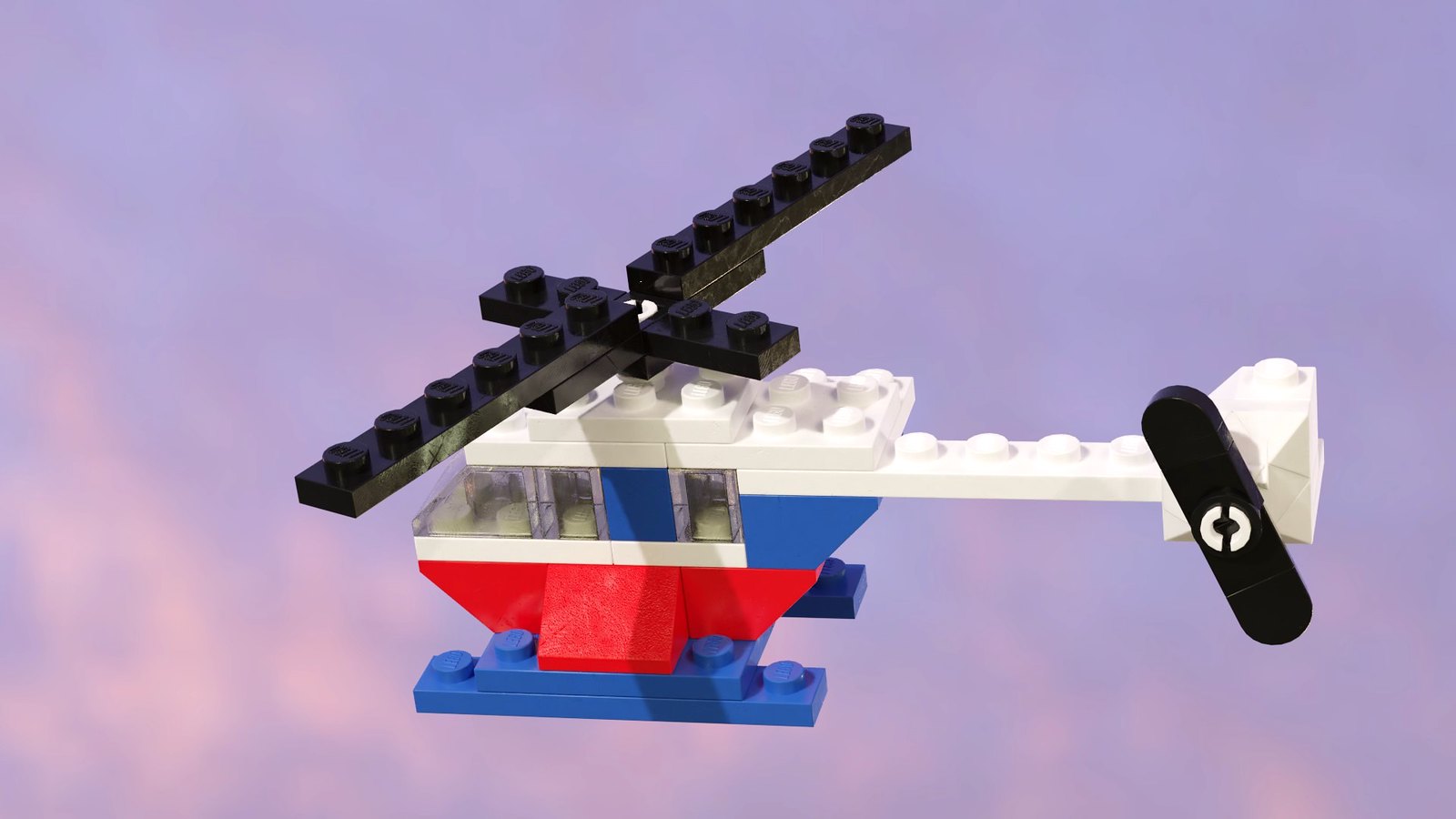 Yet, to hide the faults of the parts, I learned how to add motion blur to the model. Following a great tutorial on Mecabricks, I moved the two propellors enough to make the model pop. The result is this flying version of the helicoptor. 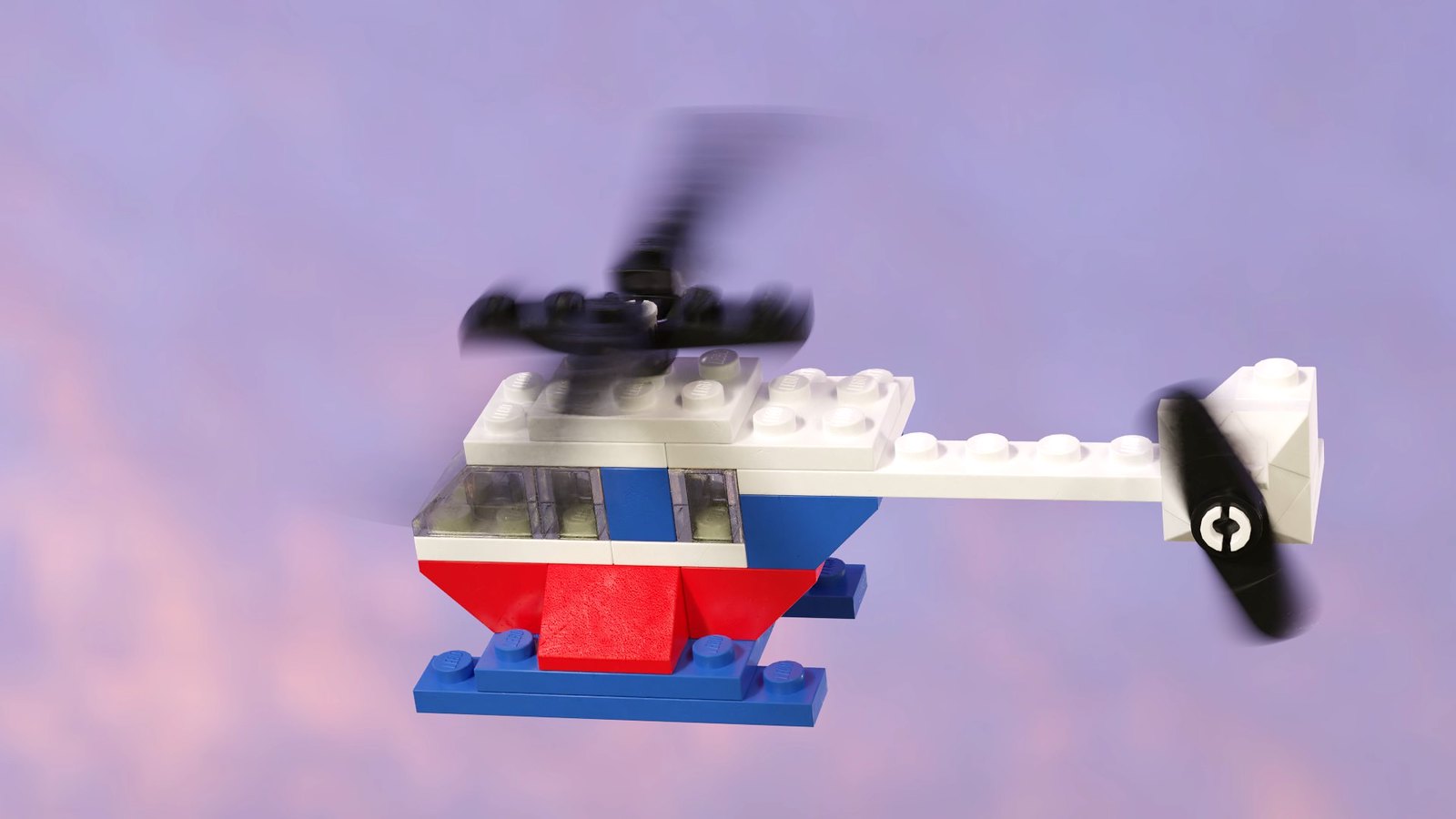 1610 Police Car—fun with backgrounds.
This model from 1991 inspired me. It was a nice build and I liked that it was already in Mecabricks. Adding a twist, I tried to match the look of the box art. The road I drew was off a bit, causing me to adjust the angle a bit more than I wanted. But, the city looks nice, especially with the added focal blur. I added the Police sticker to complete the model. 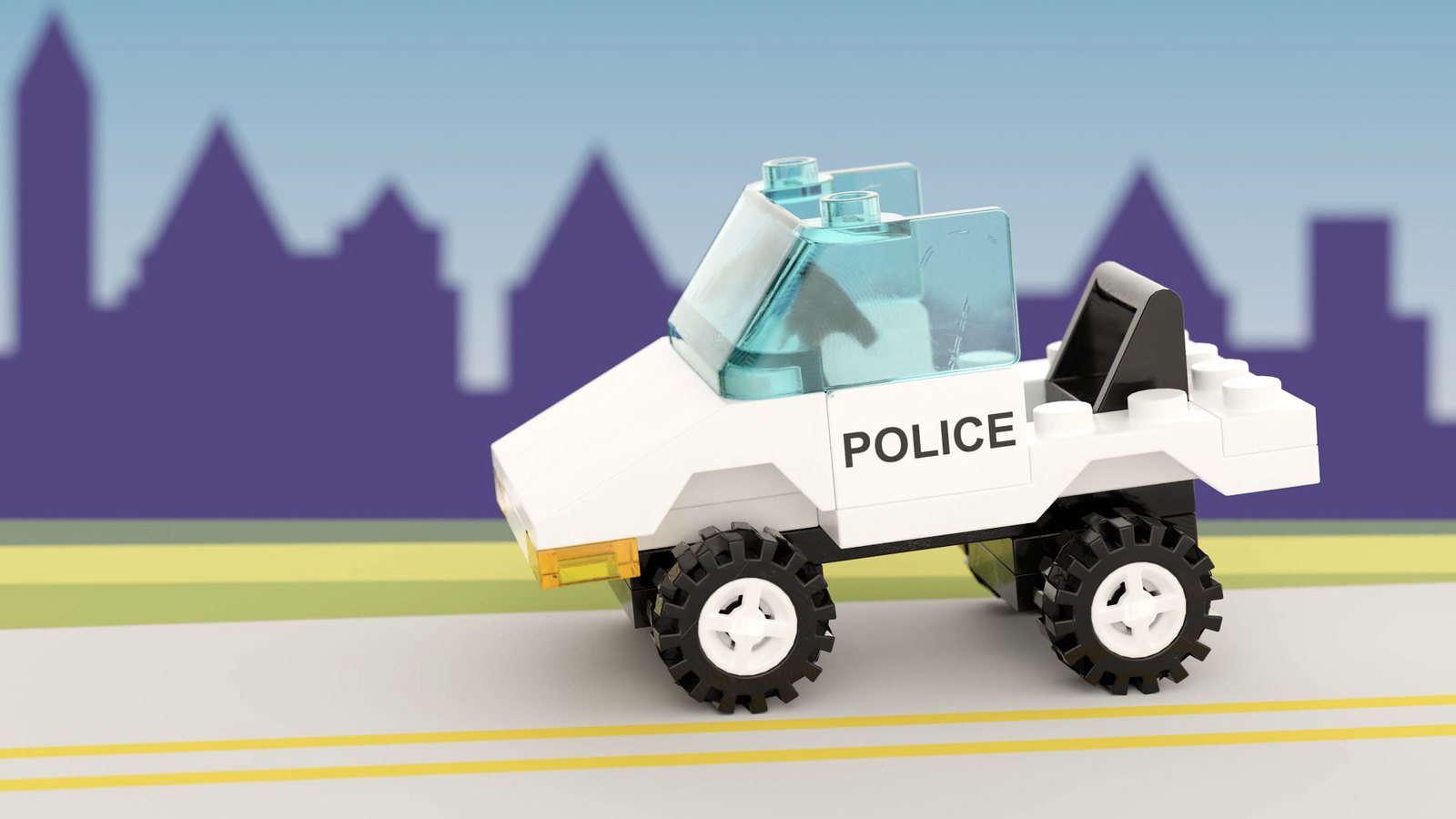 699 Photo Safari—now with stickers.
Having rendered this twice before. Last December with a faked mini figure, then in April of year with the my newly modeled pieces, it wasn’t finished—until now. This time, I got around to adding in the last few stickers. I couldn’t find a photo of the original sticker sheet, so I based them on the box instead. I tried to get the font as close as I could. The final render is quite nice. 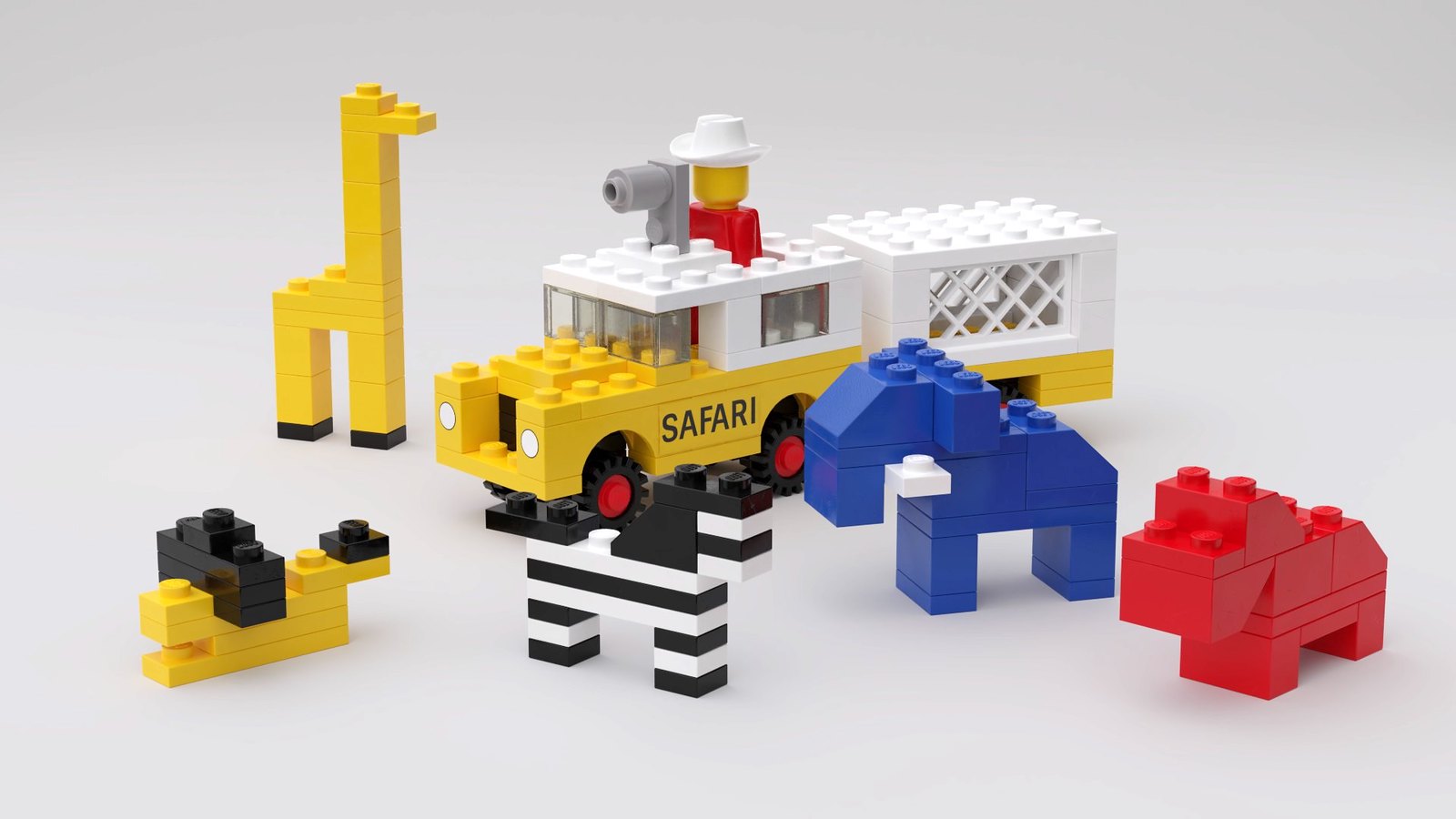 699 Photo Safari with Stickers by Steven Reid, on Flickr

Articulated Bus by František Hajdekr
I ran across František’s great builds on Flickr, which led me to his YouTube instructional videos. After a short watch, I decided to try my hand at building his Articulated Bus using Mecabricks and rendering it with Blender. I had to swap out the smooth tire for a knobby one, but it otherwise true to his build. 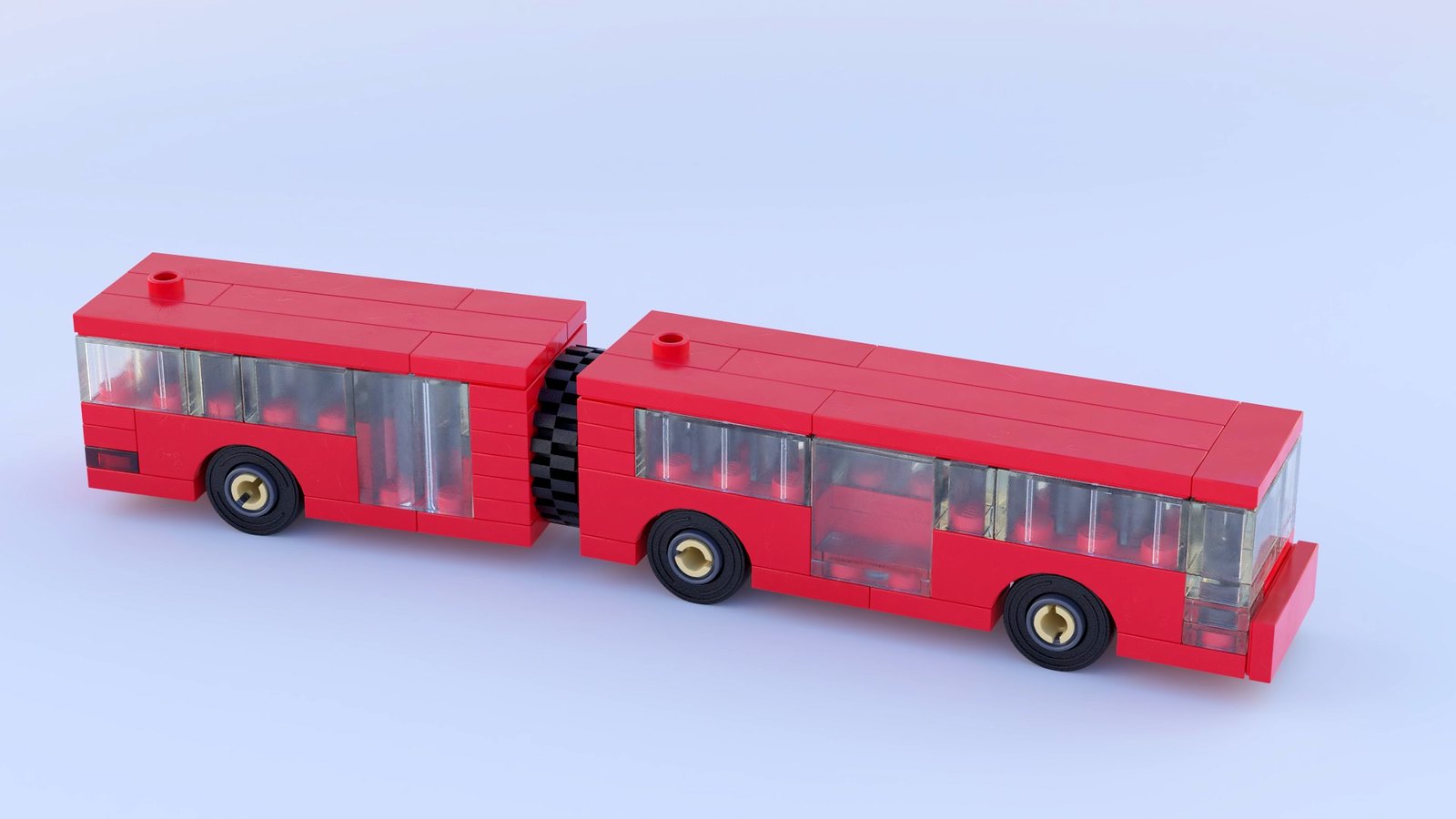 Articulated Bus by František Hajdekr by Steven Reid, on Flickr

Go check out his videos. They are fun to watch, and I like how he runs them backwards—a nice effect that stands out against others.

600 Police Car—a few new stickers.
Although I updated the alternate version of this set in May, it wasn’t a complete recreation of the original set. I’d substituted stickers with other parts and the base plate wasn’t quite right.

So, I spent an evening tracing the old sticker sheet. This included both the mini figure’s police vest and car sticker. I substituted in the correct base plate, matching the original POV-Ray render. Throwing together a gradient background, the final image looks almost as good as the real thing. 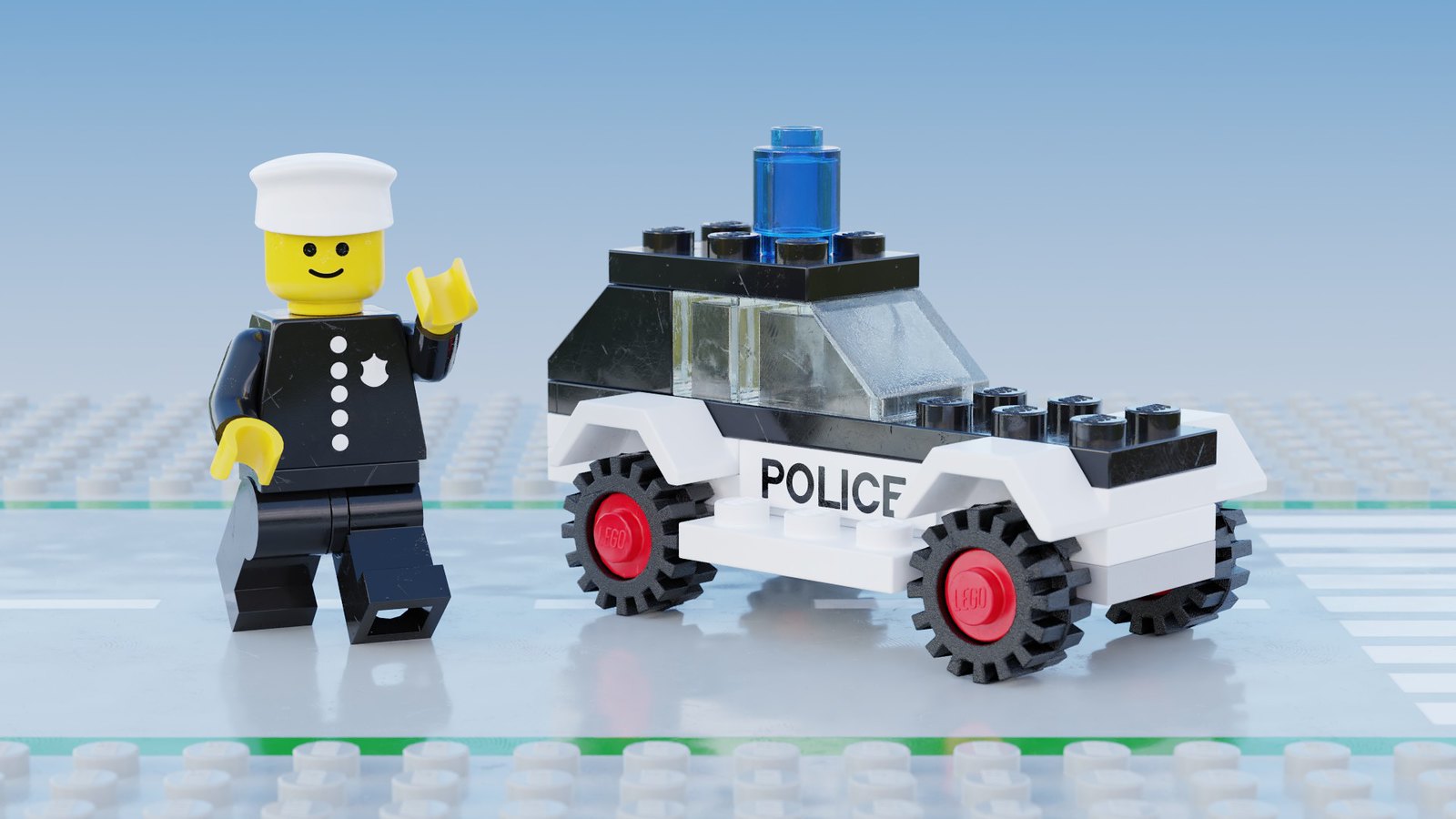 6364 Paramedic Unit—remade for 2017.
I’ve been wanting to render 6364 again for awhile now. Rendered first in POV-Ray, I later updated and fixed a few things when I rendered it on my Mac. Although I’m proud of the original image, I wanted to update it in Blender. Plus, it gave me a chance to update the stickers to match the model. 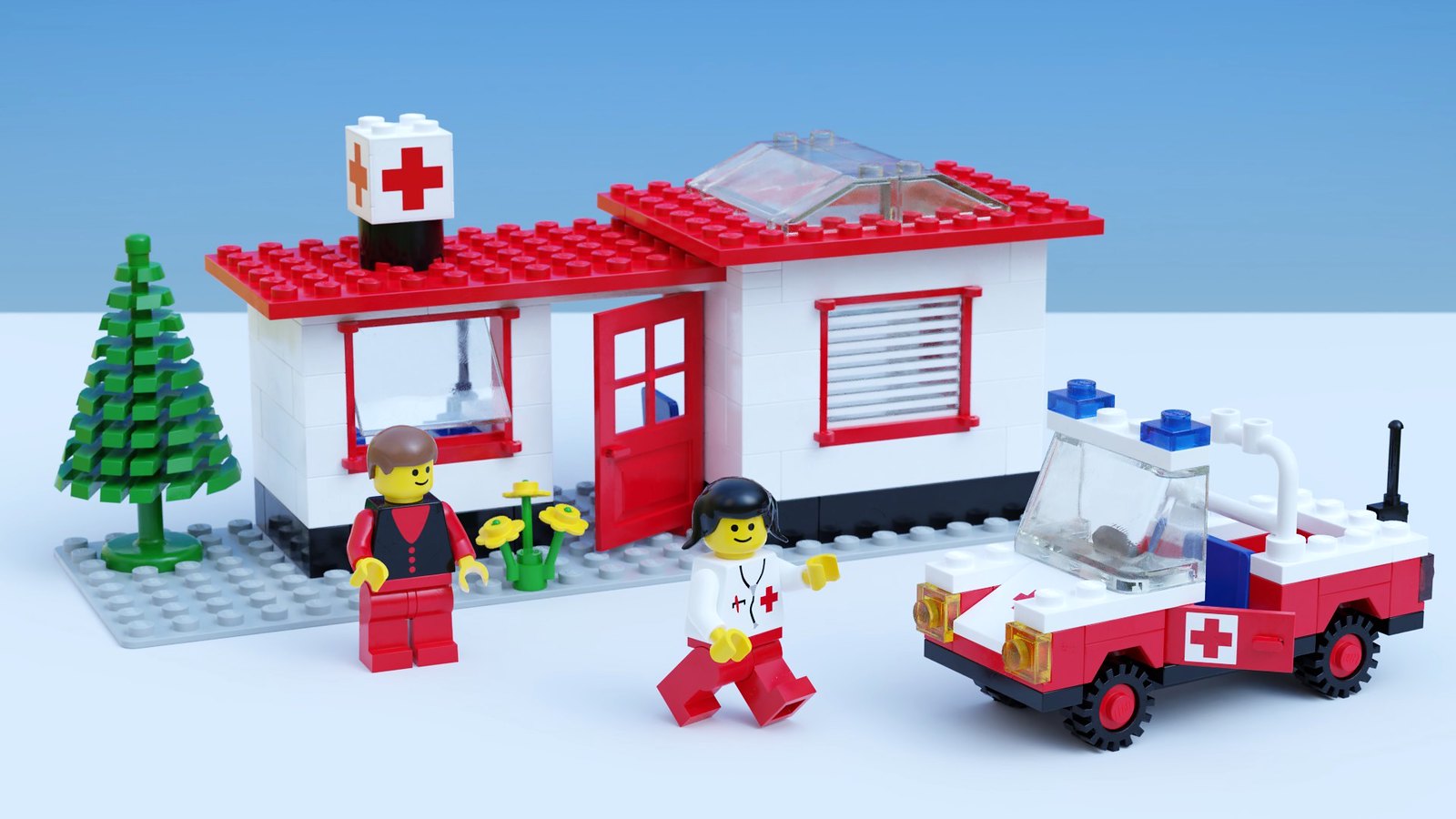 Getting carried away, I ended up tracing the remaining stickers on the sheet that I hadn’t bothered with before. Those included the generic eye chart and medical file. Completed, I took the opportunity to render the inside of the Unit to show them off. 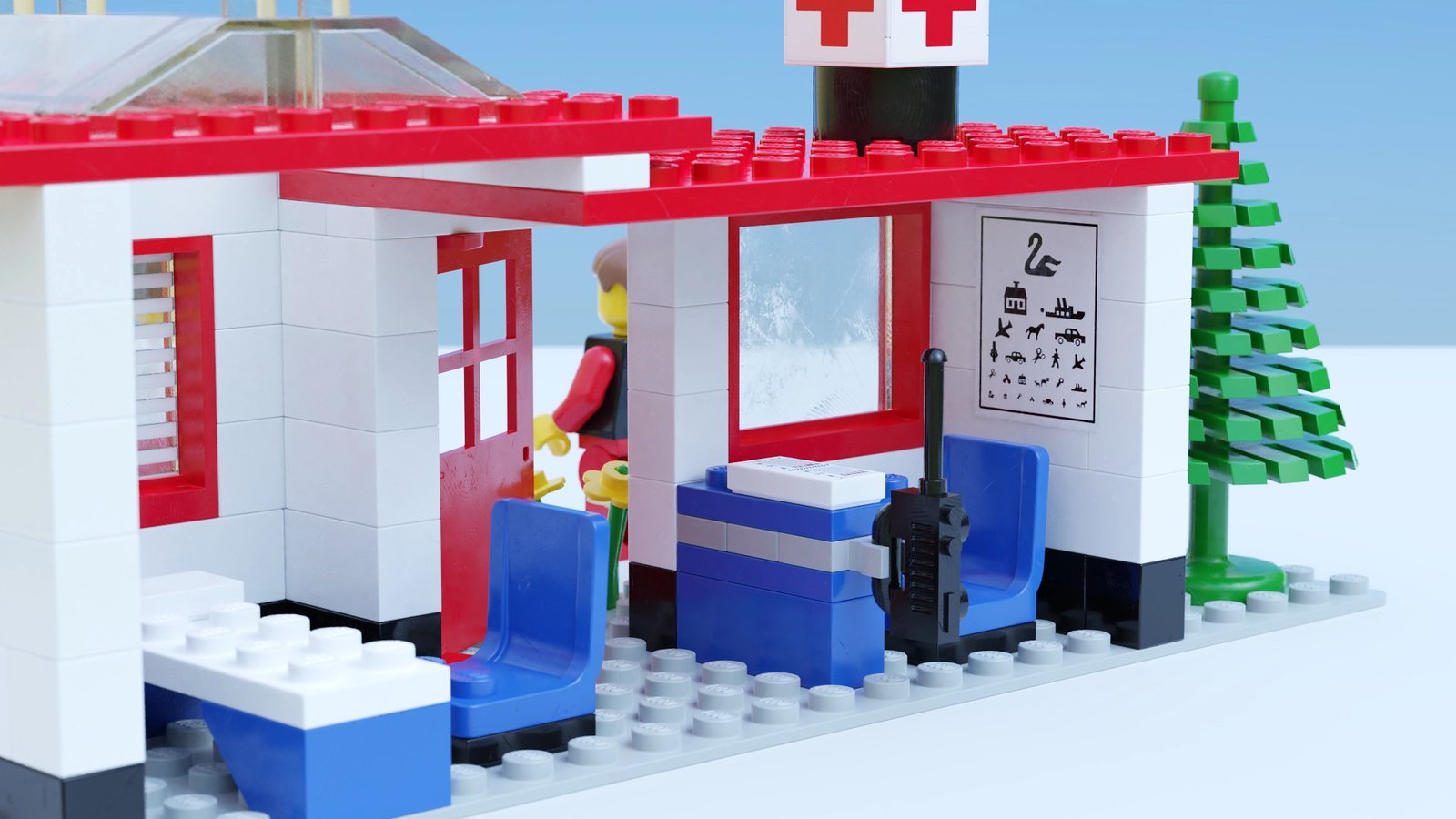 You may be noticing a theme with my December renders: many had stickers and new parts. I plan to revisit a few of these, walking you through my workflow in case you want to try this yourself.