I spent part of the memorial weekend getting Blender working on my office computer, a 2011 Mac mini. Although not as fast as my laptop, I’d set up dual monitors a few months ago and was itching to use them. The result of my effort is this render of 6600 Police Patrol. 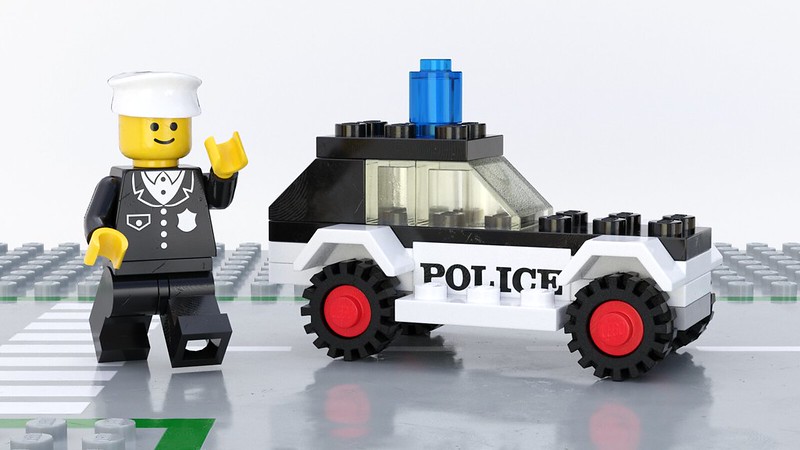 Getting things going.
The dual monitors were only part of the excuse. I wanted to get Mecabricks working as well. That required me setting up all the folders, grabbing all the scripts and some new light probes. But first, I needed Blender.

My first thought was to try out some of the beta and nightly builds. No luck. Ran into either material or script issues. Giving up on that, I reverted to the latest build that I knew worked. I soon had Blender 2.78c running like a champ.

But, before I could do anything I need something to render. I had some old images from my site up and thought it would be fun to redo some of them. I’d done some nice renders in POV-Ray with some old cars on a road plate. Inspiration hit to recreate that look in Mecabricks. Plus, Scrubs had recently updated the old style wheels to fix the logo issue. Opportunity!

But, I ran into a minor problem. WebGL stopped working in Chrome. After some digging around, I learned that Google considers my old graphic card buggy and blacklisted it. More searching and I found how to enable it to get back into the action.

Building the scene.
Using ryczkowski_adam’s model as source material, I played around until I got the look I wanted. I had to use an alternate uniform and sticker, but otherwise matches my reference render.

The render itself came out very well. Yet, this is the third attempt. The first one had floating parts. Oops. Back to Mecabricks to fix and download the model again.

The next render was better, but the fingerprints were too obvious. Also, the the mesh edges were a bit too obvious requiring some subdivision tweaking. It took a bit longer than expect. Fingerprints weren’t a global option, so I had to tweak each color. And, since not all parts like subdivision, I manual updated each part I wanted to change.

And so, the final render is what you're left with. As always, I see things I could improve on. But, its good enough and I want to move on to other ideas. I see fish in my future.