Although I've been busy working with the ZX81 this month, it has been with my Gem Quest game. Not much to share yet there, but I am working on it. To get in something for the month, I thought I’d share an updated demo program.

I was going through my old programs and found this one circa 1998. It was a really simple SCROLL demo that created a nice SIN wave. Here is the original listing: 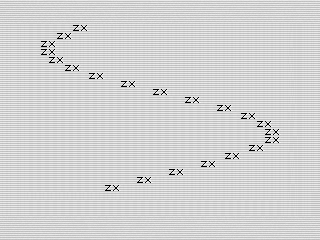 Nothing too exciting, but I needed to tweak the code a bit.

Since the first thing I needed to do was make it auto-run, that was where I started. But in doing so, I realized that the original code had a finite ending. The FOR loop is finite and would run into the SAVE routine. So, I got to work fixing that.

This led to a couple of iterations of the program. The first was simply to add a CLS line and a RUN line to the code. That worked, but was jarring when the NEXT got to the end.

For the next version, I dropped the FOR loop altogether. This version would just increment X forever by .3. That worked as well, but at some point the floating point math would run out of digits. It would take awhile, but I decided that wasn’t the best solution.

The final version put the FOR loop back in, but ends after one wave. I forced a SCROLL each loop, removing the IF statement. I then added a RUN back in to make it an infinite loop. 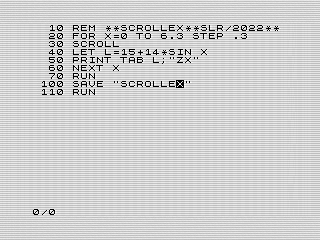 The resulting code isn’t much different, but with the stated goal of making it run forever. As a bonus, the 6.3 from the original worked perfect in this version. I hadn’t expected that, but it worked perfectly.