Shifting from POV-Ray back to Blender, I'm playing around with Mecabricks again. Taking a break from blogging about images, I decided to shift my focus. During the last week of April, I decided to clean up models and make new decorations. The journey weaved a bit, starting with an old model, but ending with something new. Below are the results of that virtual trip.

Checking my feeds, I was intrigued by Brickset’s Featured set of the day: Car with camper. It was a interesting little set and looked like a fun build. With that thought in mind, I wandered over to Mecabricks.

Searching the site, I discovered it was already built which made it less interesting. There is fun in adding to the catalog, but that’s okay. It still looked interesting to render, but I got distracted. I happened to see a couple of other sets, including one of my older ones, 6349 Holiday Villa.

Built a few years ago, this set took me on quite a trip. A larger set, I took the opportunity to create all the missing stickers for it. The road plate took the longest, but completes the build. It was a learning experience, especially the minifigures. 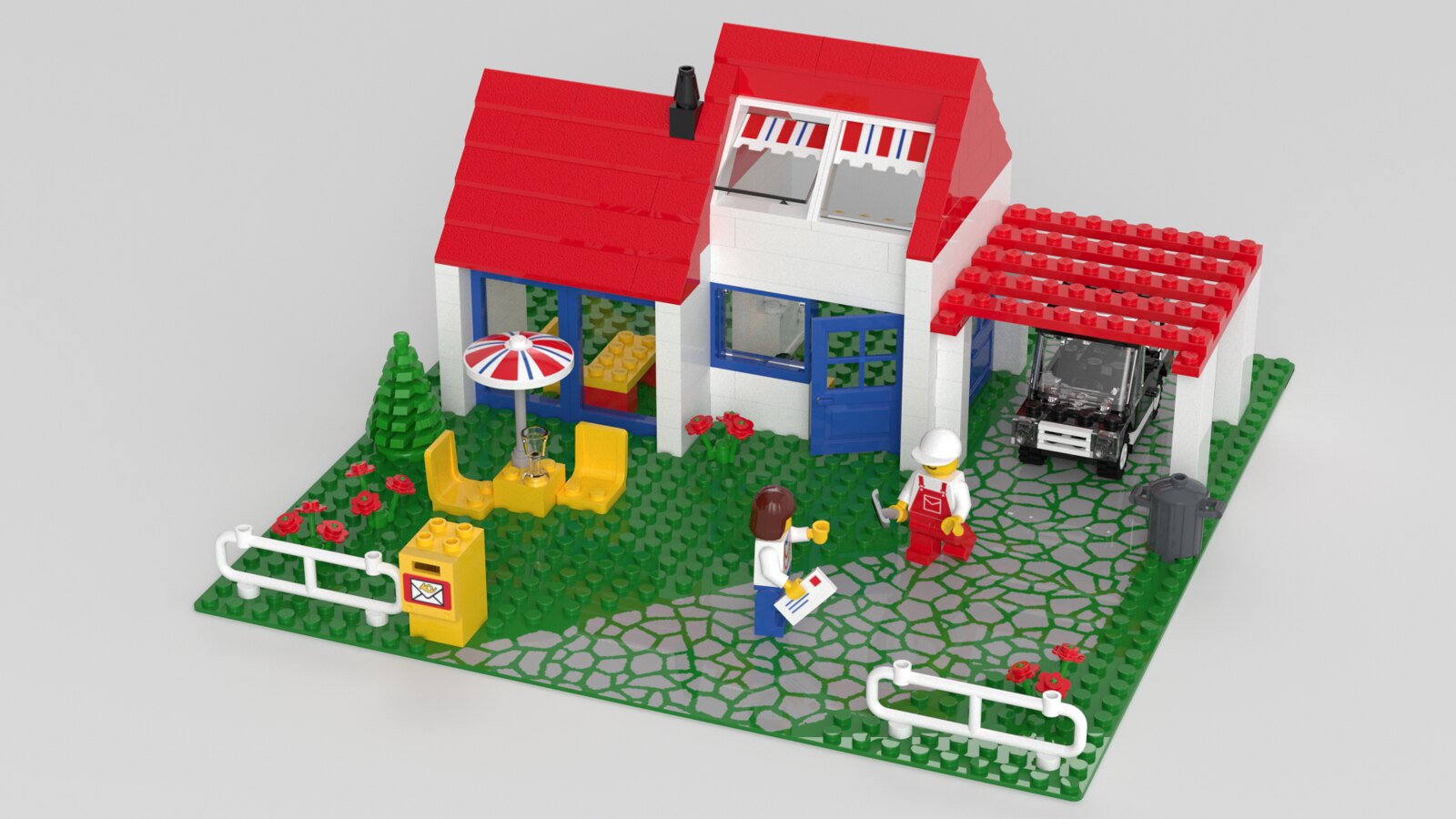 Once done, I had submitted the decorations to get them added into Mecabricks. After fixing some errors, they were included in the library. I promptly updated the model in Mecabricks to complete the set.

During that same search, I also saw 6374 Holiday Home. It was like the Villa and used one of my decorations, the umbrella. But it was missing a couple other stickers as well the decorated road plate. Even with all the parts, for some reason it looked unfinished to me. Distracted, I thought it would be fun to finish it.

After adding in some of the missing elements, I realized that the girl’s shirt was a substituted part. As it was supposed to be a simple striped design, I decided I’d update it. In doing so, I realized that the minfig was also used in the Camper that had started this journey!

In the middle of this journey, I was asked to check out Lilbirdie16’s MTA Bus on Mecabricks. The design is nice and I realized it would make a nice image. This is actual the second as I didn’t realize the bus’ wheels were below the ground plane. Oops. It was a quick fix. It is well designed scene, I didn’t have to change anything. I like the potential passenger waving at the bus. 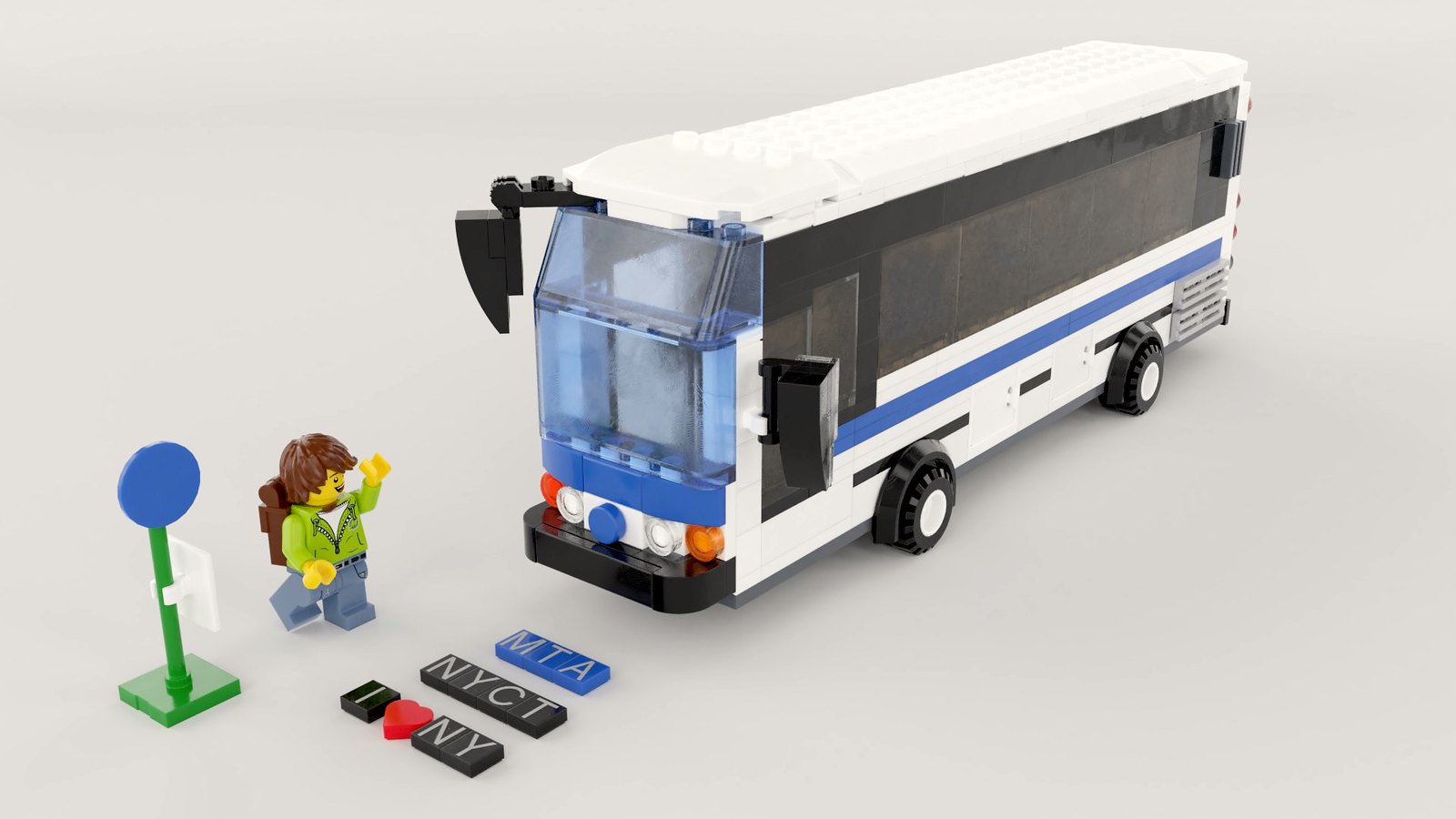 Returning to the original path, I got to work on the Holiday Home decorations. After completing the shirt design, I added in the missing numbered slope, which was a bit of a pain. The curves in the seven required some patience.

Making a more adjustments, I exported the model for rendering. Not leaving well enough along, I decided to swap out the tree for the taller fern. It wasn’t the only part needed. I was also missing the door and awning decorations, but I decided they didn’t add enough to make a difference. 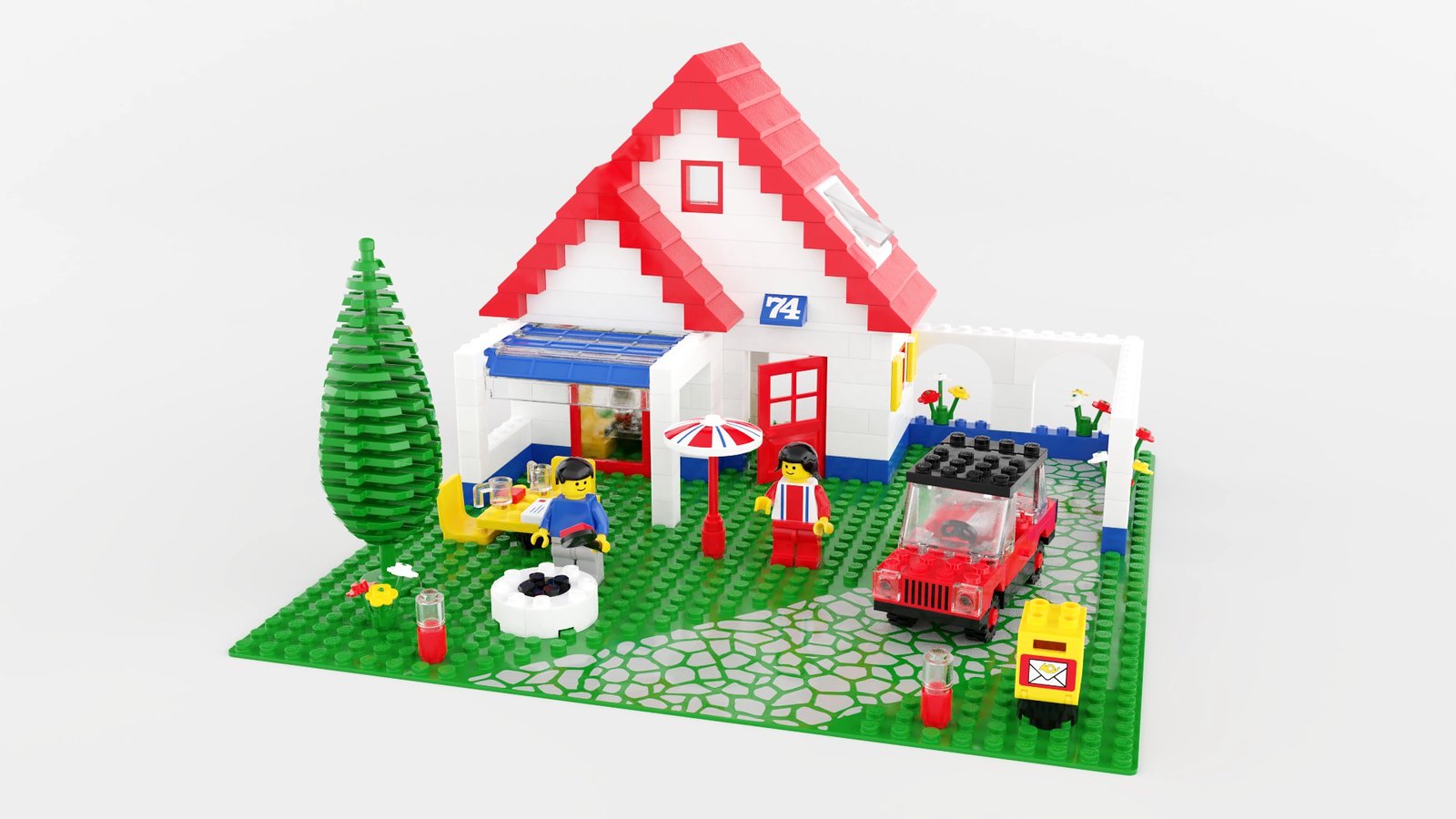 Since I had recently upgraded my Mac Mini, I thought I’d render this one on it. While it was rendering, I got back to that camper set. I added in the new shirt sticker and adjusted the scene. After exporting the model, I got distracted again.

Finishing the Holiday House, I wondered about other models missing decorations. Due to missing parts, I never felt 353 was complete. The Mecabricks model had been updated some time ago when various window parts were added. But, the render was still wrong. The incorrect numbers I used always bugged me.

More comfortable using Mecabricks part system, I decided to correct the number decorations. After exporting the model, I swapped in a few other missing parts from LDraw: gates, baseplate, cellar windows, and arial antenna, and the doors. The Mecabricks model used “faked” parts for most of those, I wanted a more complete version for the render. 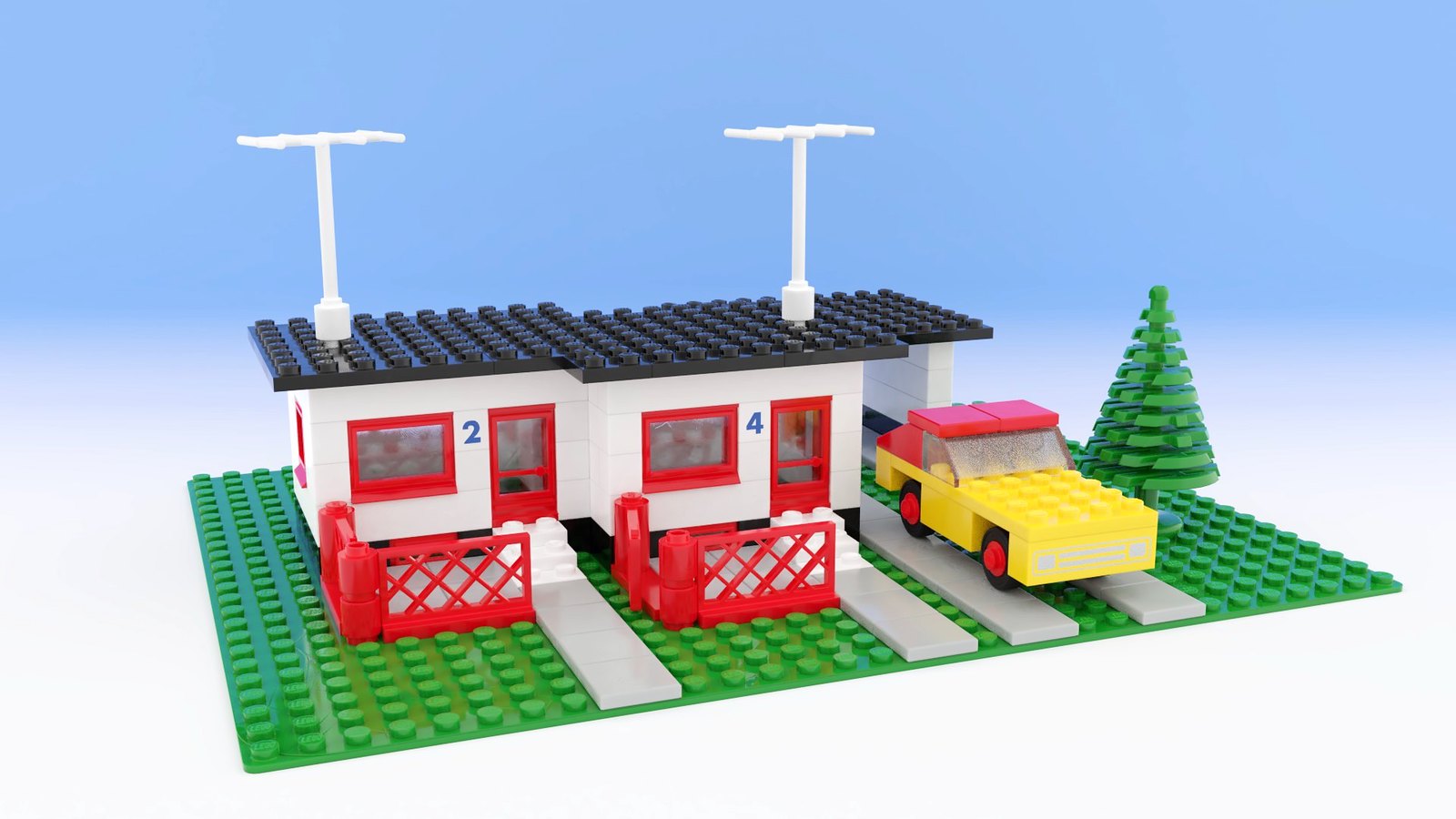 353 Terrace House with Car and Garage - Blender/Updated by Steven Reid, on Flickr

You’ll notice that I went back to an older backdrop that used a blue sky. Not looking as smooth as I’d like, I cleaned up the gradient to improve the look. I contemplated using the original scene, but decided against it. The blue backdrop completed the set better.

The fern tree is the only part that is wrong. It should be the LEGO fruit tree, which I couldn’t find a model of. In my POV-Ray version, I used a round tree, which is closer to the original. After rendering Holiday House again, though, I think the taller fern would look better.

Caught up in shirt design, I kept wondering about other models that used it. More houses came up in my searches, leading me to LEGO set 6372. The set was released in 1992, the year I graduated from college and married my lovely wife. How could I not complete it?

Town House had almost all the correct parts to start. It was nice to see that 6372 was another set that used my umbrella and farmer decorations, both I traced for 6349. Adding in the girl’s shirt pattern completed the look of the model. The stove pattern is wrong, but you can’t see it in the render. There should also be some awning stickers over the big window, but I couldn’t find the pattern to trace. 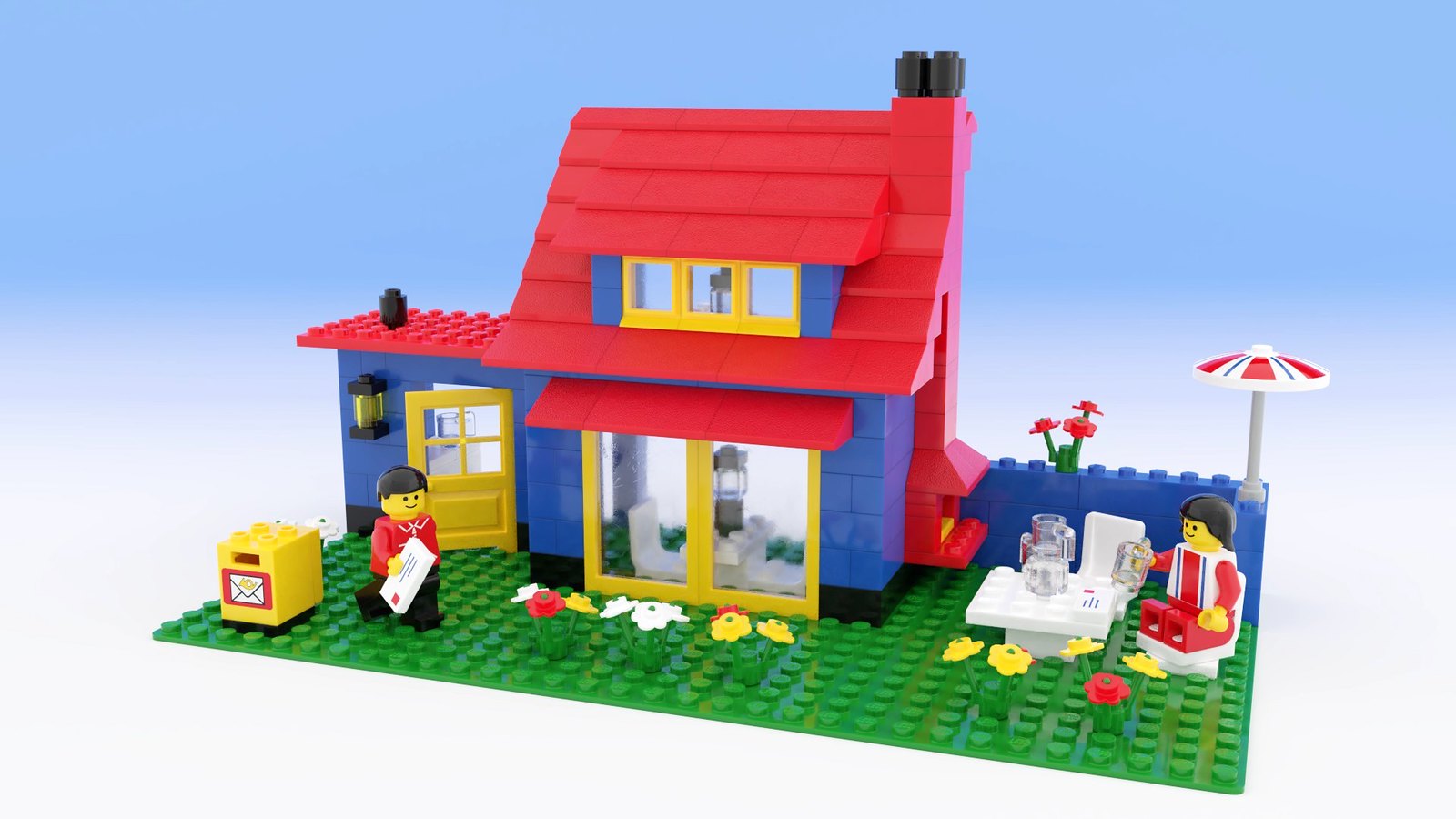 Going back to old renders.

After completing, I started pondering completing another one of my sets. LEGO set 6410 Cabana Beach was missing a bunch of decorations. I’d always planned to finish them, but other interests interviened. After looking up the set again, I pulled up the parts list to find the missing decorations. I spent some time finding quality images to trace. That was when the boom box caught my eye, causing me to start with it.

Thinking the simple shapes would be easy to trace, I soon learned otherwise. The speaker grill was made up of checker board patter of black and white squares. Figuring out the size of the each square required trial and error. I got code enough, bother were difficult to get right.

The two tape players and buttons were much easier. In then end, it took much longer than I thought it would to complete the radio. Yet, once finished, it looked great. I uploaded it to Mecabricks and added it to my Cabana model. And then I got distracted again.

Like the earlier shirt, I started searching for other models that used the boom box. This led me to Outback Airstrip as my next model to build. It is a pretty interesting model, and I discovered it wasn’t already in Mecabricks. Double fun! Even better, most of the parts existed in Mecabricks, making it an easy build. I added in my new tape player, but there are a good number of decorations missing. 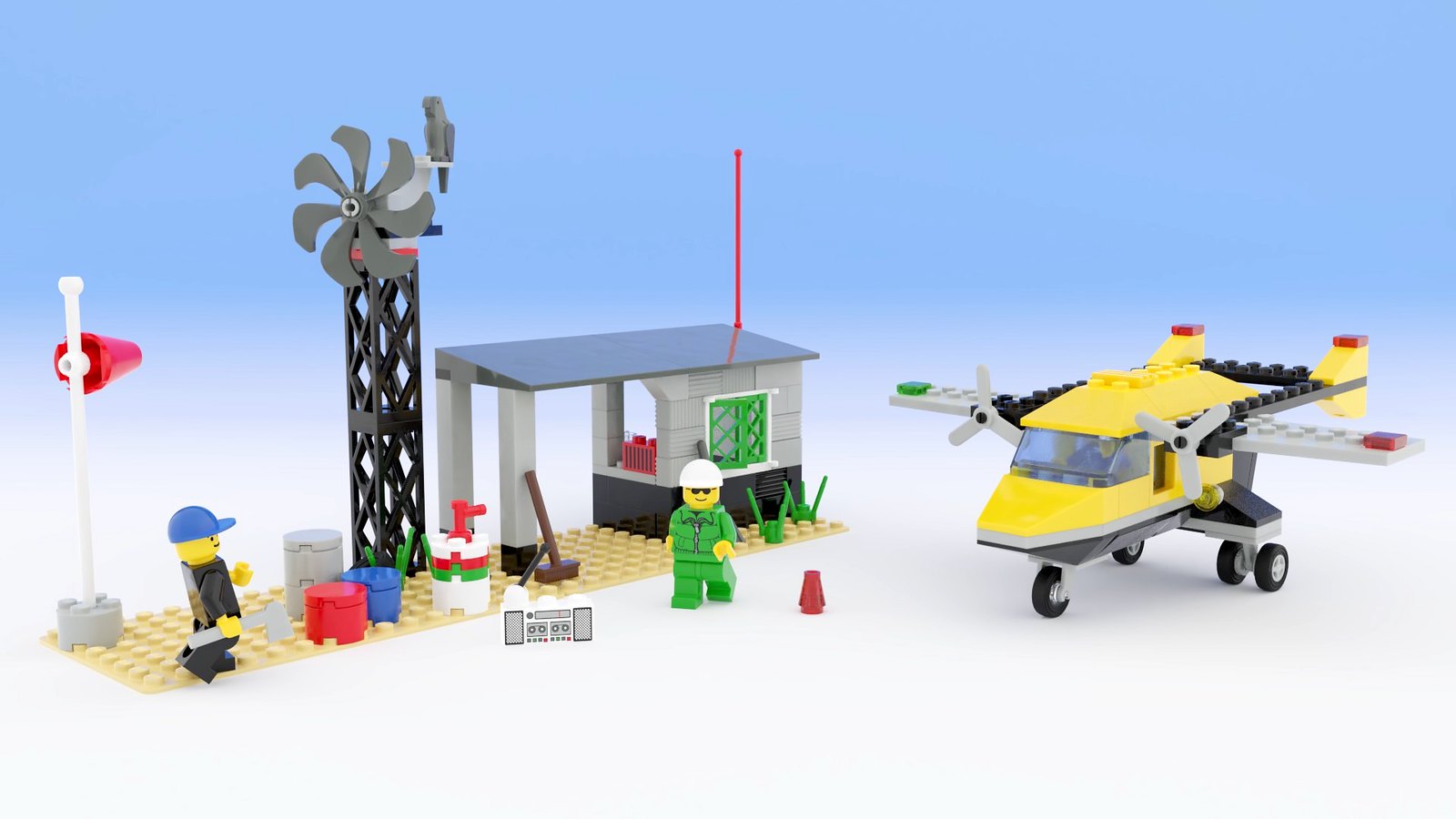 Although I'm still working the other decorations, I wanted to get a draft render done. I decided to use the blue backdrop, but after rendering I felt the ground was too white. I’ve already corrected that, but I’ll finish the other prints first before rendering again. I’m making good progress, having already modeled one of the shirts.

Which brings us to the end of journey, which is back to where I started. The last model I shared was actually rendered a couple of days earlier. Finished around the same time as the Town House, my new shirt print completed the model.

There are quite a number of other parts still missing. But, I did swap out the window on the camper for the correct train window part. As you can tell, I’m enjoying using the LDraw importer, probably more than I should. 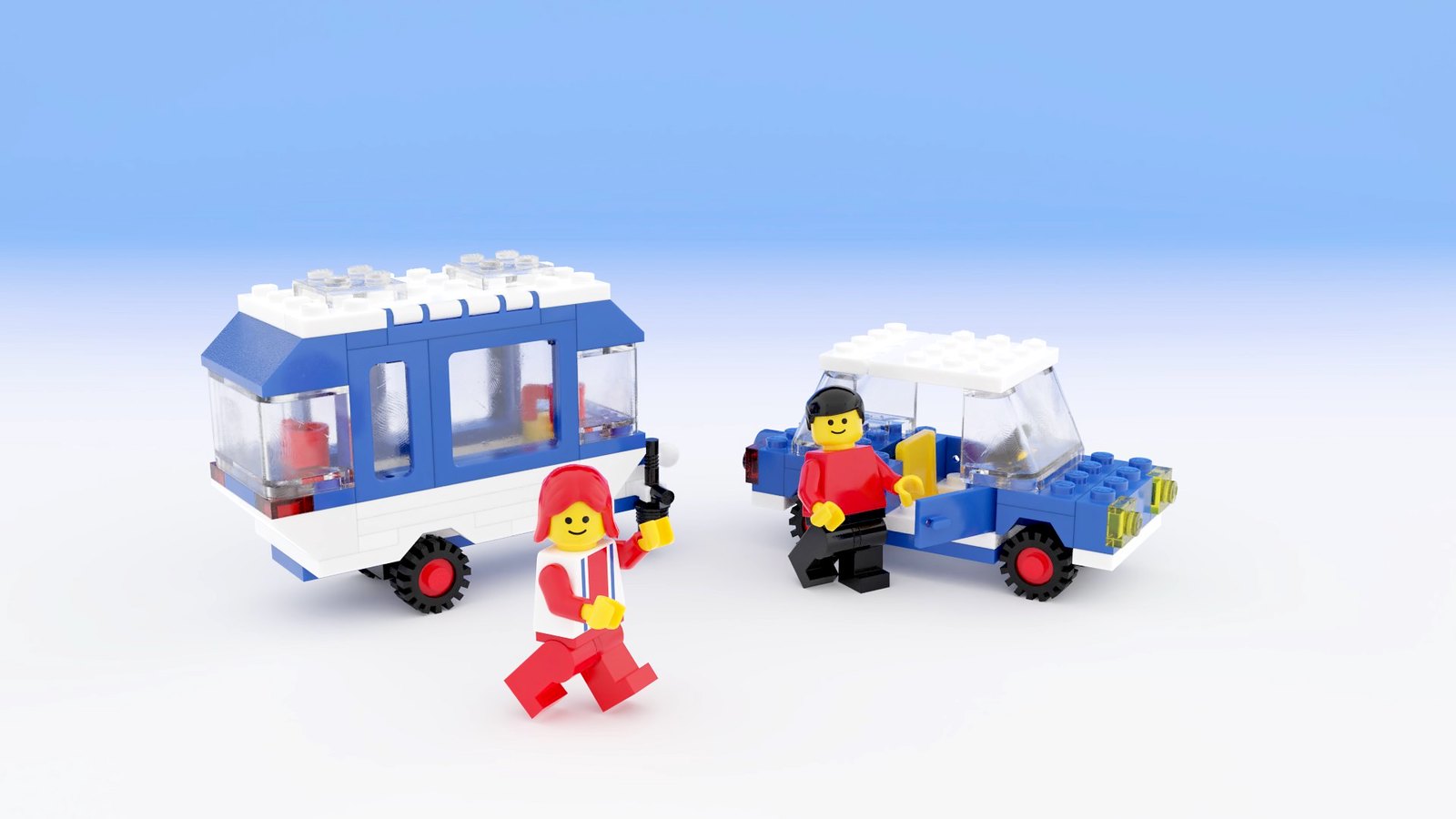 And with this render, I can close out April. I took a couple days off due to work, but am starting to get back to my hobby. I’ve modeled a little lizard I found, but am still building his enclosure. I also want to get back to those missing decorations. Here’s to May and finally getting out of the house!