I can’t believe how many LEGO sets I built and rendered using POV-Ray. Over the years, starting in 1996, I’ve built 125 different models—yes I counted them. To note, that doesn’t include the variations or alternate scenes within each set. Around the same time, I started to share my models online. To my surprise, many of my models were never shared! It’s time for me to fix that!

A history of sharing.
Almost from the start, I shared my images. First using my ISP when I was in Texas, and then later on GeoCities when I moved. When Yahoo! bought GeoCities, and crippled the platform, I stopped sharing. Although still building, it wasn’t until I purchased this domain that I started to share again. Even then I was using platforms like DivantArt and Flickr to share my creations. I tried to blog when I could, but it was sporadic. Many of my images remained tucked away.

Around 2009, I was blogging more and sharing my recent renders. Flickr helped, providing me a community of encouragement. But, when I purchased my MacBook Pro in late 2013, my LEGO blogging fell to the wayside. I was busy with work and other hobbies. Things started to improve in 2016 when I got POV-Ray working again. Shortly afterwards, I found Mecabricks and my LEGO rendering and blogging took off. But my back catalog was starting to look dated.

A problem of size.
Before Mecabricks, most of my renders were small in size. The reasons were complex and varied. Screen sizes were much smaller in 1997. The Internet, surfed using a modem, favored thumbnails and smaller images. Even as screen sizes and bandwidth increased, I continued to use the smaller format. A good number of my POV-Ray images on Flickr are 640x480, a pitiful size.

Although I did experiment with larger sizes, compute power often limited me. Raytracing is compute intensive, and POV-Ray isn’t very speedy. Smaller images rendered faster, but it could still take hours if not days to finish. Lacking a powerful computer, size was an easier way to render and share.

One more reason for the small size was network bandwidth constraints. Geocities had limited download limits to force upgrades. Given that pictures consumed most of that cap, I got in the habit of using small images to avoid throttling. Even after moving my pictures to Flickr, where the cap was larger, I continued to share small images.

A change for the better.
After I purchased my MacBook Pro, I started to dabble with larger image sizes again. Using a mind blowing resolution of 2560x1600, I started to render LEGO’s again on my Mac. But right after sharing that image, I found Mecabricks and things changed for me. I will admit, for the better.

For starters, its Blender script used 1920x1080 HD sized images by default. Plus, they were faster to render, taking less than a couple of hours to render. The renders looked great on TV screens and widescreen monitors. Uploaded to Flickr, they looked as good—if not better than—my larger POV-Ray images. In either case, my older, smaller POV-Ray renders looked dated next to both. For now, I had a new bar for sharing.

To that end, I’m going through my old POV-Ray collection with two goals. The first, is to share all the images in my collection that I haven’t. The second, is to render each in HD format to match my Blender renders. It may take awhile, but it should be a fun project. It’s been forever since I played with POV-Ray and this is the excuse I needed to try a few things out. 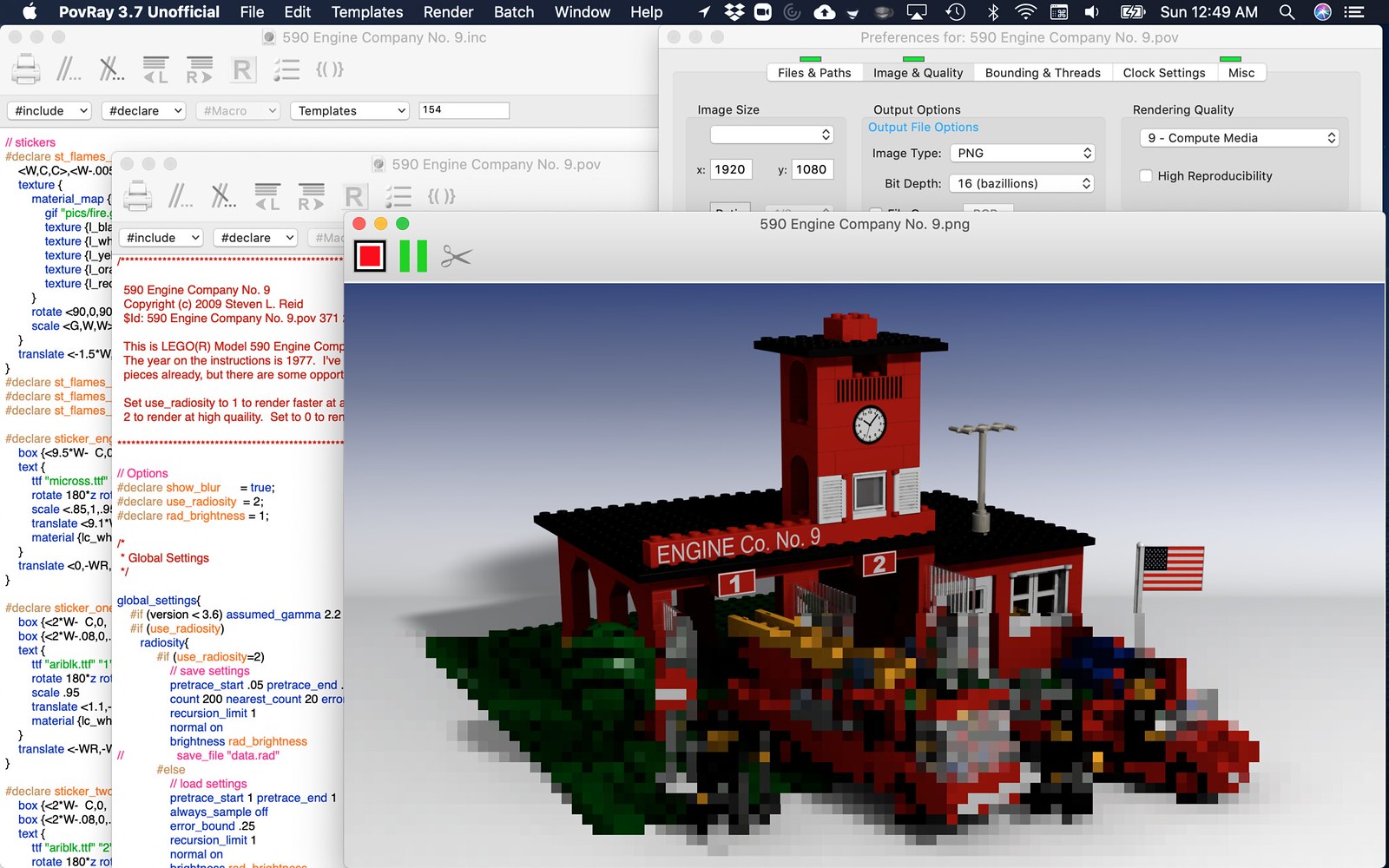 Time to start updating old renders.
The first render I’m updating will be 590 Engine Company No. 9. To my surprise, I hadn’t shared the render, even though I’d modeled it back in 2009. Brickset featured it recently, making a great excuse to share it now. It is rendering as I write this, and I have a new blog post ready once it finishes. An experiment of sorts, I’m working out the bugs in my process to better understand the challenges.

And challenges there will be. For one, I had created the earliest scripts for an older version of POV-Ray. Although I had updated some, others will be difficult to reproduce. This is especially true for my original images that also used an old library. That’s not a show stopper, but I will need to decide how best to update them.

The bigger problem will be images that I don’t have the files for anymore. For a while I was using an Suversion server to track changes. As I made changes, I often edited the main file and uploaded the differences. All good, except that I lost my Suversion server a few years back and lost my changes. As fortune would have it, I tried to keep the old positions in the newer versions. Yet as hopeful as I am, I don’t expect I’ll be able to recover everything.

Opportunity to try new things.
As I start to go through my collection, besides rendering them again, I can update them as well. There is some pretty bad lighting in some of the scripts. POV-Ray supports HDRI sky-spheres and I want to see if I can get my renders to look closer to Blender. If things work well, I can remove some of the tricks I’ve needed to improve the quality of the images.

With the latest beta versions of POV-Ray 3.8 are out, it is a great time to get back into rendering. I’m not expecting a ton of changes, but I would like to see if it renders faster or provides improved image quality.

Besides tool changes, I continue to tweak the colors in my library. I had been updating the colors over the years. This is a good time to tweak my materials a bit. That said, I do want to be careful. The older stickers may not look right with different colors. Something I will need to test as I work through each image.

And with that, I’m off to catalog my images. I’m excited to make my old hobby new again. I’m not giving up on Mecabricks as I want to continue expanding my modeling and Blender skills. Plus, it will take time to get through all my images. I’m up to the challenge. Let’s see how this goes.