I’d taken a bit of hiatus from my LEGO rendering in the later half of last year. Life sometimes kick you in the teeth and some pleasures fall to the way side. Rendering was one of them. To my benefit, other interests flourished. But my heart was still yearning. Trying to kick off the new decade, I grabbed a model of the latest LEGO mini-build and set to work.

The final render first.
Doing things in reverse, let’s first review the outcome of my efforts. This is the 3rd version of the render and the one closest to my vision. My goal was to illicit excitement and interest in the small LEGO design. It worked for my wife. 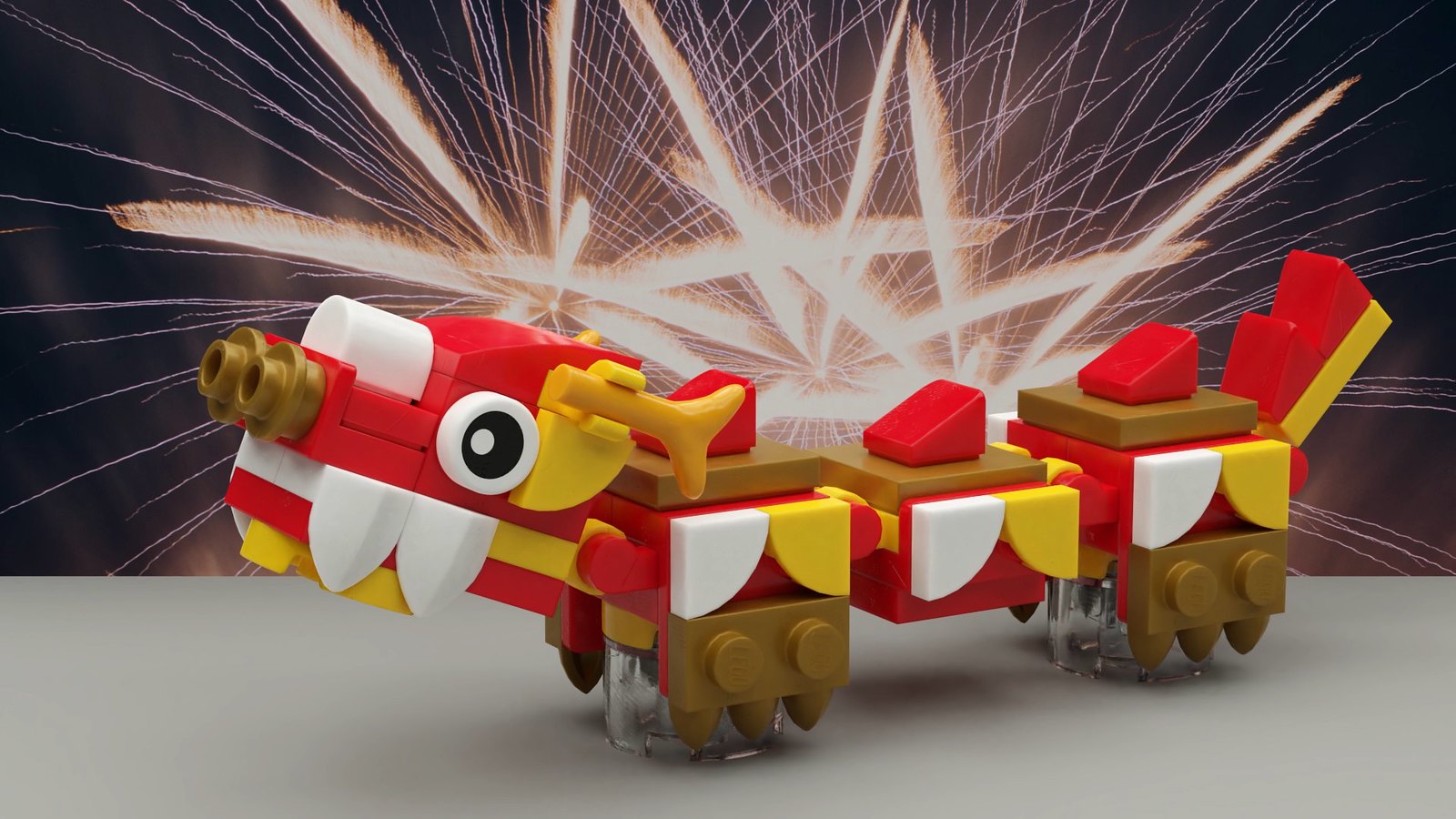 In my mind, I thought of fireworks and confetti to convey the celebration of the Lunar New Year or Chinese New Year. In some listings, 40395 is called the Lunar New Year Dragon. For some reason, that my first attempt didn’t match that vision.

Attempt number one and rusty workflow.
Having been awhile since my last render, I opened up Blender with some trepidation. I wasn’t even going to do a one—when I went to the LEGO mini-build site they had the model from last year up. Returning to the site, not sure why, I was greeted with a nice dragon model. With a bit of excitement, I hopped over to Mecabricks and found a few folks had already built it. With one less step to do, I quickly grabbed a copy and made some position changes for my render. Finished with step one, I still was worried.

Back in Blender, I loaded the default template and imported my exported dragon. Things were looking good as I remembered how to move and position things. For some reason, though, I decided to look for a new HDRI background. I landed on a nice theater image, even if it wasn’t what I was looking for. Loaded it into Blender, I made my first render. Blah.

Attempting to clean it up.
The first version was dark and flat. I made some modifications to the sky sphere, moving the camera around. It looked better, but the drapes looked blown out. I loaded the image into Luminar and was able to improve the colors a bit. It was nice but imperfect. You can check out that version in Mecabricks and decide for yourself. For me, I needed to do better.

After spending an hour tweaking settings trying to make the theater light probe work for me, I gave up. All my attempts to adjust nodes and hack the background didn’t yield better results. Instead, I started over. I replaced the light probe with something brighter. Grabbing a fireworks photo by Alex Holyoake on Unsplash, I imported it as a simple plane. After a few adjustments, I had my final scene. Yet, I had something else still to do.

I noticed some obvious smoothing errors on some of the bricks. The eye and nose were especially obvious. Using some surface sub-division, I cleaned up those issues. Other pieces weren’t as easy to fix: the quarter rounds for example. After spending an hour trying to tweak them, I gave up. The effort didn’t yield better results in the end.

My mantra should be stick to your idea. My deviation drove me down paths of wasted effort. As the final result attests to, the journey taken was worth it.