As my programs attest to, I did a fair amount of digital drawing on my ZX81. As noted in past articles, I tended to use graph paper to design my games. Yet in 1984, I built a simple drawing program called Picture Use. Sadly, I never used it. 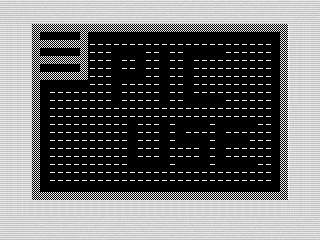 Let’s draw!
The program is quite easy to use. It asks for a background character and then an initial brush. The screen is then painted with that background. The program then prints an asterisk for the cursor.

Drawing is a bit tedious. The brush is printed every move using the arrow keys: 5, 6, 7 and 8. You can change the brush using B, which you will do often. Since you can’t lift the brush, you’ll need to change to the background when you don’t want to paint.

For my own painting, I found it easier to block out what I want and then erase. After a bit, you get a hang of the controls. The cursor isn’t very accurate at times, so I had to fix things as I painted.

Once done, you can print the screen using C. To do this, it removes the cursor and uses ZX81 COPY command. You can also start over using Q.

Making it better.
Picture Use works well, but the interface is basic and dull. The INPUT commands work okay but isn’t preferred. Using INKEY$ to change the brush would have been more immersive. Although doing so would make me to think about how best to change characters.

As noted above, not being able to lift the brush makes painting difficult. It would also have been nice to switch between the background and foreground colors. Thinking about it, assigning your favorite brush to hot keys would have been nice as well.

One final idea would be to include some more modern features such as a fill command. Since the program is pretty small, I could have used an array for the actual screen. I could then use overlays to create menus or display your brushes. Although, the program might be too slow at that point.

A good start.
Picture Use was an interesting find, a good base for future work. Although I didn’t do much drawing on my ZX81, it would be the base I would build on for years to come.