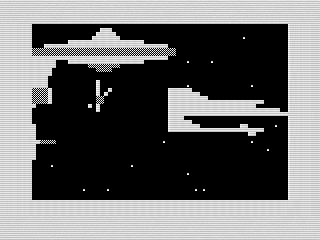 Well, the month is over and life has taken over and delayed my program of the month. For the tail end of September, I offer two programs: Photon and Photon 98. Wait, what? Yep, you heard right. I’m offering two programs this month. Sort of.  Actually they are very similar. Photon is the original program from 1985, and Photon 98 is a minor remake that cleans things up a bit.

Why am I offering two similar programs for your enjoyment?  Thanks for asking. I am offering these two programs because I love them and I really want to share. Photon is obviously my tribute to Star Trek. I am an avid science fiction fan and, having grown up on the original series, it was inevitable that I’d do something with the series. In fact, Star Trek has been an inspiration for many of the projects in my youth. These programs hold a special place in my heart which is why I needed to share them.

The programs aren’t a game, but simply a graphical demo. I find that the 1998 version is visually more cohesive, but the 1985 version isn’t altogether bad. Note that the original program doesn’t automatically run so hit the “R” key and then enter or return to run it. I really should update it but it works and personally I think you should stick with the ’98 version.

Of particular interest is the photon torpedo. It is the source of the demo’s name and the reason I enjoy this program. The torpedo is an animation that I first drew out on graph paper. I created each cell and then placed them into the program using PRINTto animate them. The effect is short, but came out great. Well, in my opinion anyway.

Well that’s it, short and sweet. Enjoy and see you in October. Err, tomorrow!

P.S. I’m not bothering to add a zip file version this month. If you really want one, let me know. Since I’m primarily on iOS, I’ve given up trying to run these on mobile devices. Perhaps someday I will find a JavaScript version, but for now I’m done.