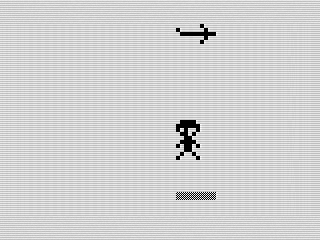 Whoa, it’s August already? Time for another program of the month. Coming your way is Parachute, a deceptively simple reflex game that uses recognizable graphics to give you an enjoyable causal gaming diversion. I’ve been staring at this program for months now as it was sitting on the top of the stack. The airplane and parachute graphics stand out prominently in the listing, making it hard not to notice. As much as I tried to ignore it, Parachute was calling me to type it in. I finally caved and obliged.

I only made minor changes to this program in order for it to start on load and be continuously playable. Parachute originally ended in an infinite loop displaying a flashing “Game Over.” I also noticed that the routine that shortened the landing pad would actually revert back to the larger pad on certain scores. That didn’t make sense to me, so I removed extra conditional tests to prevent that. Parachute is otherwise presented as designed in 1985.

The game itself is deceptively simple, yet complex in its presentation. The flying plane moves quickly and smoothly across the screen. When you press a key, your parachute deploys and you float directly down to the ground. There is no chance to maneuver your parachute, making this game one that relies on timing skills. If you miss the landing or wait too long to deploy your parachute, it’s game over. The higher your score, the harder the game becomes as Parachute shrinks the size of the landing pad. This is probably the most interesting feature of the game since I use the LEN routine to place the pad and confirm the landing. I really like the overall presentation of the game’s graphics. They flow nicely, fit together with a consistent style, and quickly and readily convey to you what this game is about. Overall, a nicely complete package. Well worth a couple of plays.