With the arrival of Spring and warmer weather, I found myself inspired by the cheerful colors. Looking through my pins for ideas, a rainbow sparked my creativity. Thoughts of an Easter hunt with eggs and grass completed the theme. The blocky nature of the LEGO bricks invoke adolescence and whimsy. 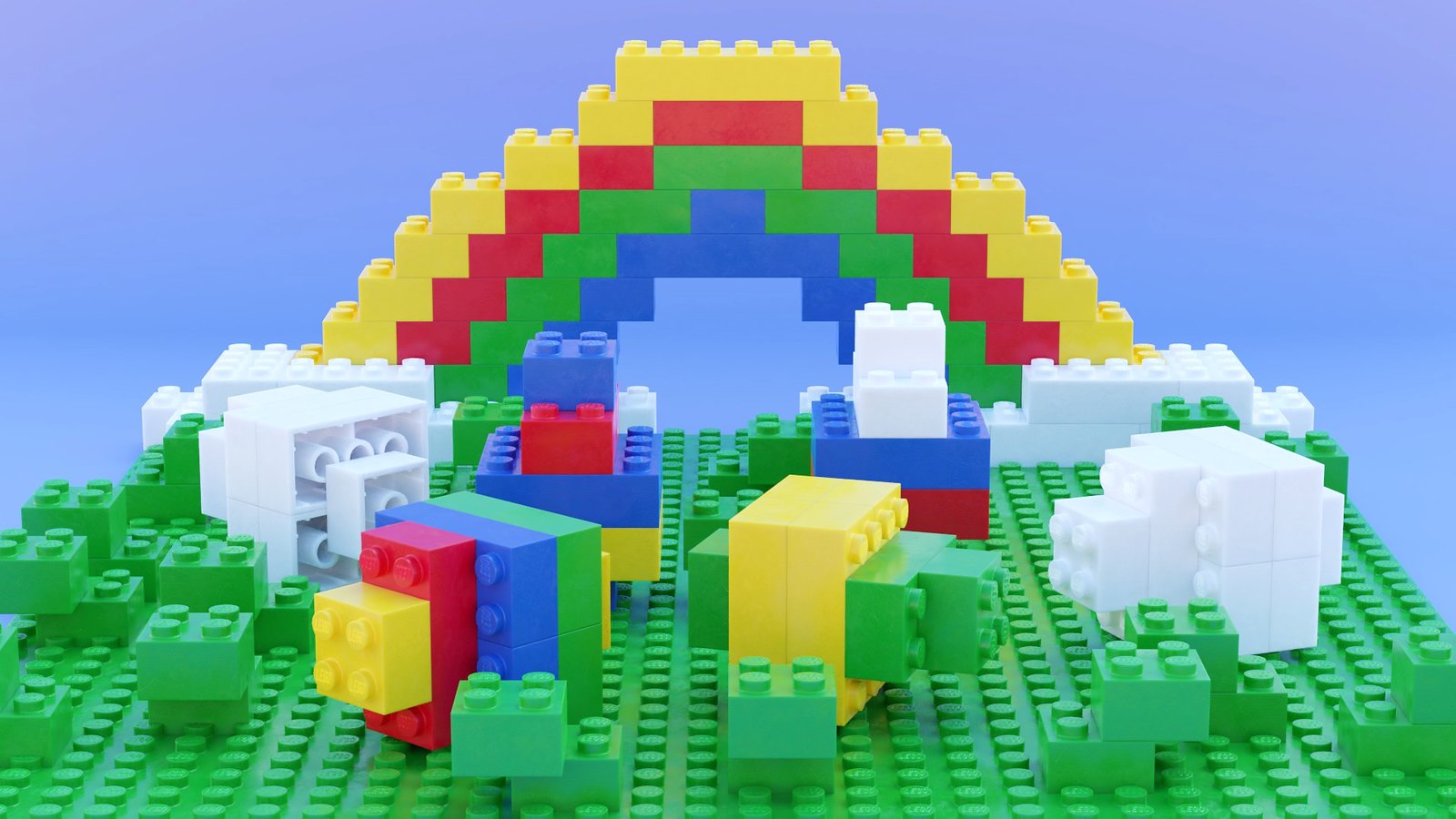 As the SNOT techniques of today didn’t exist in my childhood, many of my early creations were chunky and bulky. Slopes and tiles weren’t as prevalent, and the shape was often close but not lifelike. My imagination filled in the gaps where the pieces couldn’t.

For this diorama, I tried to invoke the Easter theme using wide and colorful stripes on the chunky eggs. Since you can’t get too detailed using 2×2 and 2x4 bricks, I added a couple of white eggs. The shapes are similar, but not meant to be perfect. The viewer’s mind will need to fill in the rest.

The eggs are mixed amongst grass, as if freshly collected. The blades are as blocky, using two square bricks each. To avoid symmetry, I randomly positioned the top block. This evokes a rough curve with a hint of nature.

The rainbow was actually built first. I had some trouble finding the right shape, but the final product is recognizable. I added a few clouds, hiding any gold that might lie at the ends. Completing the look of the scene, the distant rainbow fills the picture with color.

After adding the eggs and grass, I exported the model from Mecabricks and rendered it in Blender. I tried to use a brighter light probe, something with the sun in it. My first attempt was too bright, so I adjusted with a different scene.

A sense of renewal.
At its heart, I meant for the diorama to invoke renewal. The short grass is growing after being cold. The rainbow emerges as the clouds recede and the colors of the sun warms the earth. The colorful eggs represent joy and rebirth. Looking on it with innocence, it can feel young and invited.

Yet, it is also a scene of irony. The eggs are dead, boiled and ready to be eaten. Dipped in dye, the colors are fake and unrealistic. Laying as they are in the grass, they look discarded and forgotten as the children focus on playing.

Even worse, this is a natural theme built using plastic parts. There is nothing organic about the pieces. It is fake and devoid of life, built on a computer that many may feel is as far removed from the natural world as one can get.

As pessimistic as one could be, the renewal theme can still be applied. The plastic bricks are made from the organic compounds of long dead animals. We could be sad and complain about the impact of mining oil and the shudder at the chemistry that created the bricks. In a way, they represent the spirt of those creatures renewed in a different form.

One can get caught up in a circular argument. There is no simple answer here. The observer must decide if they take in the scene for what it is. Or, does one dig deeper and look for hidden meanings. For some, they will hate this image. Many will ignore it. It is my hope, though, that a few will enjoy it.