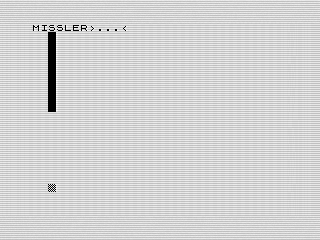 I dug into some older games for February’s program, Missler. A simple yet effective game, Missler is a great example of programs I dealt with in the eighties. In this case, you must maneuver our anti-missile artillery in an attempt to stop the incoming barrage.

A little bit of fun.
Missler is an easy game. Yet one must remember to put it in perspective to the time it was created. The ZX81 is a slow computer to start, as were many in the day. Written in a different era, it is easy to see the weaknesses of this simple game. At the same time, not much more complex games were being sold for $30 on a gaming console not all that better.

Of course, comparing this game to one of those is silly. Written in BASIC, and missing features such as sprites and color, Missler isn’t quite up to the task of the Atari. Yet, in many respects it isn’t that different. Blocky characters and simple movements were hallmarks of games back then.

Worse, playing on smaller screens games like this weren’t easy. Lining up under missiles wasn’t quite the same on a tiny black and white TV. Although, some of the artifacts might actually help. Although not much harder, you can start to picture that things weren’t quite the same as they are today. 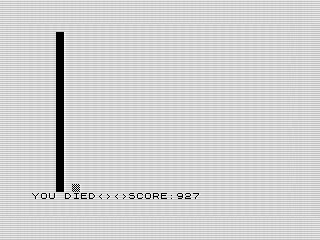 Short, yet complex.
The code of Missler is quite short. One my shorter games. Packed into all that, though, is decent game play that works. Needless to say, short is better.

There isn’t anything special with the code, much of it you’ve seen here before. Much of the twenty lines of code is spent testing variables. Because the trajectory of the missile is known, the game doesn’t need to do any fancy screen peeking.

Although it would probably slow down the game quite a bit, I would have liked to add more trajectories to the missiles. Doing so would have made the game more intriguing. Before making changes, it would make more sense to tighten up the code.

Although short, it could be even shorter. The print statements could be combined. The movement could be a single line of code. The tests, with multiple branches, could be reduced. Lastly, the missle’s movement could be converted to a loop. These changes would tighten up the code, but the game would otherwise play the same.

Short and sweet. That’s it for this month. On to other projects.