I saw a great Pirate Ship render yesterday by saabfan. The water in it impressed me, and I had commented that I didn’t know how to model it in Blender. Scrubs informed that it was easy, providing me the how. Off I went to try for myself.

To my surprise, it was easy. Sort of. Well, building the waves wasn’t too hard. I added a plane to a test scene and then added the Ocean modifier to it. In an instant, I had a wavy plane. Nice! Yet, I would soon learn that there was more to do. But, I still had a few things to do.

Preparation time.
I started with a a trip to Mecabricks to export a model. I had built 616 Cargo Ship some time ago, but hadn’t done anything with it. Now was my chance! I downloaded the model to float in my wavy plane. To my delight, Scrubs had also released the latest Advanced Blender script (0.1.7). I grabbed that as well. But, I wasn’t quite done.

I’d been reading about others trying the denoising feature in Blender and had recently tested it on my Mac mini. It did a great job speeding up my last render, so I grabbed the latest nightly to install on my MacBook.

Setting the scene.
With everything in place, it was time to put it all together. I ran through the normal process to import the cargo ship into Blender. Note that I had to comment out the filmic line in the script before running it due to an issue with the nightly build. But filmic was already installed, so I didn’t have to deal with that.

Once done, I replaced the default ground with a new plane and applied the Ocean modifier. Great start, but not quite the right size. Time to play with all the options until I got what I wanted. For reference, here are the settings I ended with:

I wasn’t quite done yet. Using a solid color didn’t look very water like. After doing a little research, I tried a couple of different suggestions. None looked great until used a Glass BSDF material node with a 1.333 IOR—which matches water.

Since the water was transparent, I added another plane below the water and applied the color I wanted to it. It was a trick I’d used before in POV-Ray. I also tried a few sand textures, but they looked weird so I abandoned that effort, sticking with solid colors.

Render time.
With the cargo ship floating in water, I was almost ready to render the scene. Last steps were to go into Render Layers and turn Denoising on. I then lowered the samples to 128 in the Render pane—no sense going crazy—and started the render.

My first attempt wasn’t bad—a toy floating in a blue ocean or bath tub. My wife, though, wasn’t impressed. She thought the blue made it look like the boat was floating in the sky. Although the color didn’t bother me, the waves did. Time to tweak a few things. 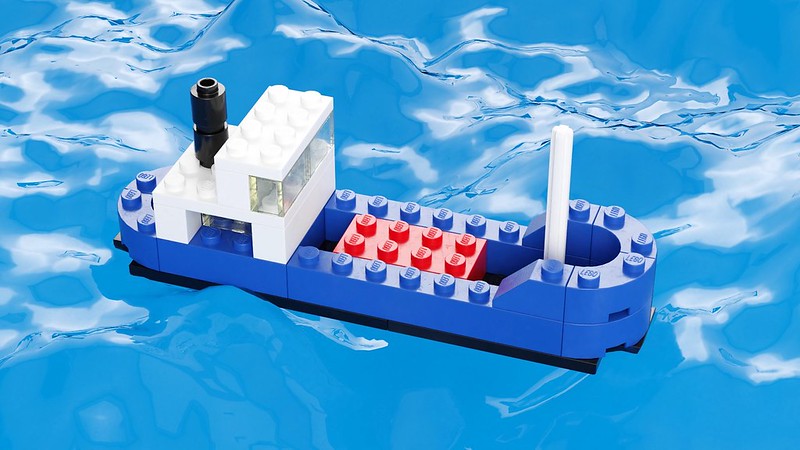 My wife approved of the sea green used in the second version. In addition, I shifted the waves until I got the look I wanted. I admit the result is better, but you can decide for yourself. 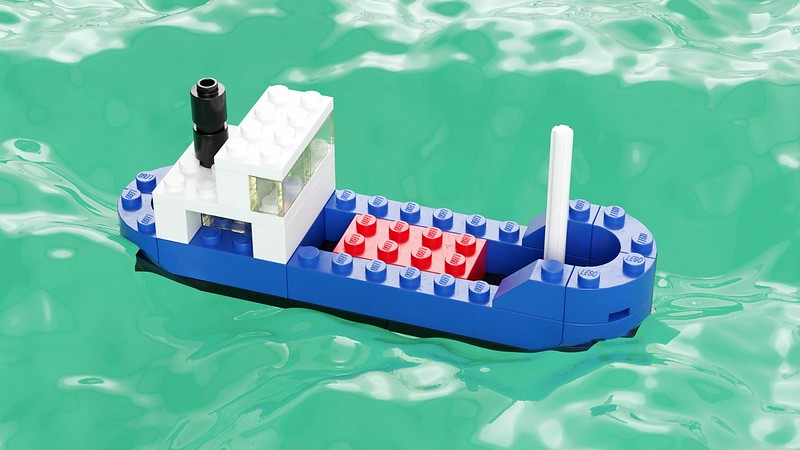 With water now under my belt, I feel like I’m getting the hang of Blender.

Update: If Flickr users are any indicator, the blue version won out: 8 likes for it vs. 5 for the green.