At the end of November, during some time off from work, I dabbled rendering a series of LEGO models I call Big Bricks. Starting out as a “can I do this?” effort, led to me building variations on that theme. To my surprise, the journey culminated with the blogging of Crime Scene on the Brothers Brick.

The genesis of the big brick.
As I’ve stated before, inspiration comes from various sources. In the case of my Big Bricks, it started when I ran across Chris Maddison’s Brick or Treat. They were great, especially the Zombie brick. I began to wonder if I could create one.

As I dug into the description, I learned that Chris drew inspiration from another source: Cole Blaq’s Enter the Brick. Cole’s creations were spectacular, way above my level, but inspiring. I thought, “I can do that.”

After some trial and error, I had my first brick done. Different from Cole’s, but similar. I played with placement before deciding to create my first render with a pair of bricks. Simple and elegant, Big Bricks would be the start of something more. 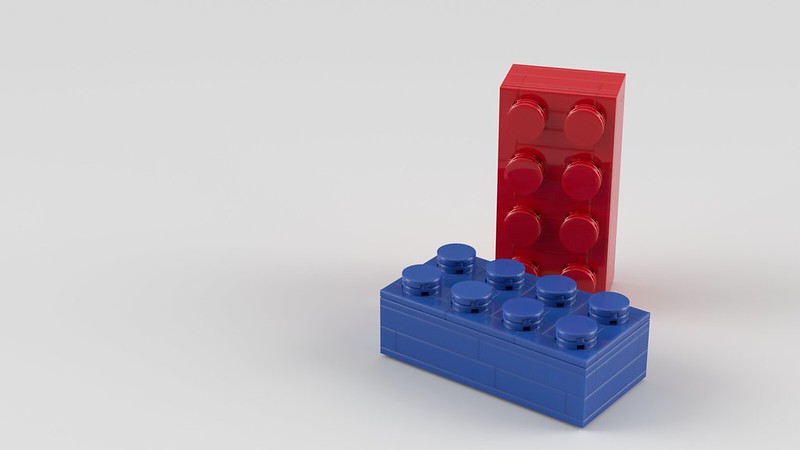 Do plastic bricks bleed?
On occasion I let my darker side seep through. Remembering a build that used red flats to represent pooling blood, inspiration struck again. My mind wandered and I envisioned a bleeding broken brick.

Not procrastinating, as I’m prone to do, I started to deconstruct my blue brick. Red rounds and slopes completed the effect. Blue pieces were flung aside. A day after my last render, I released my second one. 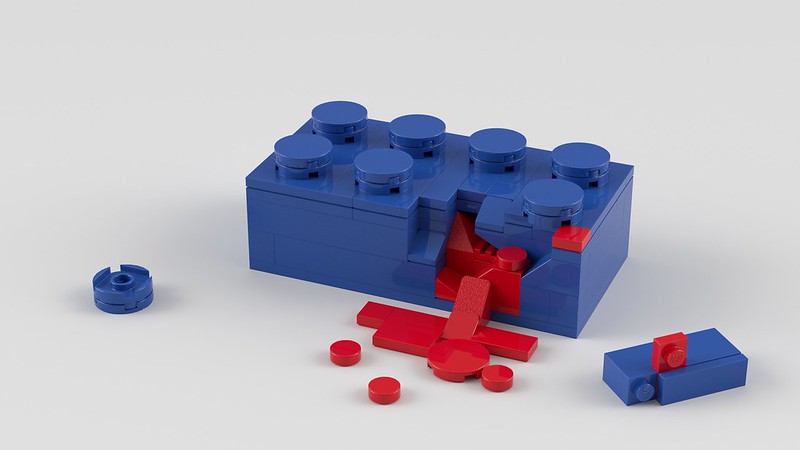 Broken did well, getting a decent number of views with a few likes—good for one of my models. But I wasn’t quite done yet.

A crime to remember.
Having a penchant to watch true crime shows, I envisioned the discovery of my broken brick. Rendering a few of the big bricks in yellow, I placed them around the broken one as if watching. The description was simple: ”My, my, my. What could have broken this brick?” 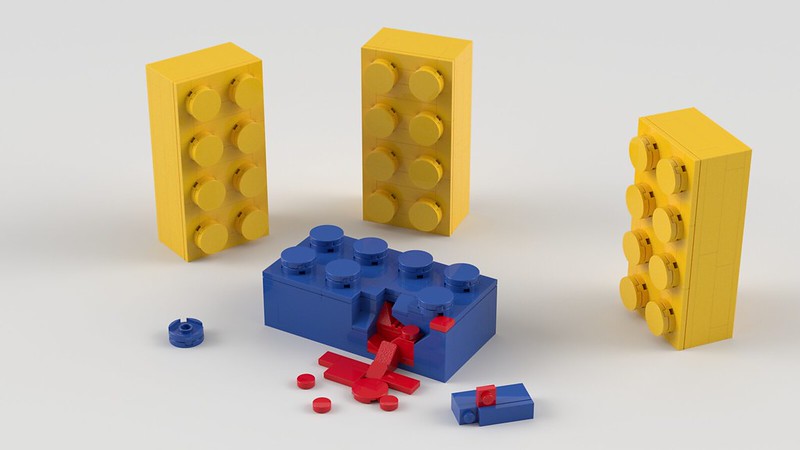 And then I moved on. I realized my broken brick had a floating piece so I fixed that. It was the fixed render that ended up on Flickr, although I left the old version on Mecabricks.

I also played with modeling the bottom of the bricks. The proportions made it easy to carve out the underside. In doing so, I created More Big Bricks to show off the new design. I even modeled a smaller 4x4 brick. 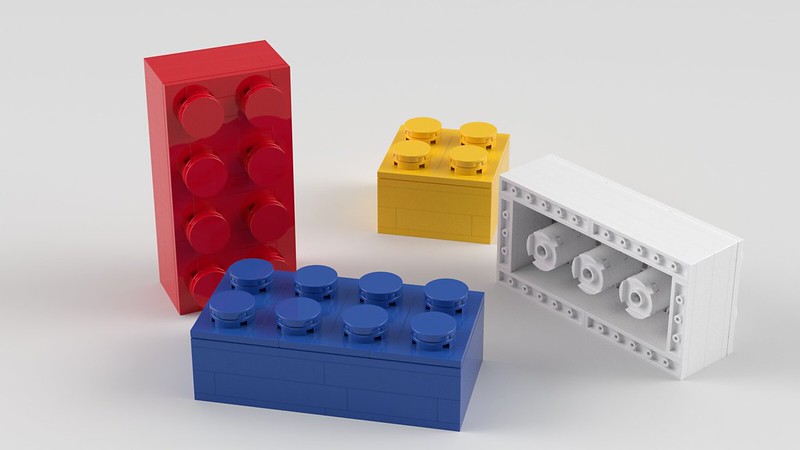 At this point, I was pretty much done with these bricks and was moving on to other experiements. But, there was a request.

Faces can make things creepy.
Checking back on Mecabricks, Kamteey asked, “Why not add a face to the Bricks?” An interesting idea that I hadn’t thought about at the time. Although it broke with the anonymity of the original, it was a worthy challenge.

Using some of the smaller round eyes and candy stripes, I added eyes and brows to the bricks, but no mouth. I didn’t want to get too real here, there was that red blood to worry about. I also played with the broken piece, adding a reverse slope that would fit better with the broken brick.

Once done, I rendered and uploaded it. Because the look with faces was surreal, I called it Creepy Crime Scene. I see the far left brick as a detective, but with the brows they look mean. I wouldn’t judge you if you interpreted them as criminals instead. 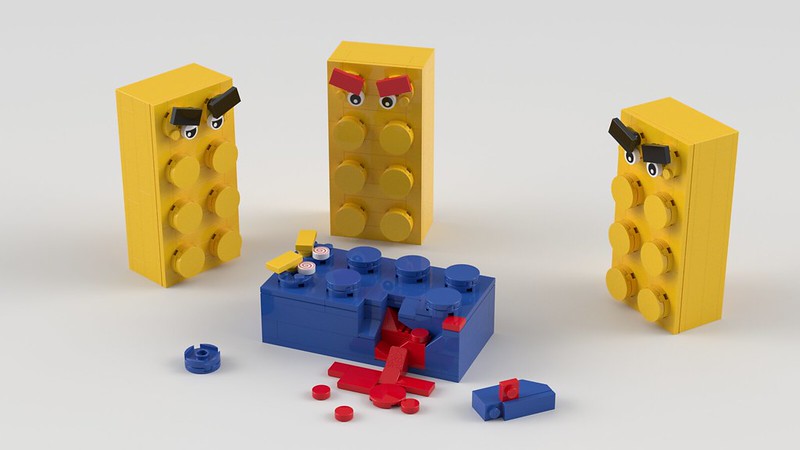 In any case, I was now done. I wasn’t planning a continuing series like Cole. It was time to move on to other projects. Others had different ideas.

Blowing up my Flickr.
Back at work the next day, I started to get a few likes and follow notifications from my Flickr account. My normal volume is a couple follows a year—yeah, not huge, with a few likes after I post an image. That day, I was receiving one every hour. Something was up.

After getting home, I did a quick check and found a comment on both Flickr and Mecabricks. My original Crime Scene had been blogged. Are you just going to leave it there to bleed out? was a rather humerous piece. Rod got the vibe I was going for. The ambiguity of the bricks adds to intriperitation. What was in my mind doesn’t need to match yours.

Not only a surprise, it was a honor to have a render recognized. Not only it was fun to see people liking my model, but it was interesting to see where those likes came from. LEGO builders from all over the world were enjoying something I made.

For me, the fun was in seeing what those new followers were building. There are creative people in the world and I enjoyed seeing what they came up with.

Aftermath.
To my surprise, the likes lingered for a couple of weeks. As a pleasant side effect, a few folks dug through my collection and liked other models as well. I sure hope my new followers stick around. Inspiration might come knocking again.