I was having fun again with LDD and POV-Ray and thought this would make an interesting render after my first attempt. I also uploaded a slightly different version to LEGO’s gallery with different eyes stalks. 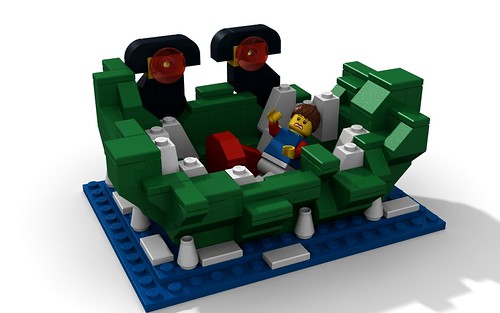 Overall, this is probably the best of the dozen or so attempts I made a rendering this model. Like “Waterfall” this model was exported to LDraw, imported into LeoCAD and LDView and then exported to POV-Ray. I then converted the bricks, created a nicer version of the falling swimmer from my library, before rendering the latest 3.7 beta. It was fun doing a face again since it has been some time since the last one. The hair is exported from LDView since it had a nicer mesh, but it isn’t entirely accurate. I also still see some Radiosity artifacts, something that still confounds me. Though, it came together rather well in the end.