Now, Water Bug II is an interesting game for me. I was so excited when completing the first version, that I wanted to build another version with ten more boards. The funny thing is, the games look a lot alike. In fact, if you weren’t paying attention, I wouldn’t be surprised if you thought you were playing the same game. Let’s dig deeper on both the similarities and the differences.

The title screen should look pretty similar. I was pretty proud of the first one in the original. But I added a little more this time with a rotating credit at the bottom. This is the final version. I first created a test one using an “se-graphics” logo. I was having fun thinking about running my own company back then. It wasn’t to be, but the idea lives in some of my different programs and games from that era. The final version in WBII swapped that out for a simple “(C) 1984” instead. 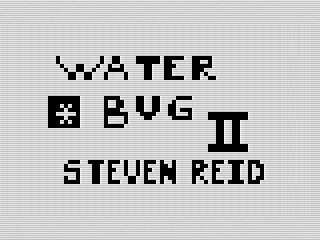 Now, the actual code to make the rotating logo work is pretty simple. I just put the text in an array. I would then print the first 128 characters (what you see) and rotate the top line to the bottom of the array in a loop. The code works pretty well and looks nice too.

Now, Board 1 should look really familiar. It is pretty much the same board as the first Water Bug. In a way, I was trying to tie the two games together with the same intro. The code, however, is very different. I reorganized things quite a bit and cleaned up some of the code as well. Water Bug II is more of a rewrite at this point than just a new game with new boards.

Completing the board, you’ll get a random score as before. Some things never change. In fact, I didn’t fix my math problem either. Oh well. The transition is also the same, nothing new there either. At this point, the two games play the same and look the same. Although it adds some continuity to the first, I really should have changed the first board up a bit.

Going into Board 2, things continue to look the same. However, this time the secret path is a bit more complex. Now you have to go along the bottom first and then along the right edge to display the treasure. A bad design, in my modern opinion, but again I was the only one who was ever playing it. As noted last time, I really should find a better game mechanic for this board or, perhaps, leave it out altogether. Let’s move on.

Now we are getting somewhere.

Board 3 is really the first departure that Water Bug II takes. Unlike the scrolling board of the first, this time you are presented with the moving treasure from Board 4 of the first game. Instead of pillars, you now have random asterisks and some minus signs. Now, this is a bit of a cheat as normally those are player switches. This time, they are for the treasure. If it hits one, it randomly teleports somewhere else. Not very nice. Overall still an easy board. I do like the mechanics and it starts to show that Water Bug II isn’t just a repeat of the previous game.

If I were to fix anything in this board, I’d redo the switches and use a different graphic. In that way, it would be more obvious that they aren’t something the player should touch. Continuity is key in a game like this. Now, to make the board even more fun it would be cool if the user could touch and get teleported as well. To be honest, I doubt anyone would use it as it wouldn’t really help as the board is current designed.

Now Board 4 should look familiar. It is a variation of Board 8 and Board 10 from the first game. Here you have two scrolling barriers with a switch. There are also three vertical barriers you have to navigate through. You have to navigate through the scrolling barriers first and go tag the switch. It will then reveal another switch. Navigate across and hit it to reveal a the treasure and an enemy asterisk.

Now outside of some strategy to get the enemy away from you, it is really just a game of getting through and grabbing the gold. My strategy was to lure him up towards the top first and then head through. Note you can’t bait the enemy into another tower, I added a check to prevent that. Just a mad dash to get down to the treasure.

Now Board 5 is another variation of my favorite board from the first game of the same number. This time, however, the rotating seaweed is in the center of the screen. The seaweed now has a barrier as well, making you move around a bit to get to the switch. This time, the treasure gets placed into the rotating seaweed, making it a bit of a challenge to grab. I’m so mean.

At this point, you are halfway through Water Bug II. Now, as before, any deaths drop you back to the start. Not nice. It only gets worse from this point on. WB II is not a forgiving game, more so than the first. Again, I really should revisit that game mechanic here.

Now, with Board 6, I really go off the deep end. This time you have a quadrant of boards and a switch. Nothing super exciting. Except for the 4 rotating barriers in the middle of the board. Yeah, that is tough. In fact, it is pretty hard to get through at all. In fact, it took me a good number of tries to get to the first switch.

There are a couple problems with this board. For one, too many blocks and not enough room to move. The patterns are hard to follow. The second problem is the routine that checks what you hit is off. You’ll often hit something you didn’t actually hit. It is very confusing and frustrating.

I have mixed feelings on this level. On one hand, I really love the look and challenge. On the other it feels unfair and glitchy. Not a great place to be playing a game. I can’t even think about playing this on a real ZX81 with the crappy membrane keyboard. Great to see innovation, but this board needs some work.

Board 7, fortunately, is not as mean. It is a redo of Board 4 on the first Water bug with pillars and a moving target. This time, though, you have to do it twice. The first tag is to touch a switch. The second is then to tag the treasure. Both move randomly and are quite hard to tag. Careful not to touch a wall trying to get to them. At least you get a breather before the next board.

Board 8 is pretty much a replay of Board 6, but with a different design. This time, you have to get past two small rotating barriers. There is a way through as I planned it on graph paper. But it pretty much sucks getting through once, much less 4 times. You’ll have get to the switch, then retrace your steps back. Again, great innovation, but it sucks as a level. Water Bug II is like a very hard, balls to the wall version of Water Bug. Yeah, its tough.

Board 9 is a pain as well. It looks simple, with a blank screen, a switch and an enemy. This time, you touch a switch and the enemy turns into an white dollar sign. Sound familiar? It like the game of tag from the Board 6 in the first game. Yeah, I didn’t like it then, I still don’t like it. The visual is at least more obvious this time, but no less a pain. You tag the dollar sign and it reveals the real treasure. But it also becomes the asterisk enemy again. And, like before, odds are you will be touched by that enemy. Yeah, it sucks.

Board 10 is a bit of a problem. It is tough in that you have a lot of elements to deal with. First off, it is obvious that I hadn’t played through Water Bug II all the way. I had pulled it from tape many years ago and it appears that it has a few glitches because of that. This board didn’t even print at first as there was some flipped characters that I had to fix. Once I fixed that, it printed fine, but, the enemy wasn’t work right. It was printing numbers! Another tape bug.

Okay, with that fixed, I started to play. The board has a number of columns with lines split in it. There are two rotating barriers that you have to slip through the holes. You need to dodge the enemy and hit a switch. The enemy prints a tail. I’m not sure that was intentional. I went back and realized it was supposed to print the CHR$ Z. This printed the asterisk correctly.
I wasn’t sure why I did that, then it dawned on me. I was using Z to capture the tile the enemy started on. Because it can move through the barriers, I didn’t want it to clear them. This ensures that any of the black blocks are placed back in the board as before. Kind of a neat trick actually.

Now the board is a bit tight and the enemy will walk through the barriers. Not nice. I was able to navigate down and grab the switch, but it was tough getting back to the treasure. That said, it was difficult but not impossible. I actually like this board, even if I struggled to clear it.

Summing up the game.

Besides the impossible tasks I ran into before, Water Bug II is actually a pretty innovative iteration on the first game. Even so, it needs some work as well. Adding lives and the ability to replay boards would be good suggestions for this version as well. The two impossible boards really need some work. They aren’t bad, just need the difficulty brought down just a little.

That is the one thing that irked me with earlier games. Since humans have a limit, many games just would increase difficulty beyond most human reaction. This is difficult, this is impossible. That isn’t a good way to make a game fun. Water Bug does a great job of being challenging with the randomness of the game. There is no value in making it even harder. With a few tweaks, I really think it can be the great game I thought it could be.

In fact, the balance is really nice in the game. It eases into the game, adds in some tense game play, and then gives you a breather. It really isn’t a badly designed game, especially given the era and my age. With some work, and fixing all the bugs, the game would shine. Now that I’ve figured out some of the issues, and glitches, I can work to fix that. Then, with that done, I’ll dig into cleaning up the boards and making them more fun.

Like I sad, the core play is there. Now lets unlock it and make the game fun too. Plus the code, although better than the first, still has similar problems. I do checks in the wrong order. The scoring is broken. I still have a lot of repetitive code. At least I learned that GOSUB’s scan from the top of the program, so I moved all the routines to the start such as the tests for movements. That speeds up the program a bit given how long it is. It is noticeable against other programs of mine and something that I was surprised to see.
Now, I should go figure out how to fix all these programs!