Last week, I shared my POV-Ray version of LEGO 590. Now, it seemed like a good time to build a Blender version. Starting in Mecabricks, I was fortunate to find that awesomo had recently built the model. Although missing a few parts, it gave me a shortcut into building a realistic render of the box art. Starting as a simple idea, my journey towards the final image wouldn’t be a straight one.

My first thought was to add the missing parts, much like I did with my 588 Police Station render. Using the Mecabricks model as a base, I first corrected a few errors I noticed and reoriented the model. After it was cleaned up to my liking, I added in alternative parts where needed. This included the no entry sign and areial antenna.

With that done, I loaded up Blender, imported the model, and positioned it within the scene. Using the default background, I decided to keep this one clean and crisp and loaded in a good studio light probe. The first render looked good, but I wanted to add in the stickers to get it closer to my POV-Ray image.

Creating stickers usually takes me a couples of hours. As luck would have it, I found the sticker set on the web, making it easier for me to trace what I need. Loading up Boxy SVG, I started the work of tracing out the images. The final results look good, but took a lot longer than I expected. Comparing the image to the Mecabricks version, you can can guess where I got distracted. 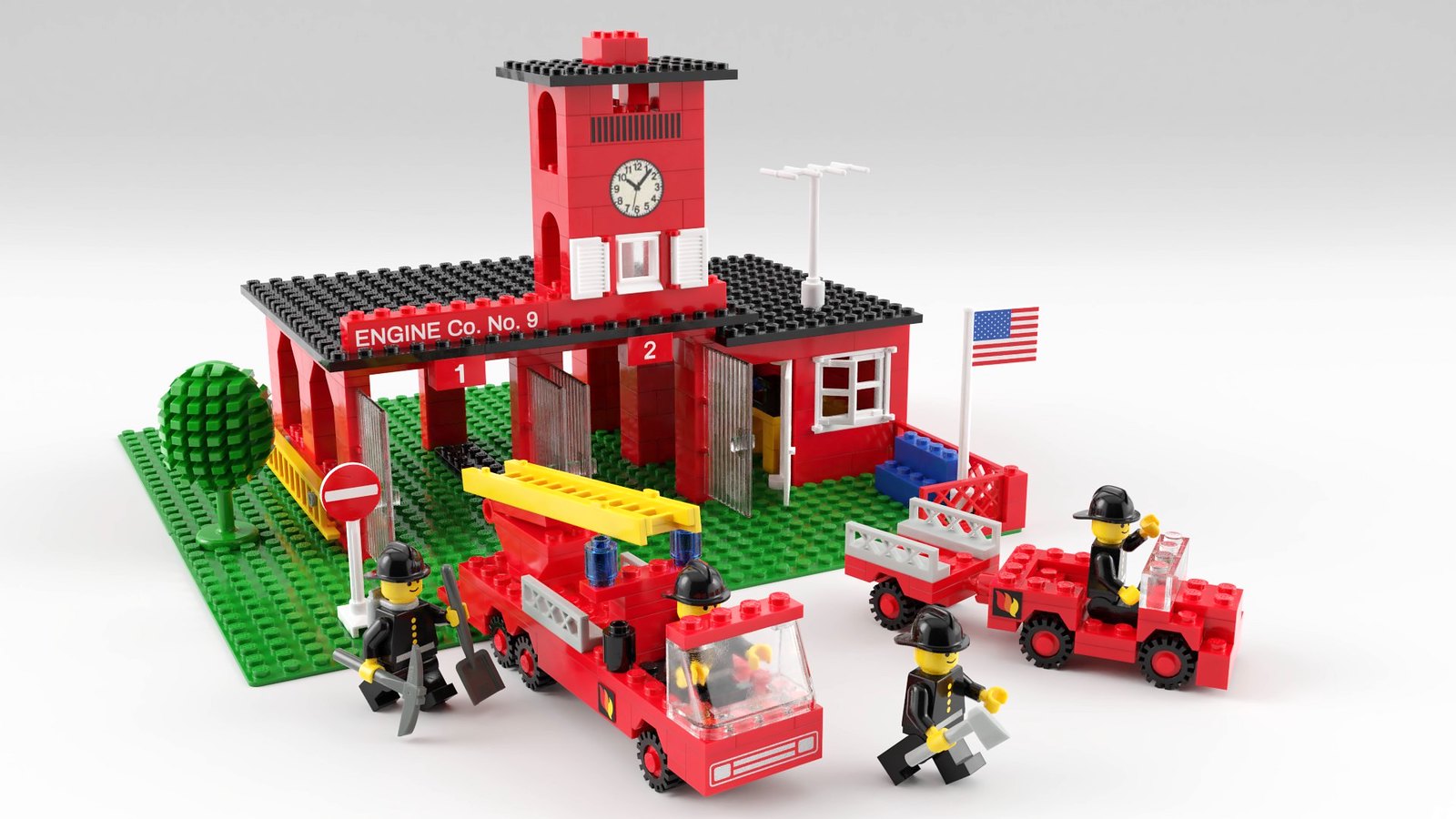 After I started tracing my stickers, I got distracted with the missing parts. Although my alternate parts looked fine, I had recently changed my mind. For the last couple of days, I’d been playing with LeoCAD and Blender. It had me asking myself if I could use the LDraw parts in my model. No longer content with my submitted parts, I decided to swap them out,

First, I created an LDraw file using LeoCAD. Then, using the LDraw importer I as experimenting with before, I pulled each part in. Now as the real test to see if they would fit. Given LEGO bricks have defined dimensions, I was hopeful they would work. After playing around with the scaling, I found that the LDRaw parts did fit well with the Mecabricks ones.

With that done, I then copied over the Mecabricks material nodes to match the other parts. To my surprise, they don’t look half bad. In fact, I doubt you would have noticed if I hadn’t told you. Although, it wasn’t without without issue.

While positioning the ladder, I struggled to line it up. The rungs wouldn’t fit right on the pegs. At some point, I gave up and left it lined up as close as possible. You couldn’t notice it in the first render, but things didn’t look right when I was rendering the back. It was then then that I realized the scale was wrong. In fact, I had it correct to start, but when lining up the tree I thought it was too small. The problem, it seems, was I had placed the tree too high.

In fact, positioning was the hardest part. I spent a good amount of time figuring out how to align the parts to the existing model. Blender offers features to make this easier, which it forced me to learn. After a lot of trial and error, I was able to get them pretty close to existing pieces. To make my life easier, I hid the existing parts. This lets me turn them back on if things don’t look right. With that done, it was time to get back to the stickers.

As I had done before, I traced the stickers into the UV maps needed for each part. Once done, I could then map those images onto the bricks. In the past, I would cheat by using a brick with a different image. After exporting, I would swap it out with my own image before rendering. This made it easy for me to test and, if all went well, I could submit the images as future stickers.

Yet, in the current version of Mecabricks, you can now build custom parts. This cuts out the need for me to export bricks as I could build them within Mecabricks. The system isn’t quite as intuitive as I expected. After watching a video from Scrubs, I was able to get a couple bricks crated.

With that done, I could import those custom parts into my model. Using the workshop, I swapped out my blank pieces with the new custom ones. It was all very easy, except for one problem. Not all the bricks are available yet for custom stickers. In my case, Mecabricks lacked an editable 3008 or 8x1 brick.

Although discouraged, I decided to press forward with what I could do. The numbers over each garage worked, as LEGO part 3004 (2x1 brick) was available. I thought about using my old trick to swap out the sticker of another 8x1 brick. In the end, I decide to add the image as a separate sticker.

Part of the reason I did that was because I need to add the clock and flame stickers anyway. To do this, I imported each sticker as an image and rotated them into place. This took me a good amount of time as I had already rotated my model into place. A worth challenge, though, as I learned a few more Blender commands in the process.

Although my stickers aren’t perfect, it works well enough and the results looked good. Part of the reason I like the custom parts is that they use the proper materials to build. Doing it this way, I lose the materials, making them look flat next to other parts. Yet, as stickers, the look works pretty well. For a moment I thought about ways to make them look more like stickers, but I ended up deciding against that. I could always revisit it in the future.

Showing off the rest of the model.

With the final image complete, it was time to work on the back. I’d already decided to model it before I began working on the stickers. The office is hinged and you can open it up as a play area. It is a neat feature, and I wanted to show off that design element.

For some variety, I also wanted the minifigs to be in different positions. To accommodate that, I’d built an alternative scene in Mecabricks and exported it. I’m not sure how that fireman gets on the roof, but since there is a door there I thought it fitting. The easy part done, now I had to get all of those new parts and stickers added again.

To do that, I decided to import the back model into the same Blender file. This way, I could align the two models, then hide the first one. Because I had kept all the alternative parts and stickers in a separate container, they lined up and didn’t require repositioning. I then hid the original model. With that done, I rearranged the camera to show off the new perspective. 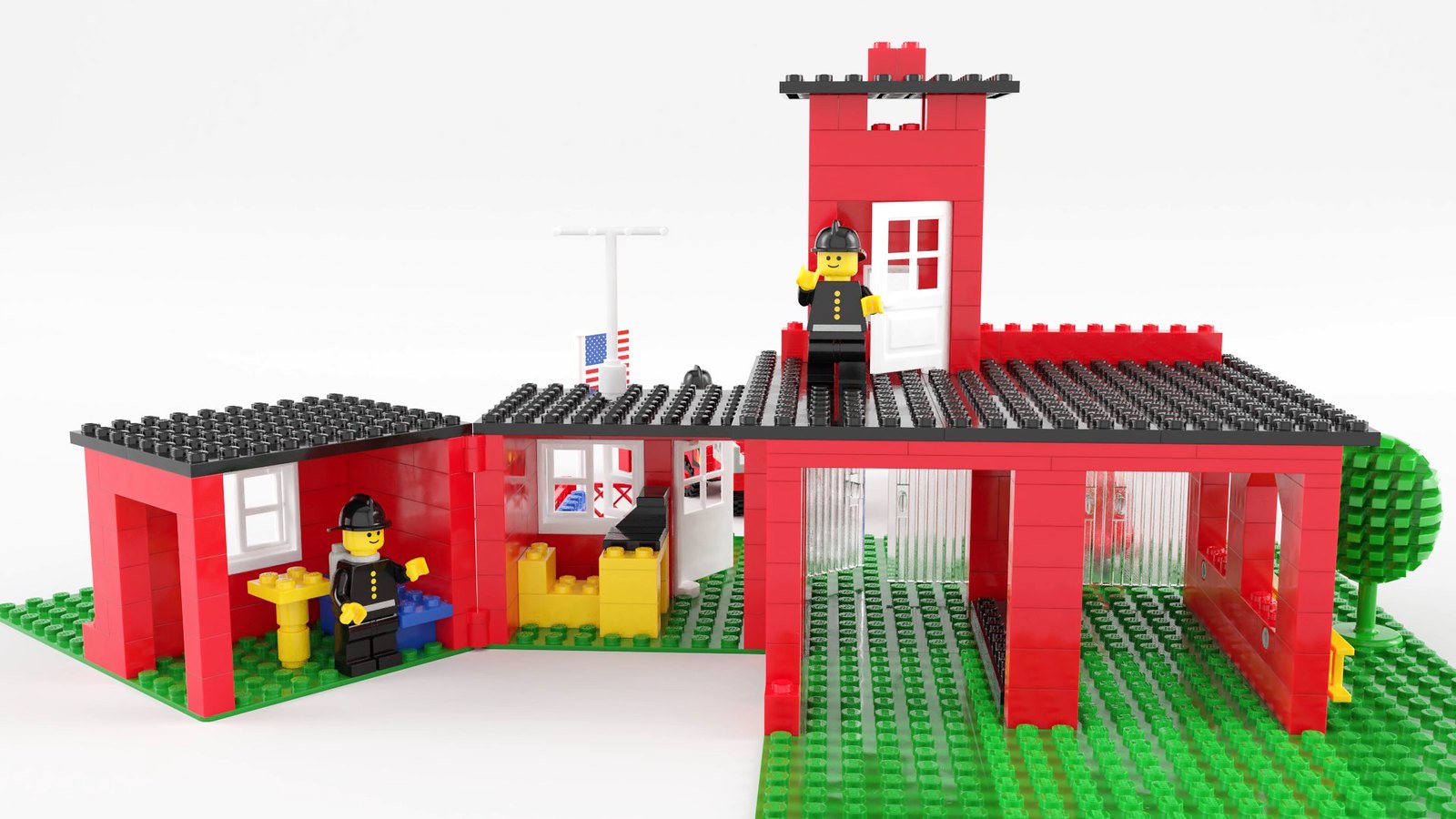 The final render of the back with the corrected parts is above. Much of my time on this model was spent correcting little mistakes. The floor lighting looks odd, but seems to be an artifact of the reflections. I’m sure I’ll find some more issues, but I’m ready to move on.

I already have some POV-Ray images done that I still need to share. Plus, my mind is already thinking about my older models and how I could apply my new techniques to them. The possibilities are endless and I now have plenty to do.