Ah, can’t you smell sweet nostalgia of this LEGO set from 1979? One of my larger town sets as a child, 588 Police Headquarters was also one of the first ones I built in POV-Ray. Looking for something else, I ended decided to check if 588 was in Mecabricks. To my surprise, it wasn’t. This gave me two opportunities. The first to build the set again, and the second was to render it with Blender.

Revisiting a great set.
Reliving my childhood, I enjoyed building the set once more. As I placed each piece in their digital location, I could still remember the feel of them. The design of the jail, with those yellow fences, always brings back fond memories. I love the yellow desk and red phones in the administration and mechanic’s offices. They cater to my inner child’s imagination. I cherish all the unique and useful pieces in this set. Believe me, they were well used.

I tried to recreate that playfulness in the final Blender render. The set is inviting and wants you to play with it. The three vehicles all have different purposes. I love that there are four minifigures that have unique jobs. The only thing odd about the set is that it doesn’t have any criminals. Funny, but I don’t remember any bad guys in the old LEGO sets. That jail must always be empty. Sticking with a clean background, the resulting image looks nice. 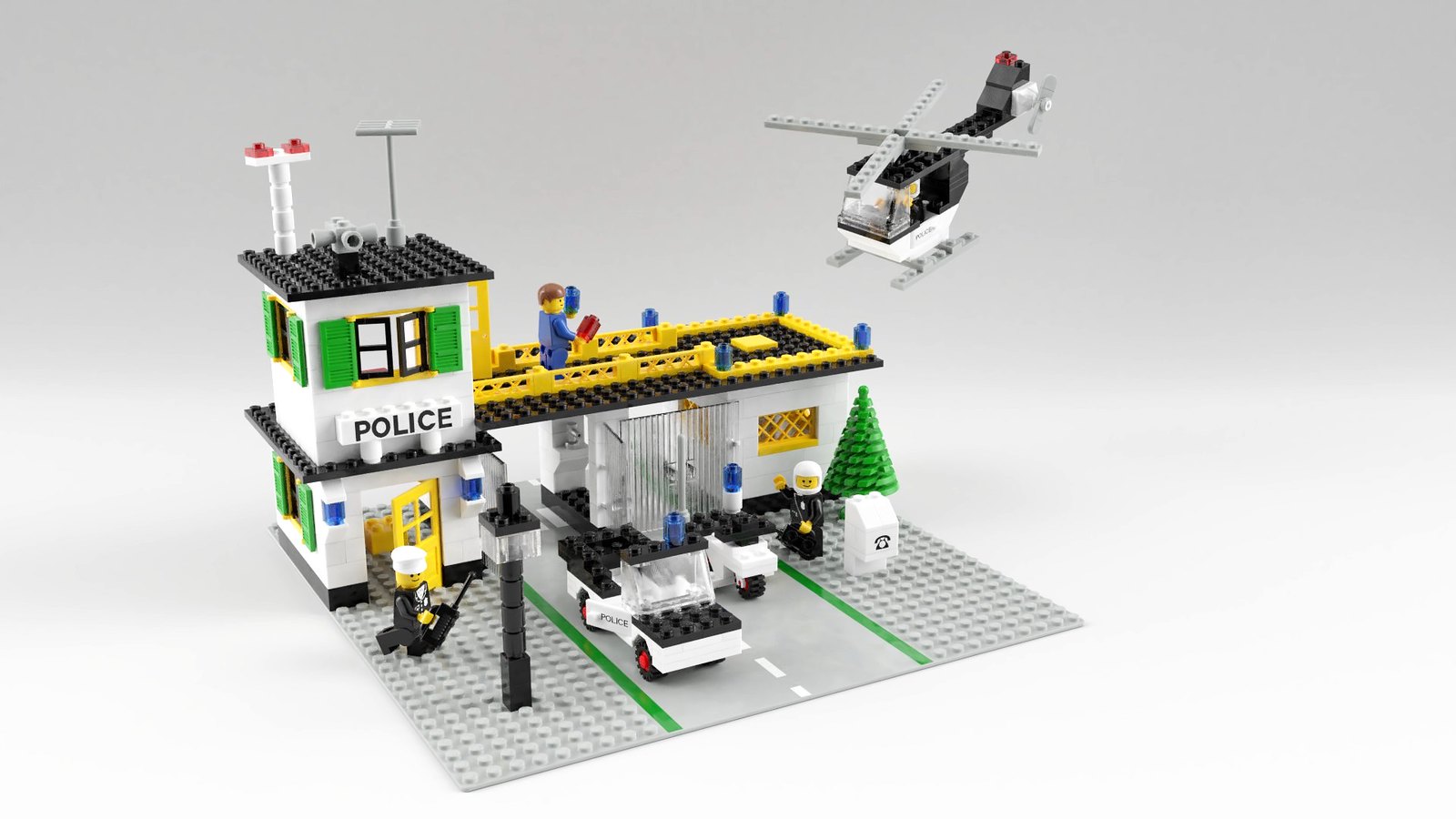 As I noted before, I had rendered 588 before in POV-Ray. In fact, it was the first set where I created alternate scenes, allowing me to show off the front and back of the set. Because of that, I spent a fair amount of time modeling the unique and varied pieces in this set. Although the positions are still the same, I did render the back side in Blender so you could see the offices. 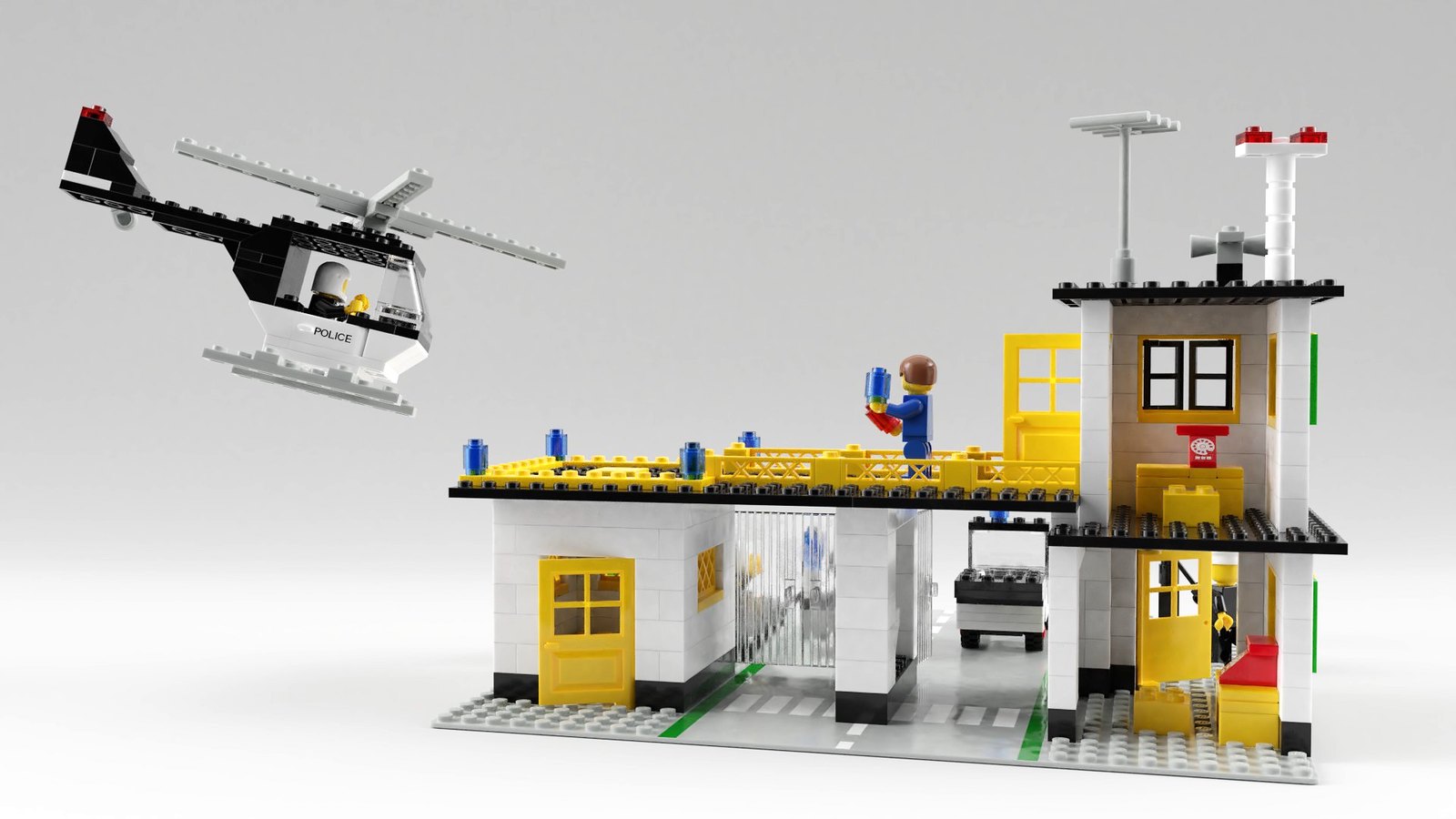 Unlike the Mecabricks version, it took a couple of years to complete the build in POV-Ray. For the era, the results were worth it. My goal is to revisit that build and update the lighting and background. I’ll try to upload the original images to show how they differ. As such, I won’t go into detail here. Instead, I’ll share that in a future blog post.

Focusing on the build.
The set took a couple of hours to complete in Mecabricks. The first difficulty was finding a complete set of instructions. Seems a couple of images were missing from the scans at a few sites. Sure, I could get off my butt and find my instructions. But I wasn’t in the mood to hunt them down. In the end, I did find a complete set I could work with.

The bulk of the build was smooth and fast, but a few pieces are still missing in Mecabricks. I had recreated a couple already, importing them from other builds. But I realized that a couple weren’t quite right and required fixing. Those fixes slowed me down, but helped improve the build.

After finishing the main model, I spent a good amount of time positioning the minifigures. Like what I did in my real builds, I tried to give them life by making minute adjustments to the arms, hands and head. My goal was to add a sense of life and movement to the build. Beyond the figures, I added to the effect by opening doors and windows a bit. The helicopter is the most dynamic, flying into the set for a landing.

Worth playing with.
588 Police Headquarters is a fun and friendly set. The set design, although blocky, is cheery and colorful. LEGO sets from this era were bright, often using primary colors that hinted at real life. They often didn’t replicate it. This set is a great example of that balance between what a child wants versus exact realism.

The play area is full of action. Three different vehicles grace the set for a young child to play with. Although, to me, they are the weakest elements. Functional, they designs are too blocky. The building itself is well designed. The furniture is sparse, yet recognizable. The use of flat bricks on the desk is an interesting detail. This is especially true given the blocky chair and jail bed. Although, I can assume that was so you could attach your mini-figs to them.

The details don’t end there. The mail box, lamp post and tree remove dead space at the front of the set. The landing zone is well designed, and the antennas make good use of the roof. With lots of doors and windows, the set is begging you to play with it.

588 Police Headquarters is an easy recommendation, paring well with other town sets. Plus, it was fun to render over 40 years after I first put the set together.