Fall weather brings colder weather, colorful trees, and Halloween! The original movie was still a classic in 1984, even if a few sequels had been released by the time I wrote this program. Lacking the chills of the movie, my Halloween tries to convey the futility of running. Michael always wins. 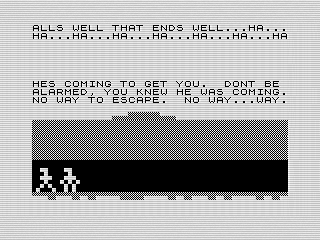 You can’t escape.
Although it has been a few years since I’d seen the animation, halloween still works. The program shows a few scary lines of text over a sunset scene. Two runners make their way down the street, but one has the edge. Before long, he catches up to you.

Ending the scene is the ominous text that you're caught. The program leaves you in the dark before starting over. In a way, the program is telling and ironic. The Halloween franchise seems to never end. Michael dies, yet somehow survives. In an endless loop, Halloween never ends.

A bit of tricky code.
The program itself is straightforward, yet elegant. Halloween prints the initial code and builds the street from the bottom up. It is a neat effect, which is unsettling and adds to the ambience.

The runners are a series of three strings held in an array. This does two things. One, it make it easy to rotate through the animation. Two, it saves on memory. I use two different variables to track the animation and location of each runner. But, the second runner moves a little bit faster. 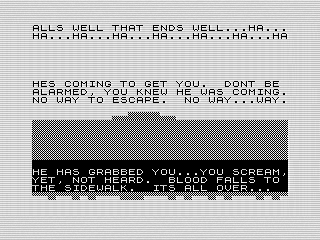 Leave this one alone!
To be honest, I wouldn’t change anything in this program. It runs well, smooth and clean without jumps. The story makes sense. The code is clean and readable. I did fix some minor spelling errors and added the autosave code. But those are inconsequential. A good effort all around.