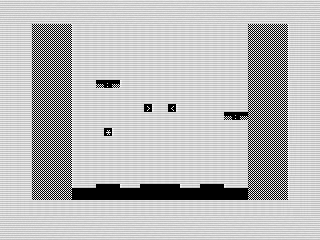 March’s program is Lock £ Fire. I wrote this graphic game in 1985, although I have to admit I don't remember it much. It is a bit hard to play as the keys aren’t very sensitive and the aliens jump around as you try to “lock” onto them. It doesn’t help that I used an odd keyboard layout which adds to the difficulty. The aliens are shooting at your shield and, if they get through, the game is over. Note that you don’t kill the aliens, but they may change their look. When you shoot them enough, the next level starts. Every 10 hits will clear some of your shields as well. Boy, I must have been in one of those moods when I wrote this.

Looking over the listing, it was interesting to see that I was using the PEEK command. It reads the character from the screen in memory to determine when the aliens were hit. The original program used FAST and SLOW in an attempt to speed up the screen refreshes. I found it unplayable in my emulator with them in, so I removed them in this version.

Give it a try and don’t yell at me too much when you die. 😃