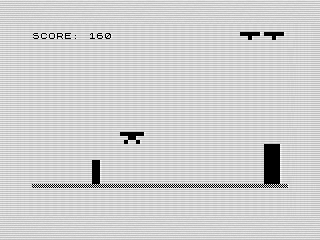 Yes, I know I’m late. June is almost over and I’m sure my adoring fan is up in arms. I do have one fan, right? In any case, I’m breaking tradition for June’s Program of the Month and posting a more modern program. Pole Dodge 2 is my revamped version of April’s program. Before I dig into the details, go play it. It’s real easy, just use the “Z” and “.” to bank left or right. No really, go play it. I think you’ll find it much more enjoyable this go round.

Okay, so what’s new? If you remember my rant on the first Pole Dodge, you’ll find this version much more entertaining. The first version wasn’t a bad attempt, it was just slow and not fun. The heart, however, was there and I tried to bring that heart forward. There are poles that move at you. You still dodge them. The difference is in the execution. There, you will see differences.

First, the spaceship is now a plane. That plane banks with your turns and doesn’t move until the bank is complete. This adds a bit of strategy to the movement. The plane now flies above the poles instead of skimming underneath. This was more of an esthetic change. Banking a low ship would have meant dealing with overlapping graphic elements and added complexity to the code. So, by flying it above the poles it looks better.

Moving to the poles, they are now shorter but move into place with a perspective look. They are also solid without the pattern of the original. I liked the older look but it didn’t look right in this version. I’m still not a huge fan of the block look, but it works. The poles are now randomly placed and increment in number. However, they don’t overlap like before. This makes it a bit harder to dodge five poles on-screen as they are a bit wider. Fortunately, they don’t all grow at the same rate which is something you can use to your advantage.

I added in a few other minor touches. There are three lives displayed in the upper corner as planes. When you crash, I let the poles on-screen roll past your explosion. A small touch, but something I thought would look better and make the program feel a bit modern. I know, odd trying to make a 30-year-old computer look modern, but there it is. Oh, I compiled the program using MCODER II. Yeah, it’s fast! Did you notice that? No slow-moving controls here. Although, it does bog down a bit the more poles displayed. That is probably a good think as it does get progressively harder to dodge that many poles.

If you are overly ambitious, feel free to look at the code. Anything you think could be done better? I thought about adding a sun moving across the horizon as a sort of timer. Make it through a day and it would start a new round. Sadly, I was starting to run out of memory and I wasn’t sure it would really add anything new. What do you think?