July 4th is bitter sweet for me. I’ve always enjoyed the holiday with its fireworks and celebration. Food, fair and patriotism mix for a usually fun day. Yet, my wife’s mother died on the 4th, making it a day of remembrance and sadness. Time to find something to take my mind off it.

More sadness to deal with.
This year, we are stressed even more as her sick father lays at home in bed over the holiday. As we watch over him, it is hard to think about much else. We know he isn’t in pain, but seeing him unable to move fills us with grief. It is hard focusing on much else, especially today.

But, during these hard times we must find the positive. It is easy to wallow in the pain. To keep me from that today, I got got up early this morning to enjoy a local 5K run. It was great talking with fellow runners and making a new friend or two. Although a short diversion, it was welcome.

A challenging diversion.
Over the last few days, I also leveraged down time to do a little LEGO rendering. Like running, it offered a some relief to the stress of the situation. Not having Internet at the time, to my surprise I had a perfect model for the holiday: 21006 The White House. 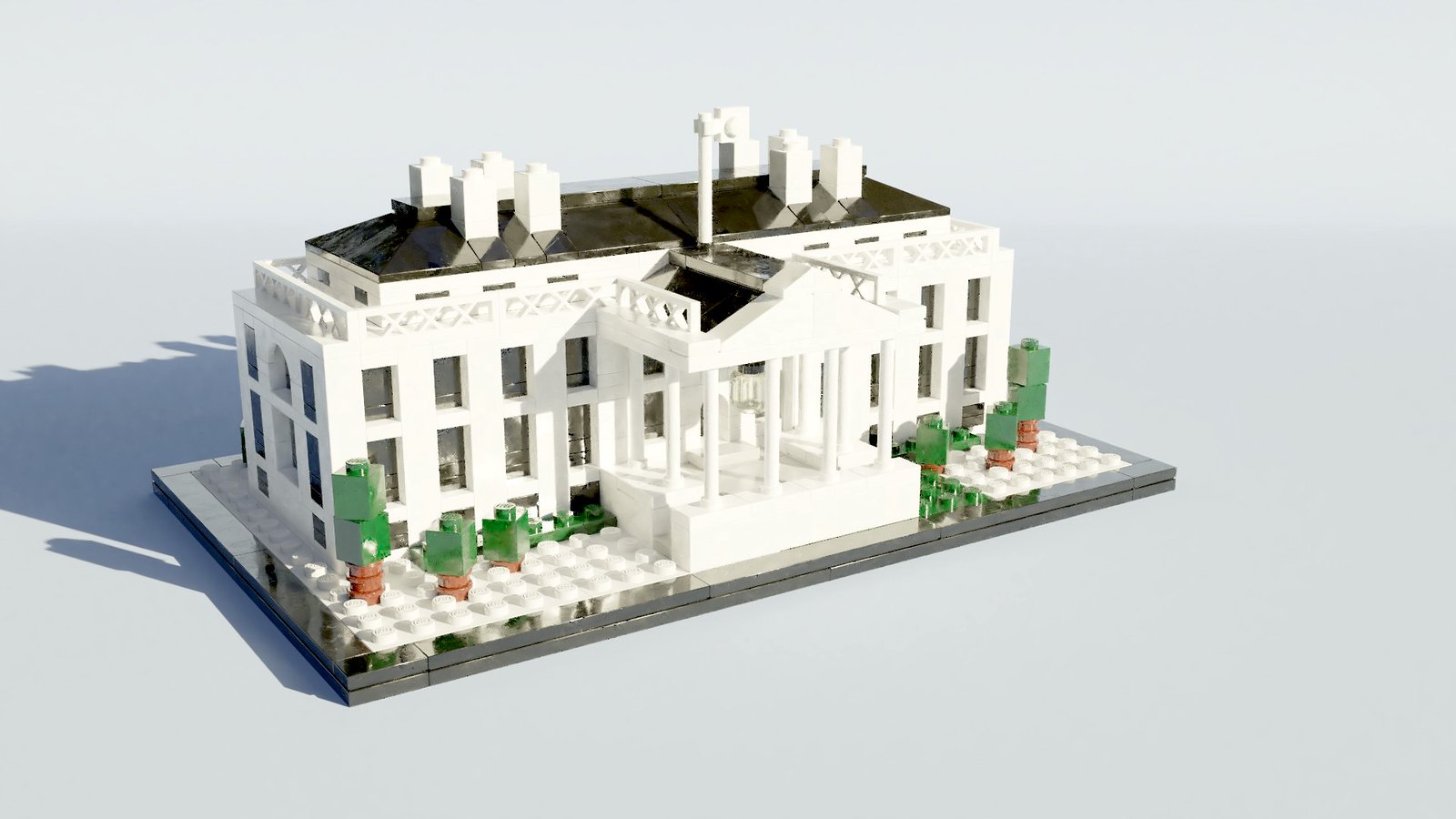 Although I rendered it before, I’d been wanting to see what I could do with it using Blender. Plus, I like the old architecture models. What I didn’t realize was how much of a challenge it would be to render.

My first challenge was building a scene. Since I was using the Mecabricks advanced add-on, I needed a backdrop for the model. I cheated by bringing in an old ground from a previous template. I tinted it so that it would stand out better against the white bricks.

With that solved, I then pulled in the model and tried to remember how to group it in a folder. After a bit of fumbling around, I remembered how. It wasn’t required, but I find it nice to collapse them when working on other aspects of the model.

I then choose a nice light probe with a decent sun in it. I wanted bright light in the scene and used a decent sized probe. I then turned on filmic and used denoising in an attempt to get a good picture. Then I rendered it. But, it wasn’t what I wanted.

The fear of death follows from the fear of life. A man who lives fully is prepared to die at any time.
– Mark Twain

Dealing with problems.
The first render looked decent, but had a large number of artifacts. Not satisfied, I decided to drop the denoising and turn up the samples. That didn’t work. Although I liked the look, it was still too grainy and introduced a ton of fire flies.

For the final version, I decided to turn denoising back on, but left the samples high. I also changed the filmic filter to a lower contrast to reduce some of the starkness of the scene. The higher samples reduced the artifacts somewhat while denoising provided a clean render without fire flies.

I like the final render as you can now better see the dust, dirt, color variation, and warping of the bricks. But, I did take the extra step of color correcting. This bumped the highlights while reducing the glare of the image. The image was now complete. If only I could mend my father-in-law as easily.