Inspiration flows from various sources. For some time I’ve wanted to create a messy model, one with greebles and imperfections. A space article about a moon—I don’t remember which—provided the push I needed. With Frank Sinatra’s In Other Words playing in my head, I headed over to Mecabricks and started building. 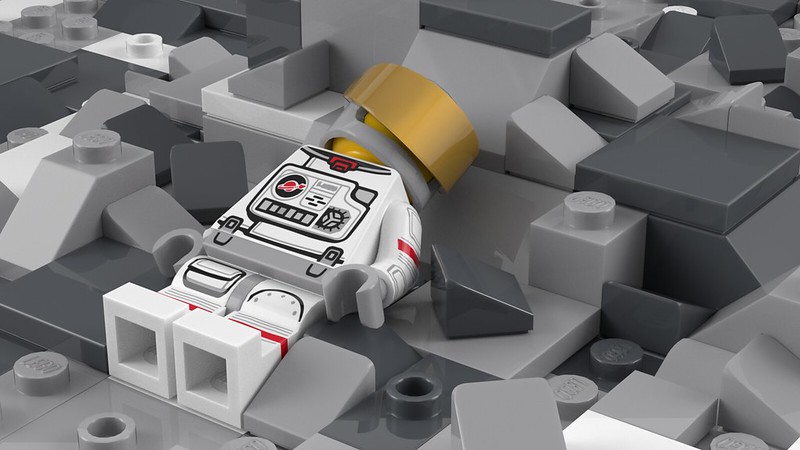 Lost on the moon by Steven Reid, on Flickr

Greebles and all that.
Although I wouldn’t call my older builds simple, they don’t have the same level of complexity that I see today. My models were more functional, tending be more minimalistic than realistic. I’ve been wanting to try the later.

I’d bet you’d agree that the moon’s surface isn’t flat. Rocks, sand and craters mar its surface, creating an interesting landscape for a build. The idea of a lost astronaut on the moon felt like a prefect way to try something less perfect.

I started with a couple of flat plates that I built upon with various bricks and colors. I had planned to smooth away the studs, but it became clear as I worked that leaving some looked better. In the end, there is a mix of studs, hole studs and smooth plates. Oh, and slopes—lots of slopes.

A lone astronaut.
Series 15 of the LEGO collectables featured an astronaut. Although I didn’t intend to use him, instead planning to use one of the old space minifigs, he just worked. I liked the stickers and look of the legs and torso. Yet, I wasn’t content.

Trying to be different, I changed the helmet to gray. For me it looks better against the suit and moon structures. I also dropped the tanks and changed out the face for the default LEGO one, no more beard. The goal was to leave the gender and race more ambiguous. Space travel should be inclusive, even if you’re lost on the moon.

And in case you missed the earlier reference, I did think about the ending of Space Cowboys. I wasn’t going for the same look, only a nod to it. Now that I’ve mentioned it, is that song stuck in your head too?

Rendering and sharing.
After finishing, I tried to render the model in Blender. Using the angle I wanted, I found that the moon’s surface left gaps. Back into Mecabricks I went, replicating and rotating the surface to cover the gaps. The final render complete, it was time to share.

I usually share my images on Mecabricks and Flickr, then here. The feedback from those communities is tremendous and encouraging. To my surprise, my moon diorama has done the best for me on both platforms. Both have the highest favorites or likes of any of models.

This is especially interesting given that I’ve been posting my renders to Flickr for over 7 years. To have one generate any interest at all is rare and one I am grateful for. I’m also surprised. I generally expect complex builds to have more likes. In this case, I seemed to have invoked something else.

In any case, it also was interesting that the community peeked under the hood of that visor to look at the face. Spoiler alert, the face is smiling. It even invoked an entertaining comment by ngriffin7a on Mecabricks.

’Twas the night before Christmas, and all throughout space, not a creature was stirring, save this poor lost (smiley) face.

I love it! I look forward to sharing my next model, whatever that is.