When I ran across Iain Heath's Brick-moji, there was this instant need to build them myself. My wife thought they were cute, which was enough for me. Not long afterwards, I had my first render of the face with its tongue sticking out and tears of joy. 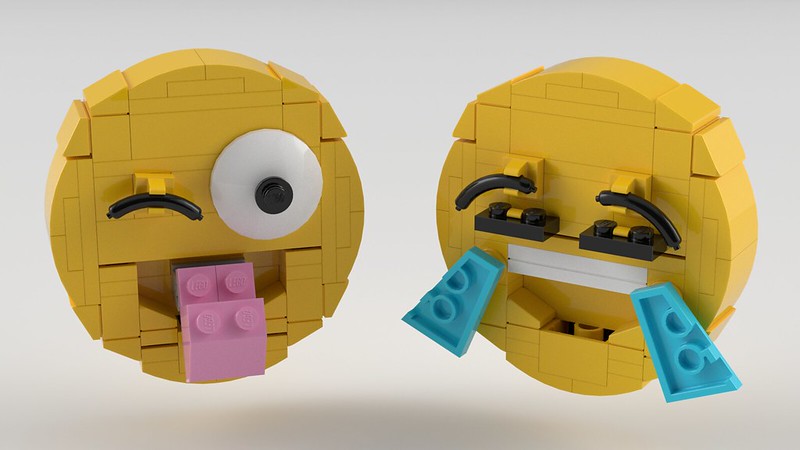 Seriously? Brick-moji!
Okay, I’m a big user of emoji in my writing—they add just a touch of emotion to written conversations. Some may disagree, stating that good writing can be just as emotional. Although I can relate, especially when working on my novel. But in this context, I don’t care.

Iain’s brick-moji are unique and interesting. In trying to recreate them, I found them quite complex. Outwardly, they look simple. Inwardly, they use interesting snot techniques to achieve their look.

They are superbly done and I applaud the thought and heart that Iain put into them. Cherry on the top is that he has offered the images into the public domain. How gracious.

In deciding which faces to render, I chose two with character and interest. I often use the tongue sticking out, especially when being snarky with my wife. That emoji is dear to me and rose to the top of my list.

Although I don’t often use the tears of joy face, the azure blue of the LEGO bricks just works well against the yellow face. Already planning to render two faces together, it fit well with my first choice.

What’s up is down.
It took me a few days to get the pair of brick-moji created in Mecabricks. It was a good test of my building skills as I figured out how to recreate the round edges. Although I used some snot techniques in my youth, they never reached the level I see in use today.

Let me say, these aren’t quite right. The 180 snot could use some tweaking to remove the gaps. Iain himself noted that, offering to break them down when he had a chance. I look forward to that. For me, though, the imperfections add to the silliness of the bricks.

Together, the two faces compliment each other. Is one sticking its tongue out at the other crying? Perhaps the tears of joy are from laughing too hard from observing the other’s crafted expression. Maybe not, but I still like the look.

To my surprise, my wife commented that I don’t share them enough on Facebook—her go to social media. Generally prefer Flickr and Twitter myself, I caved in to her request. To my surprise, my friends liked them. I guess she was right. Just don’t tell her.