Meandering around Flickr, I ran across a picture of Floating cube houses Havneby Rømø island Denmark by Arkitema Architects. With black walls and expansive glass windows, the design was striking. Inspired by the modern lines, I pictured how they might look in LEGO bricks. Below is the result of me acting on that inspiration. 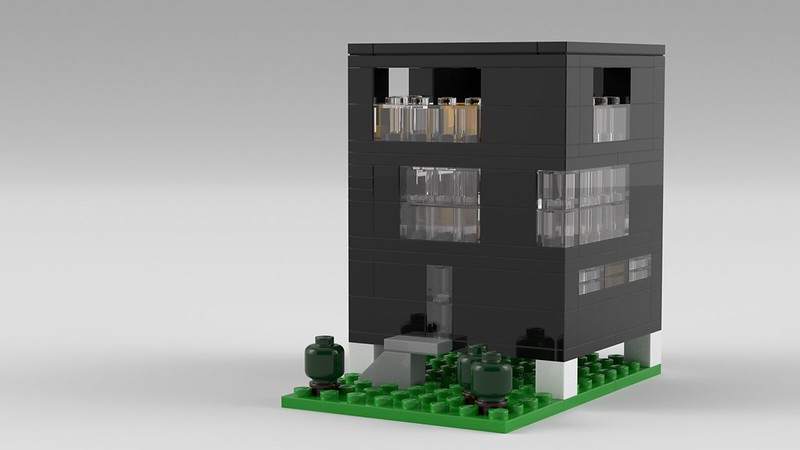 Floating House in LEGO by Steven Reid, on Flickr

Just Mecabricks and a couch.
This is now my largest original model created in Mecabricks. I’m getting pretty good at finding pieces and putting them where they need to go. I began with a much larger model, but decided it was too big and started over. I elicited some feedback from my wife, something modeling the couch makes easy, and a couple of hours later had a working model.

The idea of building LEGO models with a computer may seem odd to some. Taking a physical medium into the digital world isn’t always done well. Yet, the geometry of LEGO bricks yields well to the change. And, for me, it’s a ton of fun!

Now, let me start by saying that I don’t do this to avoid purchasing LEGO models. I own a ton of models, many of which sit on shelves in my office. But, getting them out to build new sets is a bit of chore. I don’t have the time or the space. Although I enjoy building physical sets, building a new set sitting on the couch can be quite satisfying.

Although I can use other LEGO CAD programs, LDD and LEOCAD come to mind, I enjoy building with Mecabricks. For one, it’s more intuitive. For another, I can work on a model on any supported device—computer, tablet, or phone. I don’t have to copy a file between devices and, once done, I can share and export as desired.

The only downside is that I have to have an Internet connection. That’s generally not an issue for me, but there are times, like flying, that would force me to use another program such as LDD. Since I can import that file, I’m okay with this one short fall.

Creating a photo from nothing.
The continued rate at which computers have grown in power is staggering. The fact that I can now build a 3D model on my phone still boggles my mind. It wouldn’t have seemed possible to me 20 years ago when I started modeling LEGO bricks on POV-Ray.

Although I’ve been creating photo realistic bricks for some time now, I can now achieve great results in a shorter amount of time with Blender. Note that they aren’t exactly the same. In POV-Ray, I’m was working with actual geometric shapes. A cylinder is a cylinder, not a mesh representation of a cylinder with smoothing. Yet, those methods come at a price—speed.

Using a mesh in POV-Ray, I can get similar speeds. In fact, I’ve been using them for some time on the more complex parts that don’t lend themselves to CSG (constructive solid geometry). CSG can yields better results, but the speed and improvements in 3D CAD programs is making this argument moot.

Another problem is that POV-Ray is a scripting language, not a CAD program. It was always a trial and error process of positioning and framing the final image. Once I got the hang of Blender, I’m sold on it. The hour or so of rendering at lower resolutions and adjusting shapes is now a 5–10 minute effort.

What’s next for this builder.
My intent was to create a role of these houses. Though, I’m not sure I like the final design. Those windows seem too think to me and hide the furnishings I added. Also, I need to check the piece colors and make sure they exist in reality. With a computer, it is too easy to create pieces that don’t exist in the real world.

Now, I just need to start capturing all these ideas I have so I don’t forget to actually do them. Good there there are lots of options for that too.