Up until now, all my Mecabricks work has been from me importing models. Sure, I’d tweaked a few pieces here and there, as I noted in my last post. Yet, I was still designing them in LDD and exporting them to render in Blender. LEGO model 352 is my first attempt at building something only in Mecabricks. 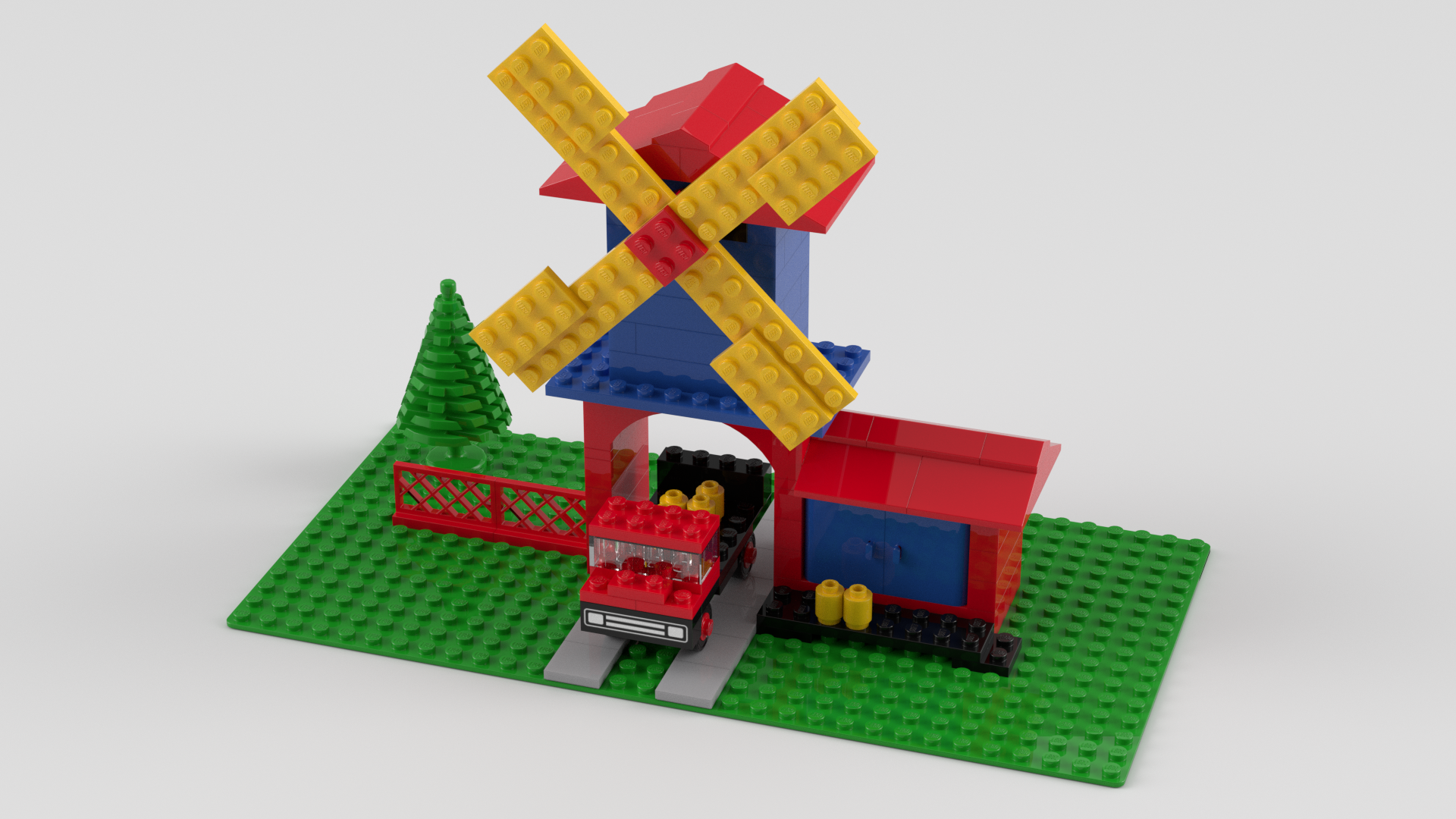 Released in 1972, Windmill and Lorry is almost as old as me! I love these old models. Perhaps it is the simple look that i find intriguing, or maybe I just have a soft spot for my childhood. Either way, I enjoying surfing through old instructions like these to render. This one, in particular, had been sitting in my browser for a few weeks. Now seemed like a good time to give it a try.

It did’t take that long to build the model. With a little practice, I was quickly moving and placing pieces around using the Mecabricks Workbench. That said, I did run into trouble placing a few bricks. If you have a piece selected when you add a new one, it places that brick nearby. If not, it adds the brick in the center of the grid. Because of the baseplate, a couple bricks were off. Mecabricks had a solution for that; I just used the included snap tool to fix that.

The hardest part was finding the pieces I needed. That isn’t to say Mecabricks was poorly organized. Just that it named them different from me. Once I got the hang of Mecabricks' terminology, as well as liberal use of the search function, that aspect subsided.

LEGO model 352 is my first attempt at building something only in Mecabricks.

One thing I discovered at the start was that Mecabricks didn’t have all the pieces I needed. This didn’t surprise me. My own library is incomplete and I’m always having to add new bricks. So, I compromised.

As a quick fix, I substituted what I could. The first piece added required me to give in. I had to use a different baseplate without the rounded edges. It didn’t matter, the newer plate is familiar to most people. My own perfectionism was getting in the way. I let it go as more missing pieces were on the way.

Some critical pieces, used by the windmill blades, were also missing. They were the old style wheels that connected into holes in a special 2x4 brick. Without that, I don’t have a windmill. The fix was to use newer pieces that mimic the old design.

I had the same problem with the tree. Being a rare piece, I didn’t expect to find it. I just substituted it with a modern tree—something I’ve done in the past. The lorry, a truck for us American’s, needed some alternate wheels. All these changes are minor and don’t detract from the final product.

Yet, there were some pieces I couldn’t replace. So I did the next best thing: I hid them. I could have used transparent pieces, or just left the hole there, but I thought it would be easier to not show them. They were on the back anyway.

One thing I noticed is that the Mecabricks developer is constantly adding new pieces. Because of that, I’m hopeful that that these get added in the future. Although, I’m sure he’s prioritizing newer elements over these 40 year old bricks. If I get desperate, I can always learn to model my own.

Generally, I’m finding myself getting from model to render faster now. I thought I’d feel less connected to my work using someone else’s pieces, but I don’t. Instead, I feel empowered to build more and worry less about the imperfections. In fact, my output is much improved—as you may have noticed from my blog posts.

Hold tight, there is more on the way!