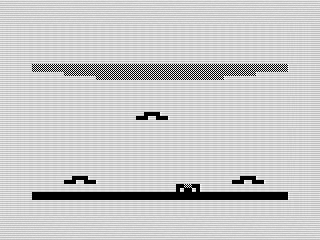 In 1984, I moved that Summer from Italy back to the US. As I was Flipping through my old printouts, I ran across one that I had marked as the last program I completed In Italy. How cool is that? Seeing this, I just had to make Raider V my program of the month for March.

I was a big fan of mechanized robots as a kid. My favorite comic was Shogun Warriors, from which I owned a number of the toys. I also enjoyed watching Daitarn 3 on Italian TV, a large robot that spat fire from its forehead. Although Raider V doesn’t look it, the name is inspired by those favorites. Raider was a play on Raydeen and every cool robot, or computer, had to have a number. In my case, a roman numeral. Can you tell I sometimes put more thought into the names than I did the programs themselves?

Raider V itself is an alien invasion, dodging game. The goal is to move your robot out from underneath the randomly falling ships (Raiders). The game ends if you don’t get out from under them. Although probably not intended, there are five (V) ships that fall. A pretty simple, yet effective game mechanic. The difficulty is based on how much you can move between the ships moving. If you survive a round, the number of moves decreases until they are in parity. A simple and effective game.

I actually like the overall look of Raider V. There is a nice symmetry between the sky and ground graphics. The falling ships look like birds or maybe robot birds of death. Okay, probably going too far there. Your own robot, reaching again, mirrors the other elements nicely. Given that the ZX81 is a monochrome computer, it is nice to see my using some of the hash blocks to make it feel more colorful than it is.

For my last program before returning to the States, I’m pretty pleased with it. Not too bad for a 14 year. I often wonder what I might have programmed with a more modern computer. Although, sadly, I might not have bothered to program at all given today’s modern video game consoles and the Internet. Fortunately, that isn’t the case.