Although I haven’t posted many picture lately, I haven’t been idle. Old, new, large, and small, I’ve been trying out a few different things over last two months. Of course, this was between working, running, and other projects. So, time to catch up! Here are five images to round our your day.

Something old.
Hailing from 1978, the 1589 Main Street is a great look back on the classic town sets of that era. A promotional set from the UK, I like the style of the buildings and it was a fun build. This was also the first time I used a string in Mecabricks. It came out okay, but I still need practice. 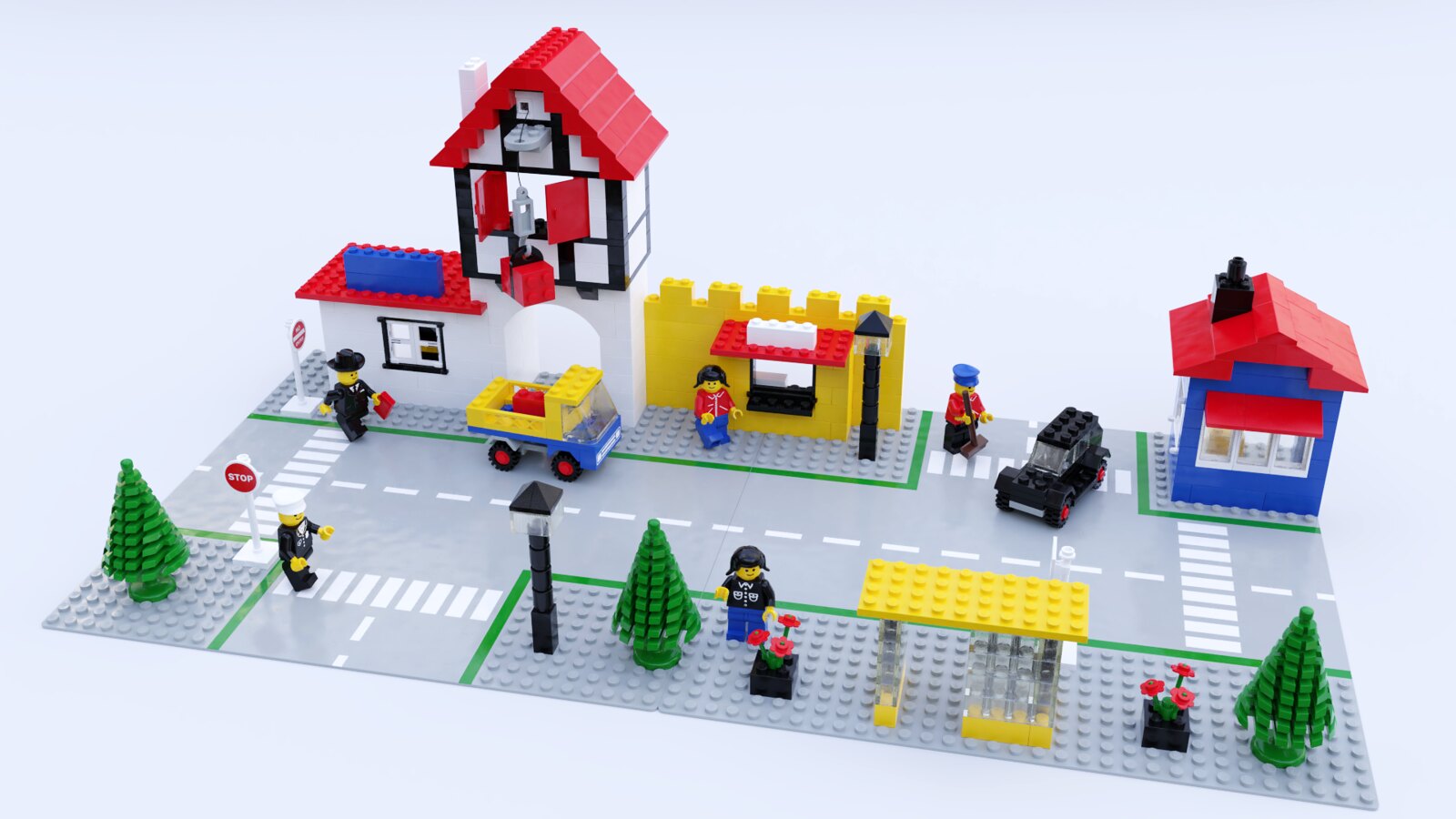 The set isn’t quite complete. There are number of missing pieces I had to substitute. Thinking they added little to the render, I left out the stickers. Not sure I still agree with that now, but too late to worry about it. In all, a great way to end October.

Something small.
855 Space Scooter is a great classic space set from 1979. As always, it’s nice to render sets I own, bringing back fond memories. Seeing this set again, I envisioned it floating above the clouds. Courteous of NASA, I grabbed a wonderful cloud photo taken from the ISS as the background. 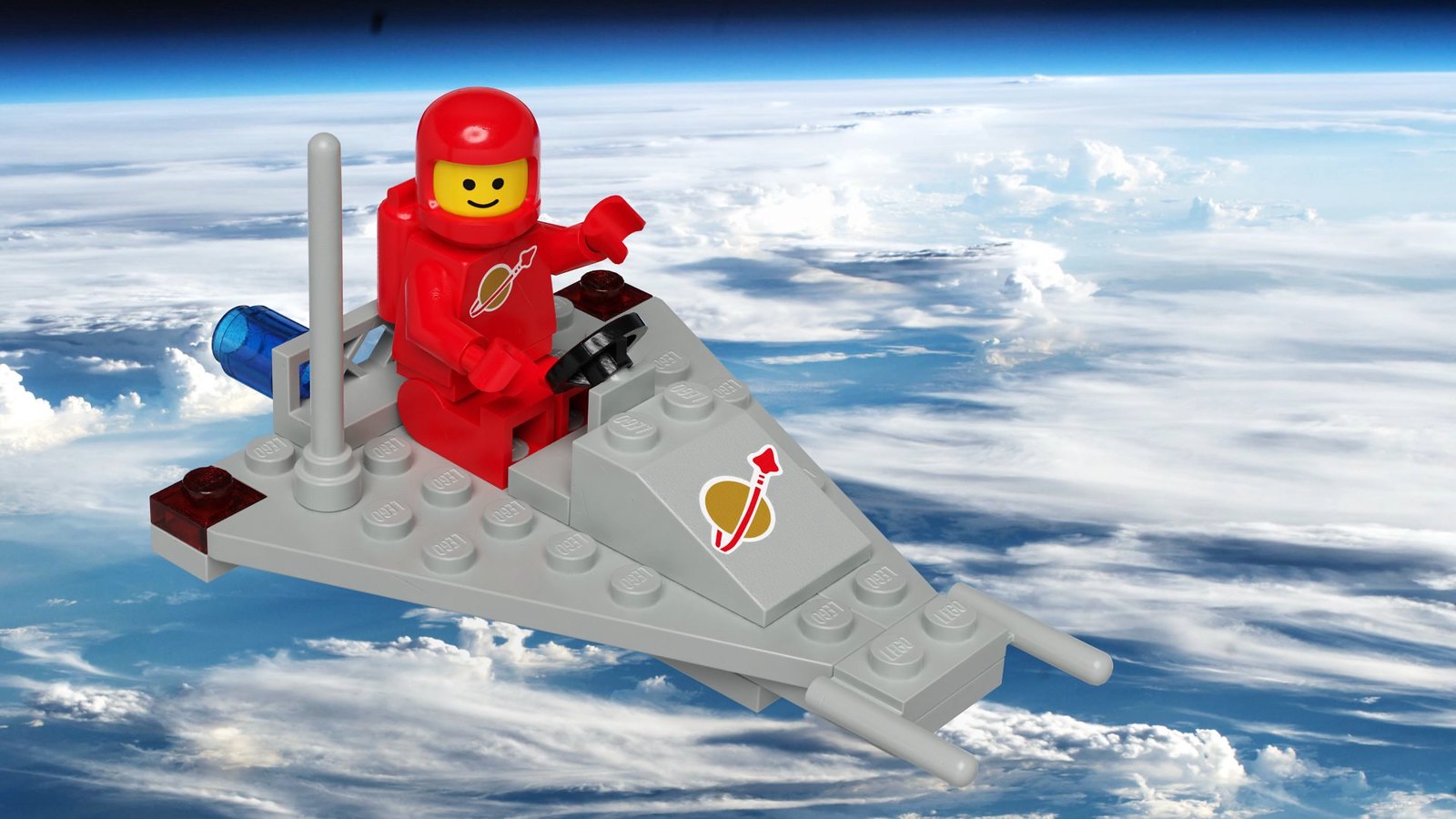 Something large.
Growing up, I had mixed feelings about the LEGO Technic sets. On one hand, they were detailed and interesting. On the other, the sets were generally ugly with odd holes and blocky designs. That said, I still desired them—owning quite a few. 855 Mobile Crane, 955 in the US, was one I didn’t get. What better way to celebrate this 1979 set then to build it long past my ability to buy one. 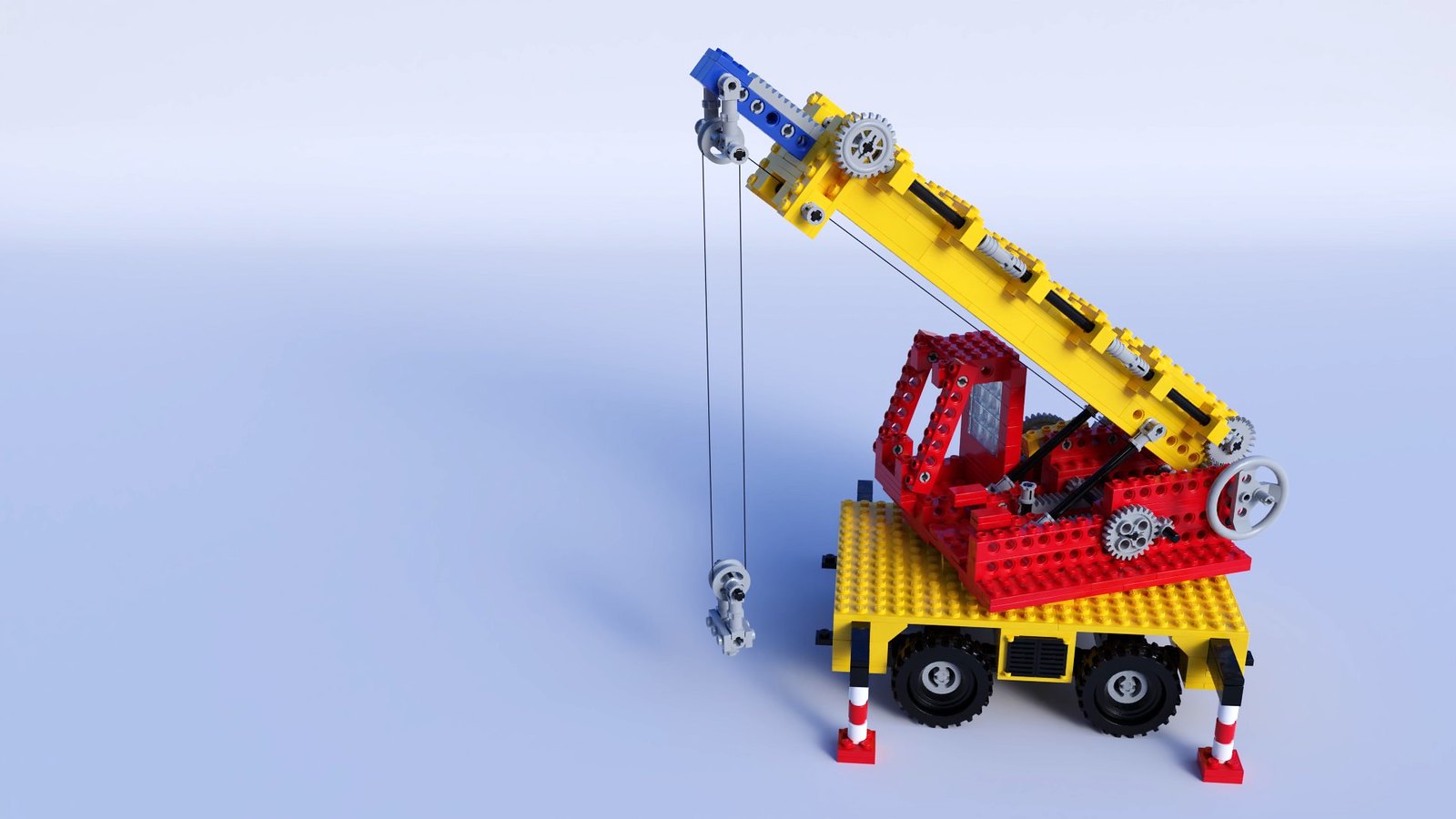 This was fun to build. But, I ran into the typical problems of not having all the pieces available. I substituted what I could, using some tips from other attempts. The tires are rather complicated, but look close to the originals. This became my second attempt to use strings, which were easier to represent this time.

Something newer.
Jumping into this decade, 4637 Safari Building Set is a modern look at how TLG has represented these sets over the years. Although for young builders, 4637 compares well with 699 Photo Safari. Adding two mini figures, including a female explorer, is a nice modern touch. Although a bit big, I like the jeep. Although, I’m not sure why there is a briefcase. 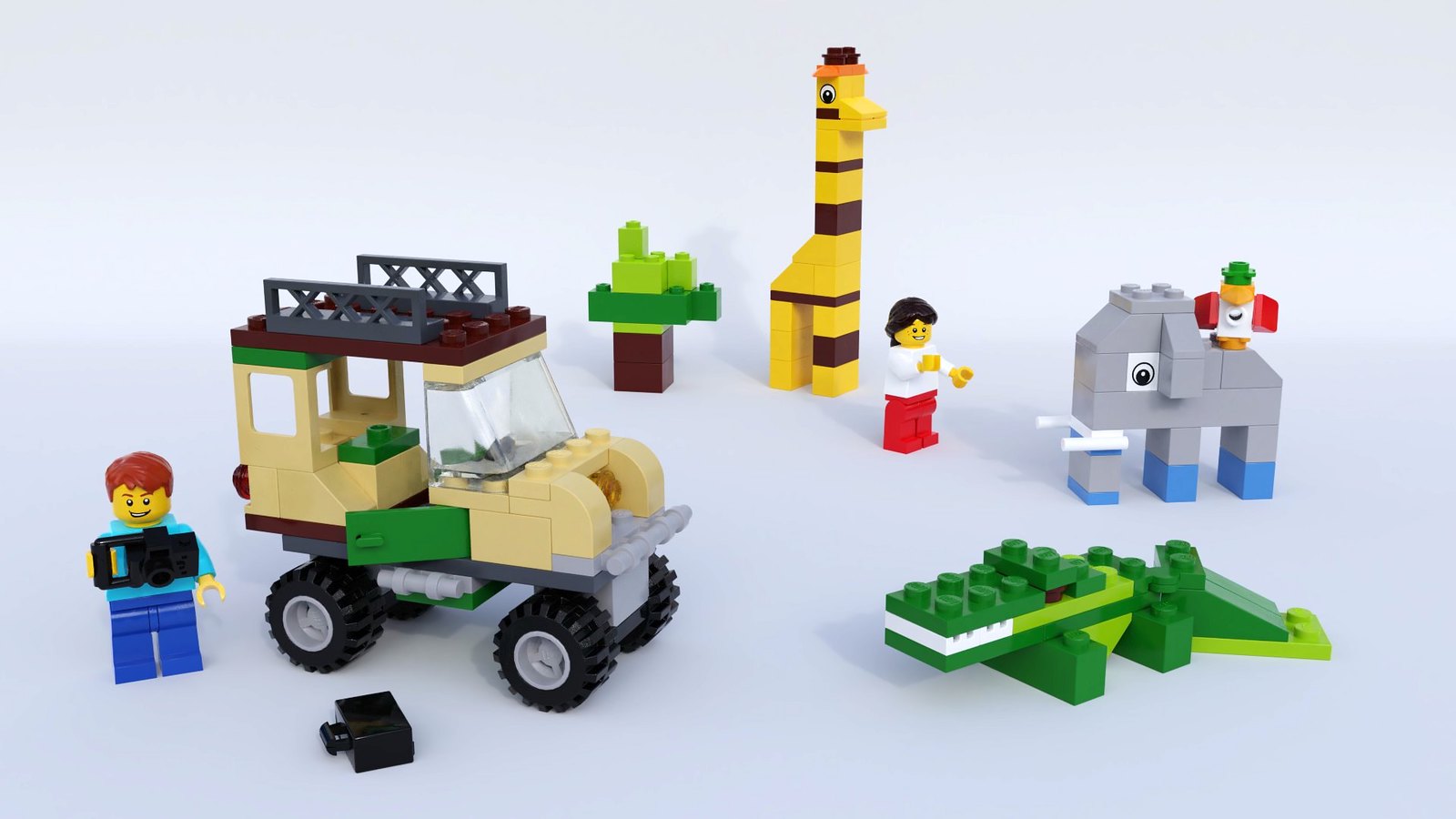 Only thing missing from this render are the t-shirts. I have the images, but need to put the time into converting them to use in Blender.

And, with those sets, I wrapped up November. I had wanted to share one more, but the image didn’t reach my expectations. I was reverting back to POV-Ray, using the latest 3.8 test build. But, it is unfortunate that as hard as I tried, I couldn’t reduce the radiosity artifacts enough to share.

Something new.
With December in full swing, the last model is a render of a great set by Carlierti. Created as a LEGO Ideas Project, he uploaded it to Mecabricks where it has been getting some notice. I threw other render into the mix using Scrub’s advance blender script. I had to dial down some of the textures. Fingerprints were a bit heavy this close up. Background is from HDRI Haven. 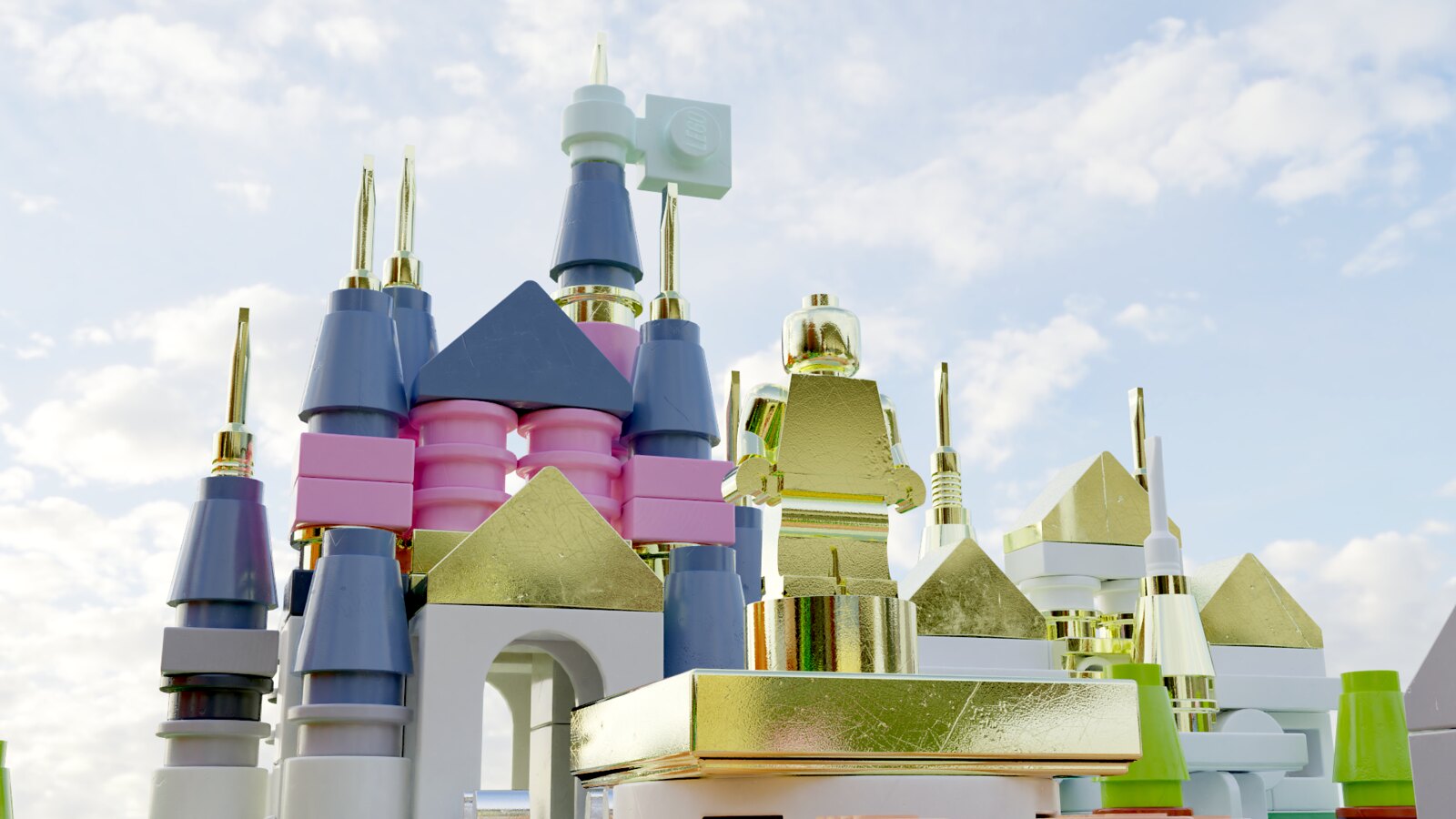 Disneyland Microscale by Carlierti by Steven Reid, on Flickr

I'd like to support Carlierti’s project, but it has since expired. It is still a great idea that gathered more than 6000 supporters. Great job, and I look forward to more of his ideas.

What’s next?
I have some more ideas already brewing. December usually slows down as the holiday’s approach, so I’m looking forward to some down time. I’ll try not to be as lazy on posting—but, no promises.