I continue to grow my skills in Mecabricks and, to a smaller extend, Blender. When I ran across What's missing? A New Hope on BrickSet, the Yavin IV model depicted intrigued me. Doing some research into the unreleased set, it ultimately led me to render my own version of it. 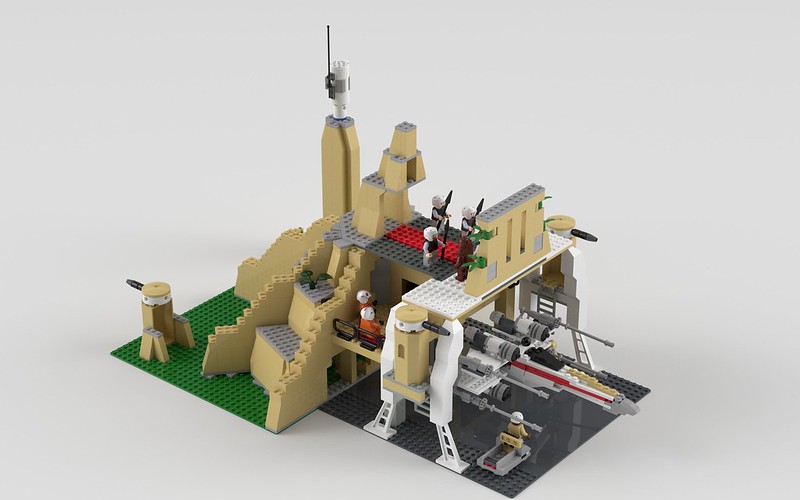 Yavin IV Rebel Base by Steven Reid, on Flickr

A twisted journey.
The intent of the BrickSet article was to talk about all the sets that could be, or should be, in the original Star Wars film. An interesting read that I highly recommend as it does a great job chronically the better of the Star Wars models around Episode IV. Although I have my own favorites and recommendations, it is still a fun read.

Towards the end of the article, it talked about the unreleased Yavin IV model from the LEGO Star Wars: The Visual Dictionary. I don’t have the book, but that one picture kicked me into research mode. I started searching around the Internet and, to my surprise, I found someone who’d actually built the model.

Even better, in the very first paragraph was a link to another MOC of the set, but this time using LDD. Wait, LDD? I could import that into Mecabricks. So off I went to see if the LDD file was actually shared. Guess what, it was! Joy and rapture. I downloaded it and got to work.

Shortcuts aren’t always short.
Of course, before starting anything I decided to check Mecabricks to make sure no one had already tried to do what I was about to. Nope, nothing there. With that based covered, I got to work importing the model. 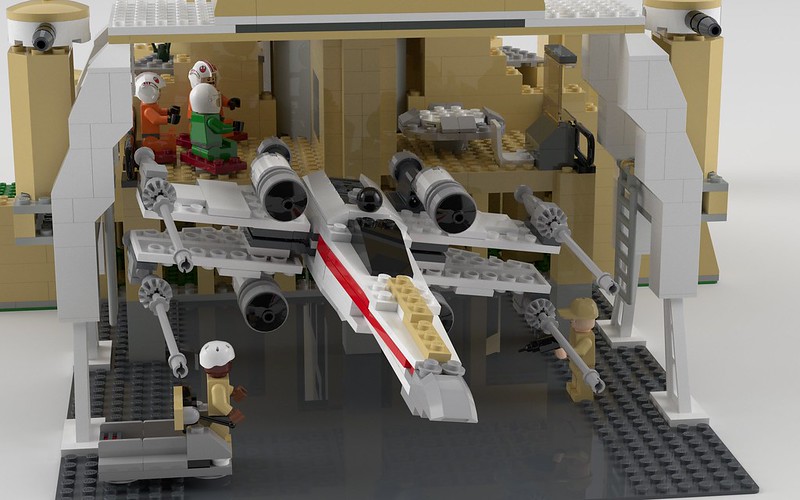 Yavin IV Rebel Base Up Close by Steven Reid, on Flickr

That done, It didn’t take long to notice that a few pieces were missing and colors were a bit off. Although the import generally works well, I wasn’t surprised that I needed to tweak a few things. Some things are easy to fix like—like missing faces, incorrect hand colors, or mis-matched head gear. Others weren’t so easy.

For one, Mecabricks didn’t have Chewy, nor did it have the Ewok stand in from the original LDD file. I dug around for awhile and landed on using a superhero head with some alternate coloring. It works, but prevents me from doing closeups. Not that I really could. I needed better shirts and helmets to truly make it look good.

A bigger problem, though, was the lack of two critical pieces. One was a large plate that the flight briefing sat on. That was easily fixed using two smaller pieces. Although, I’m sure that if you tried to build the model with those plates it wouldn’t work. No matter, they are a good enough stand in.

The other problem, and ascetically more difficult one, was the lack of the crane supports. The piece acts as the hanger walls, without which the model just looks wrong. Time to jump in and craft a suitable replacement. Digging through Mecabricks, I found some good lower supports that fit well. Then, I filled in the rest with slopes and other construction.

Perhaps not as true to the original design, I actually like the construction. With that part done, it was time to export and render this puppy. Fortunately, that was an easier task. It took just a few minutes for me to position it. Unfortunately, it took quite a long time to actually render it. The wait was worth it.

Gem in the rough it is.
Yoda pun aside, the model is as the book states: an unreleased sketch model. In some ways, the model is great as is. Combining exterior and interior settings, the rebel base has a lot of potential There are at least four different areas that make this set very playable.

The exterior is probably the weakest. The scale is off with the turrets. You could place a figure in them, but why? It would look odd. It doesn’t help that there are no trees and the eagles nest that the rebel’s watch the launch from is missing.

In contrast, the hanger is the best, more for what is in it then the area itself. That X-wing needs some adjustments, but is otherwise a good looking set. I also like the skid and other figures scattered around. Adding some cargo and other details would make the back a stand out feature. It wouldn’t surprise me if LEGO came out with just the hanger as a set.

In the middle area, you get the mission briefing on one side. A number of rebel pilots sit around the computer listening to how they have to shoot at a tiny hole on a moon sized machine. On the other side is the tactical room where the rebels waited for the Death Star to come within range. Together, they make up a good portion of the movie.

Lastly, on top, is the medal ceremony. The battle over, you can relive the closing scene with all your favorite characters. Okay, perhaps not what most people will want to relive, it is a nice touch and fits with the overall theme of the model. That said, I don’t see the droids in the picture. Hopefully they are there as well.

What’s next for the set?
As noted in the original article, the upcoming Rouge One movie will prominently feature Yavin IV. The backdrop for a lot of the action, I hope LEGO will take the opportunity to bring a set or two of the rebel base to life. Until then, I might just have to go build my own MOC.

Hi!
This is awesome, do you have the instruction or at least parts list???

If you visit the link in the article, you can grab the original LDD file. But, in case you don’t have LDD, I built instructions and exported the parts list for you.